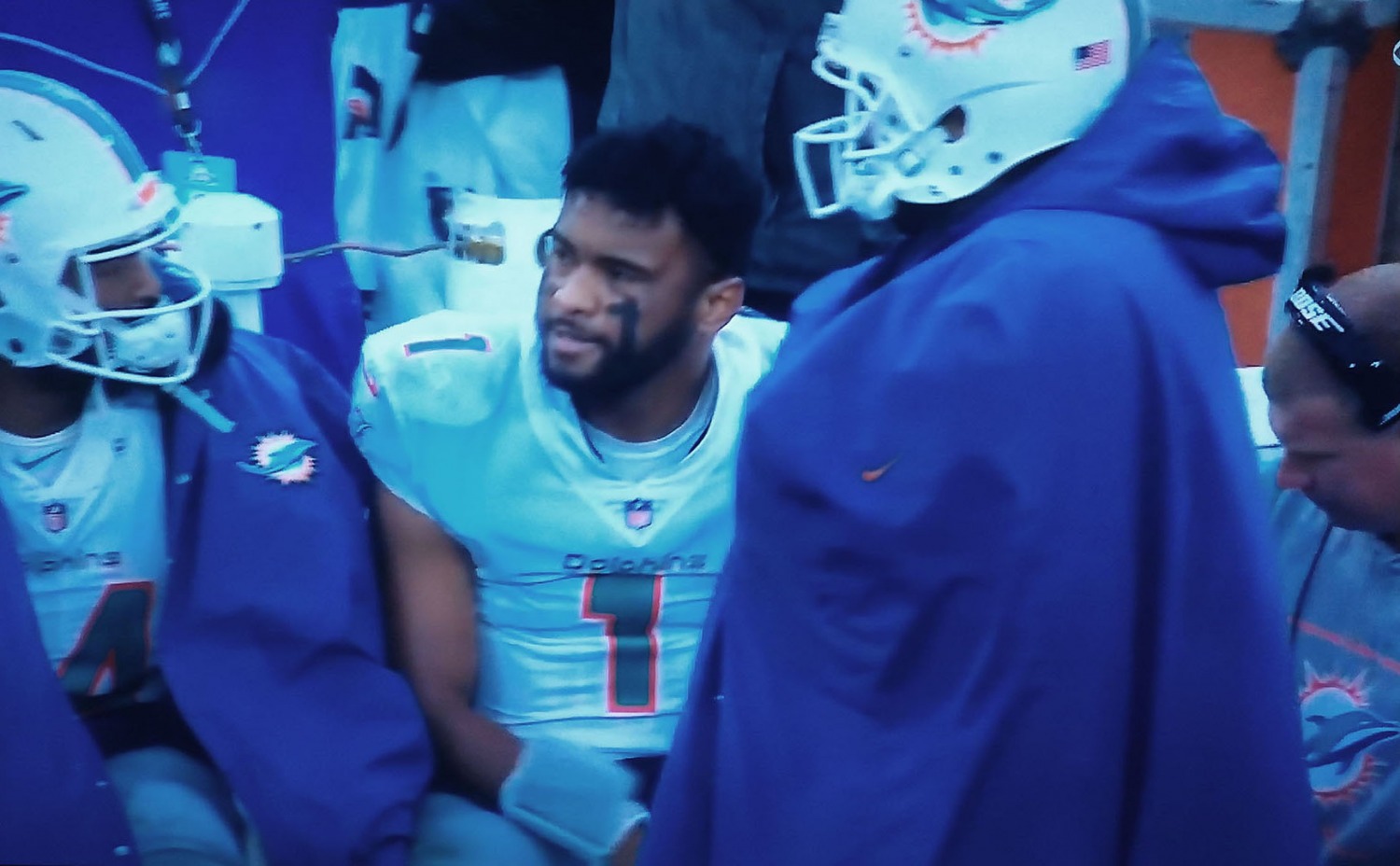 It wasn’t just that the Miami Dolphins failed again with a chance to break out of the “Same Old Dolphins” mold.

The bitter pill in the 34-3 debacle Sunday at Tennessee was in revealing how far the Dolphins are from being a legitimate playoff team.

Just as it was in each of their three playoff appearances since they last won in the postseason 21 years ago.

Sunday in rainy, chilling Nashville was the Dolphins’ de facto playoff game of this season, and the gap was as wide as the score suggested against a Titans team that celebrated a division-clinching win and at 11-5 stands atop the AFC seeding.

A lot of wrath in the Dolphins’ undoing is being directed at quarterback Tua Tagovailoa and the offense — and rightfully so. The real gut punch, though, was seeing the Miami defense, often dominant during the seven-game winning streak, get overrun by the Titans.

Part of that reflects on the inadequacies of the offense putting the defense in an untenable position. Nonetheless, the Dolphins gave up 198 yards rushing to a Titans team still missing Derrick Henry and managed only one sack and little pressure against Ryan Tannehill, who’d been sacked 45 times coming in.

Dolphins stuck in rut of mediocrity

In the biggest moment so far in the Brian Flores era, the Dolphins couldn’t handle the weather, adversity or any challenge presented by the opponent.
So the uplifting seven-game winning streak after a seven-game losing streak is relegated to a footnote in another disappointing Dolphins season.

What a strange, roundabout journey to find themselves at 8-8 and still stuck in the same rut that has defined the Dolphins for more than two decades and counting.

Fitting that the final nail in the coffin of dead Dolphins playoff hopes was put in place by Justin Herbert and the Los Angeles Chargers with a 34-13 win over Denver.

Any mention of Herbert inevitably leads right back to Tagovailoa, who the Dolphins selected instead at No. 5 in the 2020 draft.

The comparison with Herbert is irrelevant at this point. The issue to consider is about what the Dolphins saw in Tagovailoa when they drafted him — clearly the pivotal moment early in the partnership of Flores and GM Chris Grier to pick a quarterback to lead them to contending for championships.

Two seasons of Tua hasn’t brought a resounding endorsement of the decision. Consequently, quarterback will again be at the forefront of what figures to be an interesting and unpredictable offseason.

“People have their own opinions,” Tagovailoa said after Sunday’s game on the question of his future as the Dolphins quarterback. “I’ve heard this the entire time I’ve been here. At the end of the day, I can control what I can control, which is to be the best version of myself.”

Tua had the chance to do that Sunday. It was right there for a defining performance to shove it to his critics.

Instead, Tagovailoa produced these numbers in the first half: 6 for 16 for 71 yards and a fumble lost when the ball slipped out of his hands while trying to throw, contributing to a 17-3 deficit.

There was still a chance make a game of it early in the fourth quarter with the score the same. But after hitting Jaylen Waddle on a beauty of a deep strike for 45 yards, Tua took a sack (he fumbled but the Dolphins recovered) on a strange flea flicker and then had a miscommunication with DeVante Parker on a throw to the end zone.

A fourth down pass to Parker that should have brought a flag for interference didn’t, and the moment was lost.

And with it the chance for Tagovailoa to put his stamp on his future with the team was lost.

tua to waddle for a big play pic.twitter.com/EKN5yGTkCD

Tua is a likable figure, and I was hopeful he was going to be the answer to the Dolphins’ long search for a championship quarterback. I liked his accuracy at Alabama but was wary of his injury history in college.

He has shown uncanny accuracy — when not operating in rain and high winds — at short range. He also has a tendency for head-scratching mistakes.

Ultimately, the question is, how far can he take this team?

From what we’ve seen, the answer seems to be, to the fringe of playoff contention.

That’s well short of the stated goal of this Dolphins rebuild. Certainly not enough to perpetuate the Flores/Grier regime. Because it won’t satisfy owner Steve Ross, who at age 81 has no luxury of patience.

Any team that starts a season 1-7 as the Dolphins did has multiple needs. The offensive line remains a problem and it’s about time they added a legitimate running back in the offseason.

But quarterback will be a big focus and expect a lot of speculation again about Deshaun Watson in the coming months. Whether it ends up being the exiled Texans quarterback or someone else, look for a changing of the guard leading the Miami offense in Week 1 in September.

Jobs are at stake. What Tagovailoa can control hasn’t been good enough. And the Dolphins are still stuck in the same old rut.