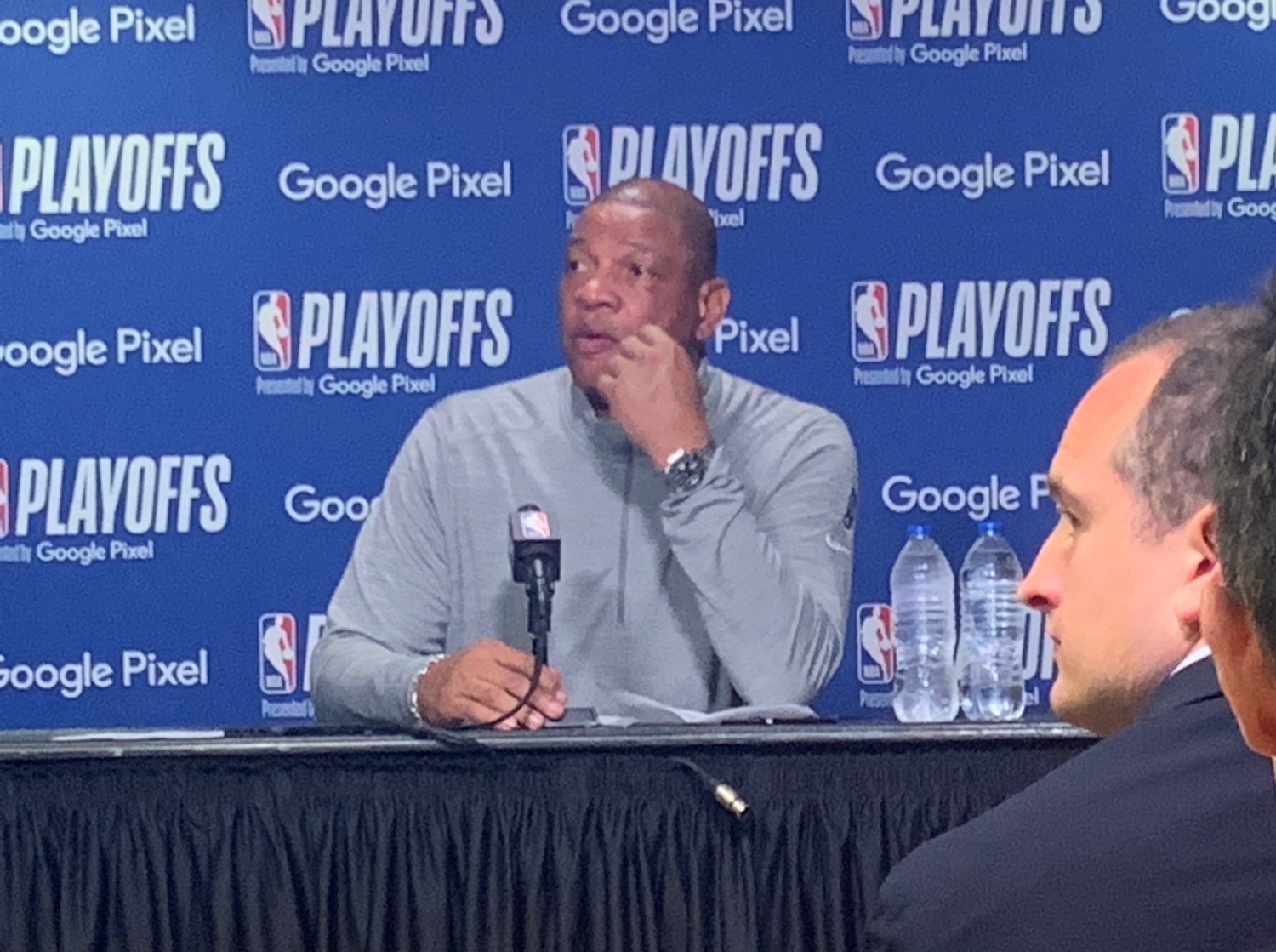 True to form, Doc Rivers’ team got schooled in their building.  The first signs of the Philadelphia unfaithful turning on the team were midway through the third quarter as they booed the embarrassment inflicted on their eyes.

Embiid hit the ground more than a soldier trying to evade gunfire.   The Beard looked like he was planning his postgame affairs.  And Rivers’ bald head was the only bright spot for Philly in Game 6.

With 9:13 left before the end, ESPN’s cameras caught a peek into the 76ers’ huddle.  Doc pleaded to his group, “Fight for this! Come on, guys. Fight for this!”  But his group looked as deflated as the Hindenburg.

Jimmy Butler– the one who slipped through their fingers-  was merciless leading his outfit and attacking the interior on cuts and torching Philly’s drop coverage in the midrange. With a minute left, #22 waved goodbye to the crowd as Miami inched closer to its eighth conference finals trip since 2005.

As expected, one of the excuses cited by the 76ers at post Game 6 press was that this version of their team had not been together for much time. James Harden said, “We tried to build a championship contender so fast, which I still think we are, we’re just missing a few pieces, but other than that you try to go for it right away…”

Sure, by default, their second-best player was not integrated into the rotations during training camp and had to learn the playbook at an advanced pace.  It probably wouldn’t have made much of a difference because when matters went sideways, Harden showed who he is at those times, too small for the moment.

This was the 10th time in the Beard’s career that he’s had zero free throw attempts in a playoff game indicating that his abilities as an escape artist are on par with Harry Houdini.

The 76ers are no closer to winning a title than when Embiid and Ben Simmons first started sharing the court in 2017. This futile effort by their big-man suiting up four games might do the trick in convincing supporters or even ownership of that reality.  But what can’t be unremembered is that Embiid is a super freak who was used up by his club.  His face was battered, his thumb on his shooting hand was compromised and he was finessed into thinking this was worthwhile.

Before the 76ers left Miami, I asked Embiid at post Game 5 press about how much a spiked ball to the face deterred his interest in bludgeoning the rim.  He said, “I don’t know.  I’m just trying my best, honestly.”

Responding to another reporter, Embiid said he’d be called soft if he didn’t play, or if he did, they say he performed poorly.  Some might knock him for worrying about the media, but he’s human and words can be sharper than a spear.

Right on cue, Charles Barkley claimed Embiid was ineffective because he was distracted by not winning the MVP award.  For reasons I don’t understand, people listen to Barkley give his drivel on the game when all he does is dumb down the audience.  If only he had a clue into how much Embiid cares.

Joel’s honest answers further enlightened my understanding of him as a warrior.  It made me uncomfortable to watch him squirm on the ground in pain as he was attended by his team. Then he got up.  And he still languished in the second half of Game 5.

Rivers did not consider sitting his best man the rest of that night following the close call.  I know because I asked him and sternly said no.

In the second half of Philly’s downfall, the 76ers couldn’t stop Miami from getting two feet in the paint, where Miami made 15/21 baskets.  The home team was outscored 50-42 in the final 24 minutes.

The playoffs never fail to show the public which teams are for real and who thought they were.  Miami’s got next with the winner of the Boston-Milwaukee series that’s 3-2 in favor of the champs.  If only Philly could have had more to say about it.

Download the PrizePicks fantasy sports app for free and use the code “five” to get your initial deposit matched up to $100.