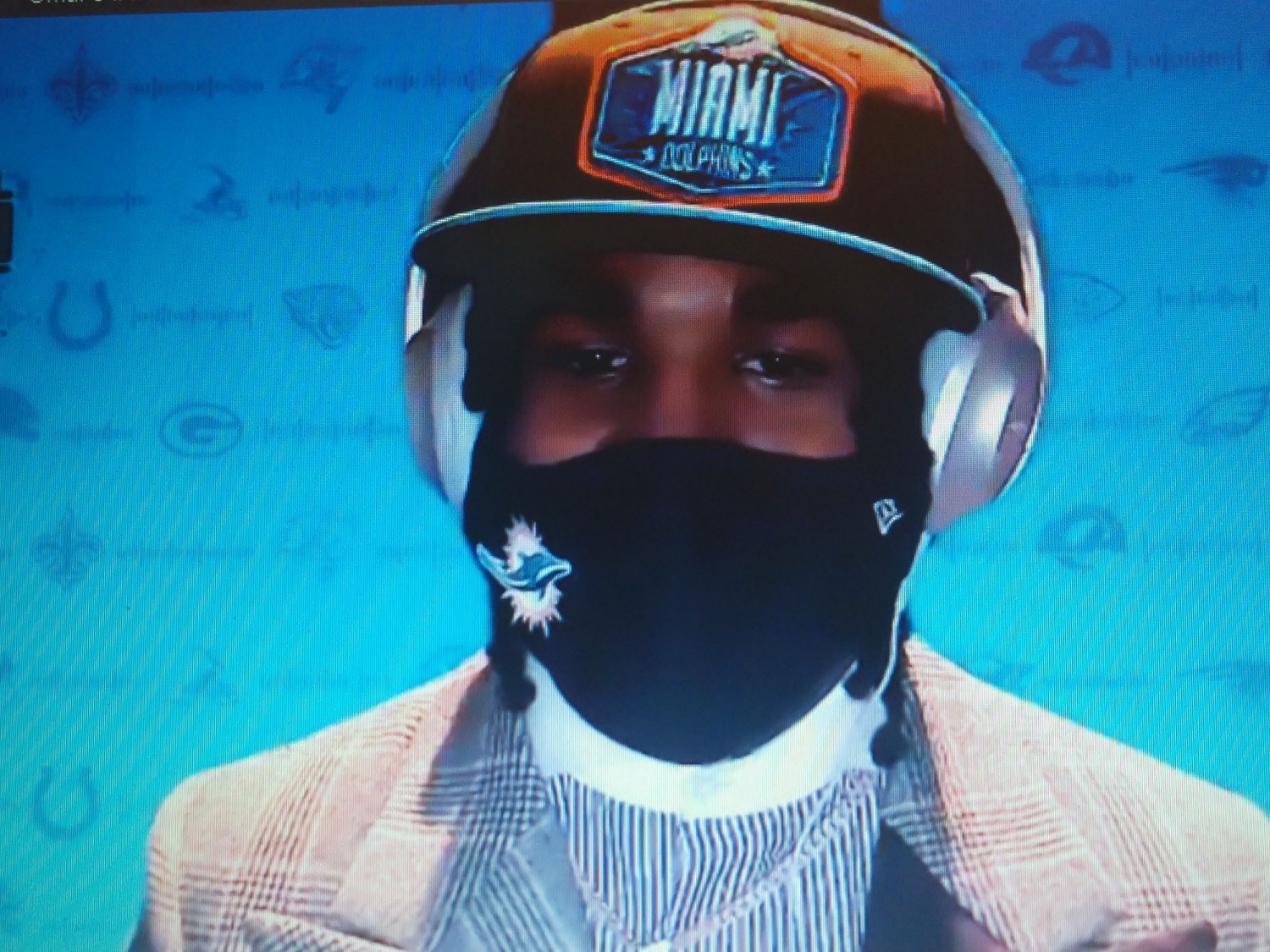 The Miami Dolphins addressed a pressing need right out of the gate Thursday in the opening round of the NFL Draft when they selected Alabama wide receiver Jaylen Waddle with the No. 6 pick.

They rolled the dice for a big-play target for Tua Tagovailoa in his former Crimson Tide teammate.

Waddle made the point when asked on ESPN about his primary asset moments after the pick was announced.

“Playmaking ability,” he said. “I’ll do my best to try to showcase that.”

They got another playmaker, this time on defense, when they took University of Miami defensive end Jaelan Phillips at No. 18. Phillips, who played one season for the Hurricanes, was the first pass-rusher selected.

Both players are impressive athletes who come with some questions. They were both fan-pleasing picks, focused on glamour positions of both sides of the ball.

Regarding Waddle, the intriguing question will be whether the Dolphins made the right choice from a premium array of top-tier receivers.

The Dolphins clearly put their money on speed, which is never a bad bet.

Through pre-draft trades with San Francisco and Philadelphia that took them from the No. 3 pick to 6 by way of 12, they moved themselves out of the running for Florida tight end extraordinaire Kyle Pitts, who was the first non-quarterback taken at No. 4 by Atlanta.

LSU receiver Ja’Marr Chase was then reunited with his college quarterback, Joe Burrow, with the No. 5 pick by Cincinnati.

Then came the Dolphins with the choice between speedy but slight Alabama receivers. They opted for Waddle over Heisman Trophy winner DeVonta Smith, who eventually went 10th to the Eagles.

The fun will come in comparing the careers of this group in the coming years. That is the measuring stick of the draft.

Similarly, Tagovailoa faces questions about whether the Dolphins erred last year in taking him over Justin Herbert, who went to the Chargers one pick later and had a record-setting rookie season. The final verdict is still on the horizon.

This time, Pitts was my preference for Miami, but the Dolphins opted for a receiver with explosive speed who can stretch the defense deep or turn a short route into a big gain. Waddle has the ability to create separation through acceleration, which was notably missing among Dolphins receivers last season.

A stat that stands out is Waddle averaged 9.8 yards after the catch during his career, the most among all Power 5 receivers since 2014, according to Pro Football Focus.

“I get a lot of comparisons to Tyree just because of our small size and being able to be a runner,” Waddle said in a conference call with South Florida media Thursday night. “But I want to be my own player and try to play the game that I play. … So I think I’m going to try to be the player I always have been and try to make plays for the team.”

Waddle gets a head start in that he already has chemistry with Tagovailoa, as would have been the case if Smith had been chosen.

If Waddle didn’t break an ankle in October, maybe he wins the Heisman. Through four games, he was putting up better numbers than Smith, averaging 139.3 yards a game and 22.3 per catch.

Which will become the better pro? The Dolphins saw enough to make a distinction in their evaluation.

Give him bonus points for returning to limp through the national championship game and contributing three catches. He didn’t participate in a pro day but says he’s over the injury.

As with Smith, there are questions about Waddle’s size. He is 5-9 ½ and 182 pounds. Similar stature hasn’t hampered Hill or others like Hall of Fame receivers Marvin Harrison and Isaac Bruce.

Soon-to-be-teammate Phillips offered a defensive player’s view on Waddle, saying, “He’s a dog. I’ve been watching him for a little while now and he’s just electric, man. He’s a playmaker through and through. I was super-excited to get to know him. I know he’s going to contribute to this team greatly.”

Jaelan Phillips: no place I'd rather be than the 305 after being picked by the Dolphins. pic.twitter.com/Xlpzldr0C2

Phillips, who expressed joy about remaining in the 305, comes with a troubling injury history while at UCLA and it appeared his football career was over before resurrecting it at Miami.

He showcased his pass-rushing skills last season and put on a dazzling performance at the UM pro day, which certainly elevated his draft stock.

“I had two concussions while I was at UCLA. I play football, man, it’s a physical sport. Ask anybody in the NFL, I guarantee they’ve had some concussions in their time. It’s nothing to be worried about,” Phillips said Thursday night.

The physical aspect of the game means nothing is a given beyond draft day.

The Dolphins added obvious talent at two vital skilled positions to start this draft. They have six more picks over the next two days.

The rigors of football will determine how it all plays out.