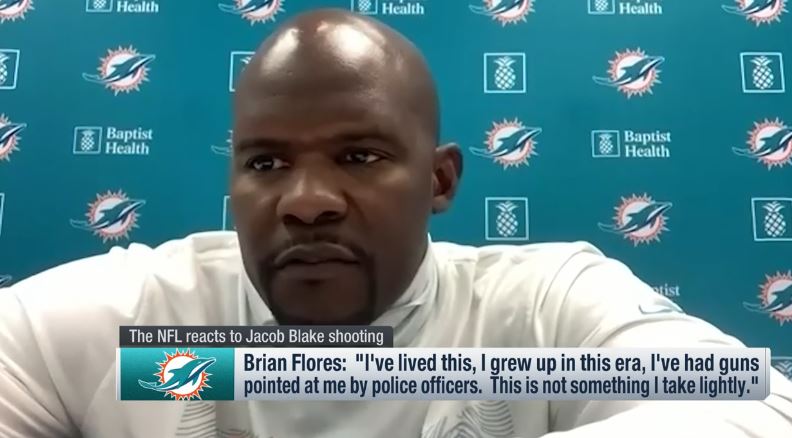 This football season is about a lot more than football. The stakes are much more complex than vying for the playoffs.

For South Florida, that was underscored last week when the Miami Dolphins began a practice with a 20-minute discussion on the field about racial injustice in the wake of the police shooting of yet another Black man — Jacob Blake, in Kenosha, Wisconsin.

Unlike some teams which canceled practice for a couple of days, the Dolphins elected to continue doing their jobs while adding their voices to a societal issue long overdue in coming to the forefront in this country.

“We spoke as a team. We understand there’s a lot of things that are not where they need to be right now. It pains us,” said Dolphins coach Brian Flores, a Black man of Honduran descent who grew up in Brownsville, Brooklyn, one of the roughest parts of New York City.

“I lived this. I grew up in this era. I’ve had guns pointed at me by police officers. This is not something I take lightly. We need change. That’s where I’m at on that situation.”

Football, a sport dominated by Black players, finds itself smack at the crossroad of the national divide regarding racial issues and the coronavirus pandemic, which has disproportionately impacted minorities in the United States.

The movement Colin Kaepernick started four years ago in protest of police brutality, which drew major pushback and cost him his job as an NFL quarterback, now drives the conversation throughout America’s sports leagues.

The NFL season is less than two weeks away — the Dolphins open Sept. 13 at New England — and the discussion surrounding the team is a disparate salad of roster competition, politics and public health concerns.

All Tua needs is time

In a normal year, all of the focus around the Dolphins would be on roster battles and the depth chart, such as the status of rookie quarterback Tua Tagovailoa.

A year ago “Tank for Tua” was the alliterative obsession of Dolphins fans and media in the belief that if the team lost enough it might have a chance to draft the would-be savoir quarterback from Hawaii by way of Alabama.

Remarkably, it happened. The Dolphins, two decades into their search for the next Dan Marino, ended up with Tagovailoa.

Curiously, there were rumblings of concern on social media when Tua received mixed reviews in the first two weeks of training camp and had an unimpressive performance in Saturday’s scrimmage while running with the first team in the absence of veteran QB Ryan Fitzpatrick, whose mother tragically passed away earlier in the day.

But astute fans understand there is no rush with Tagovailoa — that’s why Fitzpatrick is here this year — and there is no sense in rushing to judgment during training camp. The important take on Tua right now is he is showing the mobility to suggest the major hip injury is mostly behind him, though Flores said Tuesday he is being cautious with the rookie and his health history is still a determining factor in when he’ll play.

That Tua’s talent will reach its zenith is more predictable than most questions in this season of uncertainty shrouded by a pandemic.

And it’s not just NFL football.

Views on the Raekwon McMillan trade

Football has been turned into a political football in matters of the nation’s health, national politics and the national anthem.

We have a president, whose approach to the COVID-19 crisis has been to mostly ignore it in the belief it will eventually go away, bellowing that it would be “a tragic mistake” if college football doesn’t go ahead with the season.

Curiously, his call for colleges to play ball singled out the Big Ten, which coincidentally plays in Midwest swing states that are vital to his reelection chances.

The premise is that youth and overall health of young athletes will help them avoid the most serious symptoms of the coronavirus.

Nonetheless, the athletic department of Iowa, a Big Ten school, announced Monday it is pausing workouts for all sports until after Labor Day following a major surge in coronavirus cases. The department reported 93 positive results out of 815 COVID-19 tests taken between last Monday and Sunday.

Meanwhile, a group of eight Nebraska football players filed a lawsuit against the Big Ten seeking to invalidate the conference’s postponement of the fall football season.

They are part of a growing #WeWantToPlay movement that prominent college players have joined in response to the Big Ten, Pac-12 and several other conferences delaying their seasons.

The NFL ditched the preseason but is proceeding hell-bent on starting the regular season on time. It won’t be business as usual, though. The Dolphins are among few teams planning to allow any fans at games, limited to 13,000 at least initially.

Notably, they won’t have to contend with a hostile crowd at Gillette Stadium in the opener. The Patriots won’t have fans at games, at least through September.

That won’t be the only unusual look NFL stadiums this fall. The league announced this week that end zones will be inscribed this season with two slogans: “It Takes All Of Us” on one end line, “End Racism” on the other as  part of its social justice awareness initiatives. The league will also allow similar visuals on helmets and caps.

But, if teams are able to keep COVID-19 at bay — and that remains a notable if — there will be the mundane matters of football to bring some sense of normalcy to autumn.

For Dolphins fans, the question of when to take the wraps off Tua will receive most attention. Of greater consequence to the local football product will be the verdict on all the other newcomers, draft picks and veteran free agents, who were brought in to upgrade an ineffective offensive line and a porous defense.

In the bigger picture, the season will be about a lot more than that. As well it should be.