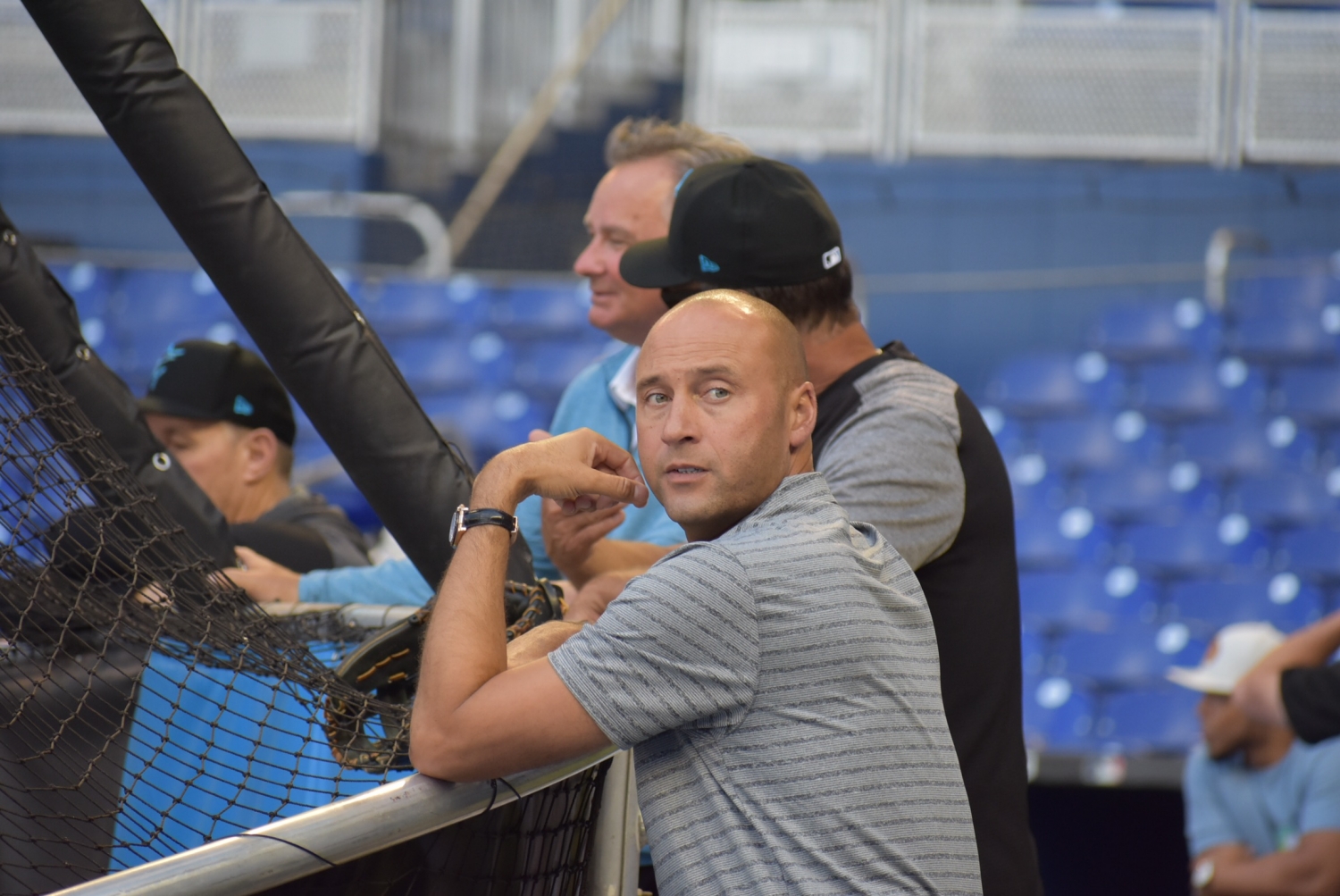 The ensuing weekend is like cramming for the final exam that is the MLB Draft. But from listening to the top people in charge with turning the Miami Marlins around, a lot of preparation was put into what is about to transpire on Monday.

“A lot of discussion, a lot of opinions,” Marlins CEO Derek Jeter said. “Our scouts have done a great job throughout the entire year keeping a close eye at all the guys at the top.”

The MLB Draft doesn’t get the same amount of buzz like the NFL and NBA Draft, mainly because none of the players selected start in the big leagues right away. There are a few exceptions like Mike Leake and Ryan Zimmerman. Even Brandon Finnegan pitched in both the World Series (Royals) and College World Series (TCU) in the same year.

The main purpose of the 40 round draft is to provide annual depth to the minor league farm system. Most of them will start in either the rookie level Pioneer or Appalachian League or the short season Single-A Northwest League or New York-Penn League, which start in mid-June.

“That’s your opportunity to infuse your organization with a lot of talent,” Jeter said. “So a lot of these decisions, we have to make sure we get them right.”

“We pick four, we pick 35 and 46, and our goal heading into the 2019 Draft is we want to get the most impactful pieces available to help our organization as we build towards championships,” Marlins president of baseball operations Mike Hill said. “I think the biggest thing we’ve seen in the top part of the Draft is there seems to be a lot more college bats available, and not as much college, right-handed pitching. You normally have a lot of college, right-handed pitching. It’s not as deep, from what we can see.”

MLB Pipeline has Oregon State junior catcher Adley Rutschman as the top draft prospect. California junior first baseman Andrew Vaughn is No. 3, Vanderbilt junior outfielder J.J. Bleday is No. 5 and Arizona State junior outfielder Hunter Bishop is No. 7. Jeter made the trip out to the west coast and to the SEC Tournament to personally see some of these guys in action.

Jeter wanted to make it clear to reporters that while he was scouting, he is not a scout and that he doesn’t underestimate what scouts bring to the table. So what was he looking for?

“What I like to get an opportunity to look at is interactions,” Jeter said, “players with their teammates, how hard they play, knowledge of the game. Obviously you can see tools. You can see what guys can hit, they can run, they can throw. But I only saw these guys play for one or two games. You see a lot of video but you really value the opinions of the ones you put in place.”

So basically he’s looking for the next Derek Jeter.

ICYMI @CraigMish asks Derek Jeter what he looks for in a player when scouting. @SwingsAndMishes pic.twitter.com/2Y6BJ1pBgi

When Jeter came to see Bleday, he had five hits during Vanderbilt’s 11-1 win over Auburn in the second round of the SEC Tournament. He’s a Golden Spikes Award finalist and also claimed the tournament MVP award after the Commodors won it on a walk-off against Ole Miss. He enters the postseason with a nation leading 26 hour runs and 67 RBI.

“I don’t think [Bleday] knew I was there,” Jeter said half-jokingly on Wednesday. “You’ve got to take into consideration the good or bad,” Jeter said. “You can’t put too much stock into one particular game. I saw guys who didn’t get five hits and you realized they were special players. That’s why you have to value the opinions of the scouts that have seen him for more than one game.”

Chief among those opinions is from DJ Svihlik, their director of amateur scouting.

“Of course, I get that question a lot, and it’s expected,” Svihlik said. “We’re familiar with all of these players, whether it’s a high school player, or it’s a college player. Obviously, because of my connection to Vanderbilt, it would make sense.”

Svihlik stated that the Marlins’ amateur staff has been tasked with relationship building with many of the players expected to go high in the first round.

“I would tell you that I trust our scouting department,” Svihlik said. “I trust myself. I trust our entire staff. We have deep relationships with a lot of these players that are at the top of the board, so the relationship in and of itself is important. But it exists with a lot of these different guys, so I wouldn’t single out one player, that it makes more sense with one than another.

“We know all these guys really, really well. That’s part of our process. That’s something we ask our scouts to do. We’ve got to get to know these players at a much deeper level than just batting practice.”

If the Marlins end up selecting a college hitter in the first round, it would be the first since drafting Colin Moran in 2013 out of North Carolina. Since then, they have selected prep phonemes. Two of the previous first round picks (Braxton Garrett and Trevor Rogers) prior to new management’s arrival are currently in Single-A Jupiter.

A prime example for picking the top college bat would be Mets first baseman Pete Alonso, who went from bring drafted out of Florida in the second round of the 2016 draft to being their best hitter in 2019 as a rookie. Andrew Benintendi of the Boston Red Sox is another example. He was taken in the first round out of Arkansas in 2015 and made his big league debut in 2016 and became a World Series champion in 2018.

Jeter, however, finds that to be more about the player than the place of origin. The top six draft prospects are split between three college and three high school standouts.

Gary Denbo on a key part of the “build” project: amass as much young starting pitching talent as possible. @CincoRazonesPod @SwingsAndMishes pic.twitter.com/tqVHhNCU9y

Nevertheless, you can expect the Marlins to draft some highly touted position players to fill an area that is clearly lacking. 15 of the Marlins top 30 prospects are hitters. As of now, only three of them are batting above .250. The first phase of the Marlins rebuild plan has already been initiated, which was to fill the farm with talented starting pitching and develop a pipeline similar to the Tampa Bay Rays.

With the top pitching prospects in place at each affiliate and no college pitcher worth reaching for at the top, the Marlins will likely collect polished bats in Day 1 of the draft and find more high school arms in Day 2-3. Jordan Holloway and Will Stewart were both taken in the 20th round out of high school and are now among the Marlins top pitching prospects, so there is gold to be struck in each phase.

“There’s a lot of great Major League players that weren’t taken in the first round,” Jeter said. “I know the focus is on who we’re going to take first but our guys are focused on every single round.”

While there may not be an instant verdict, but the draft is certainly a time for the Marlins to inspire hope for a brighter future, depending on who they pick in their first three selections.

After another series win, are Marlins back to square one?
Scroll to top