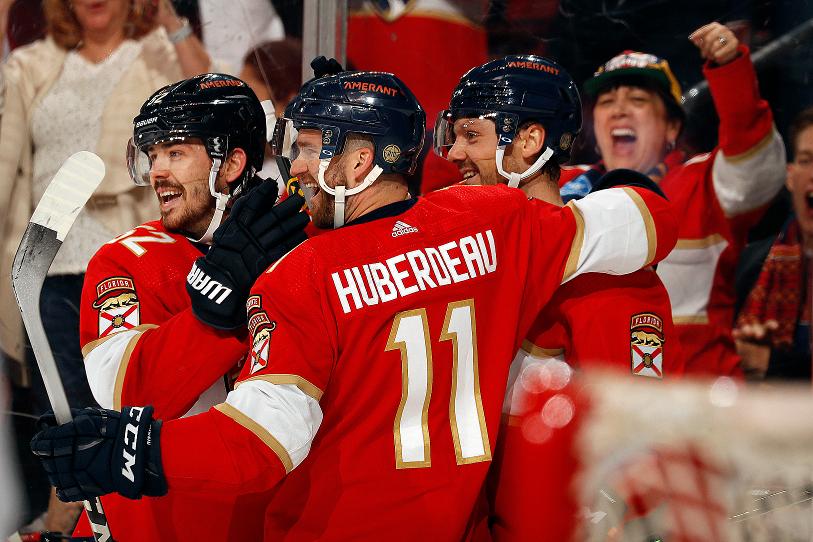 It always hurts when a favorite player on a team you’re emotionally invested in is traded away.

So it was a gut punch for Florida Panthers fans when news broke late Friday night that Jonathan Huberdeau and MacKenzie Weegar had been traded to the Calgary Flames.

Especially Huberdeau, the franchise scoring leader and a complete class act since Florida drafted him with the third overall pick in 2011.
But the outrage evident in knee-jerk social media is misplaced in light of the return — a 24-year-old coming off a 42-goal season (104 points) and newly signed to a long-term deal.

And, who is built for playoff hockey, and has shown it.

If unfamiliar with Matthew Tkachuk’s work, check out any number of highlight videos on YouTube. He’s a dynamic forward who will energize FLA Live Arena playing alongside Aleksander Barkov and another skilled wing such as Carter Verhaeghe or Sam Reinhart.

He’ll do so for the next eight years after agreeing to a $76 million contract. Notably, Barkov is also embarking on an eight-year deal this season.

A trade involving two players coming off 100-point seasons is a stunner. All the experts and many fans are quick to call this a win for Calgary. Yes, Panthers GM Bill Zito gave up a hell of a lot: Huberdeau and Weegar and a prospect with some potential (Cole Schwindt) and a future first-round pick.

But Huberdeau and Weegar will be playing on expiring contracts and can walk away after the upcoming season.

Weegar was definitely hitting free agency and would've priced himself out with the Panthers. However, Tkachuk is an upgrade over Huberdeau and is younger. I think Calgary wins the trade for now, but will be better for Florida long-term pic.twitter.com/bZd2e5JjTc

What strikes me is this was a Pat Riley sort of trade. Zito has shown since he got to South Florida in 2020 that he is not at all hesitant to make a bold move. He didn’t let being tight against the salary cap prevent him from swinging one of the biggest NHL trades in years.

Zito stuck his neck out on this one and it will be fascinating to see how it plays out.

Peel away the emotion and local sentiment about star players who have meant a lot to Panthers fans and this deal makes sense.

Notably, Tkachuk is just entering his prime while Huberdeau is 29 and will be playing though his next contract well into his 30s.

Trying to work out a long-term deal for Huberdeau, who can be an unrestricted free agent next summer, was supposed to be priority one for this Panthers offseason. Safe to assume that finding out what that would take to accomplish factored into the decision to trade him.

Weegar, a talented two-way defenseman, can also be a UFA after the upcoming season. It would have been unlikely to keep both players long term.

Zito has made it clear he is chasing the Stanley Cup in the short term. Getting to the second round for the first time since 1996 wasn’t enough to justify the status quo.

Being swept in the second round by the Tampa Bay Lightning likely was a consideration in making this trade. The Panthers’ high-scoring offense managed only three goals in four games, and also sputtered in the series win against the Washington Capitals.

Coming off a 115-point regular season, Huberdeau was mostly ineffective throughout the playoffs, registering one goal and four assists in 10 games.

Weegar’s untimely giveaway cost the Panthers Game 2 against the Lightning, and he also had a game-changing turnover in the Game 1 loss in the series against the Capitals.

Huberdeau is one of the top playmakers in the NHL, his anticipation uncanny, his passing often dazzling. He’s been a joy to watch for 10 seasons in Sunrise.

In Tkachuk, the Panthers gain a creative scorer whose more physical style is better suited to playoff hockey. In 12 playoff games with Calgary this past season he had 10 points (four goals).

Can’t wait to see how his offensive skills mesh with Barkov.

Also looking forward to what else Zito has up his sleeve this offseason. Now he has a big hole to fill on the blue line, which already needed improvement.

Zito spent a lot of draft capital on making a run in the recent playoffs and couldn’t prevent Claude Giroux, Mason Marchment and Ben Chiarot from departing in free agency.

Now he has made his riskiest gamble in dealing away one of the biggest stars in Panthers history. Emotionally it’s a blow to the fan base.

But when a franchise has been flailing in mediocrity for decades, it’s tough to make a case for staying the same course.

Ten years of hope under previous GM Dale Tallon didn’t produce a single playoff series win. They never advanced past the first round with Huberdeau in the lineup until this year.

That is not to detract from Huberdeau’s contributions and accomplishments. I covered him for a number of years and always admired him as a player and a person. I recall how he and Barkov immediately thrived when Jaromir Jagr arrived and joined them on the top line, and how entertaining it was to watch the trio circulate the puck around the offensive zone — Huberdeau had 12 points in his first 13 games with Jagr.

Craig Davis has covered South Florida sports and teams, including the Panthers,  for four decades. Follow him on Twitter @CraigDavisRuns

Mateo’s Hoops Diary: Deandre Ayton is Worth Betting On

What Matthew Tkachuk brings to the Florida Panthers
Scroll to top