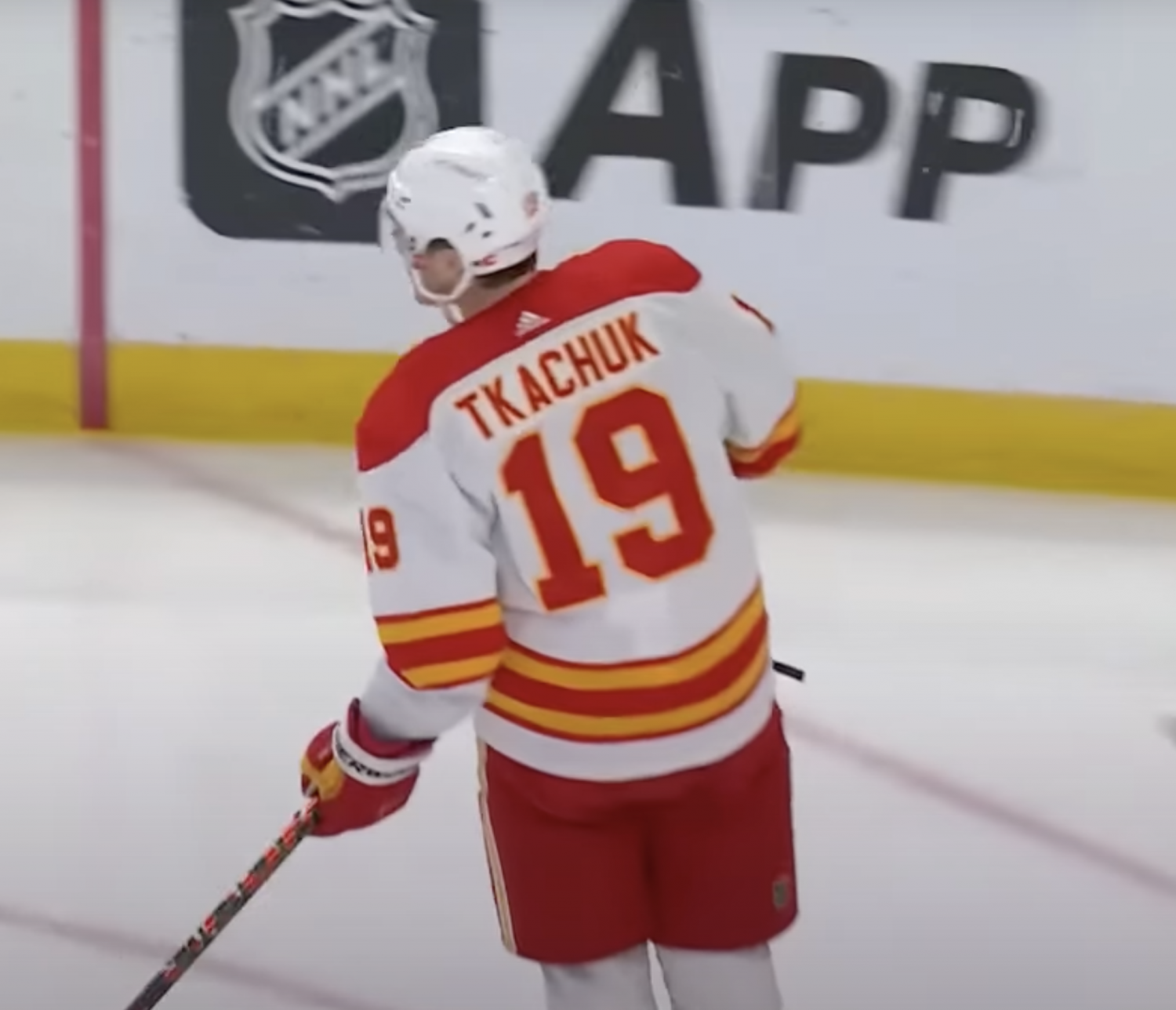 The hockey world was taken aback Friday night as the Florida Panthers and Calgary Flames swapped 100-point superstars in a blockbuster trade.

Earlier in the week, reports said that Tkachuk told Calgary he wasn’t going to re-sign as an RFA; Florida was one of the few desired teams on his trade list, he told ESPN’s Linda Cohn.

Tkachuk’s contract extension in Florida is eight-years, $76-million, with a base salary of $1-million per-season, $68-million in signing bonuses.

Obviously this trade has the fan base at odds. Many are disappointed that Huberdeau, one of the most beloved players in Panthers’ history is on his way out after 10 seasons in Florida, along with MacKenzie Weegar. The other side of the fan base is excited to see what a young star in Tkachuk can bring to a team that has had limited playoff success over the last 25 years.

In this article I am going to focus on the type of player Tkachuk is and how he can help the Panthers this season and beyond.

Who is Matthew Tkachuk?

Tkachuk plays a unique brand of hockey that isn’t seen often in today’s NHL. He’s a 6-foot-2, 200-pound, power forward that can go toe-to-toe physically with anyone in the league, while still scoring at above a point-per-game rate. If I could describe him in non-hockey terms, I’d say he’s like a Swiss Army Knife. He can score, hit, fight, pass, dangle – he can do whatever you need him to do and that’s why the Panthers gave up so much for him.

When you watch Tkachuk play, immediately you’ll notice his presence in the offensive zone.

Without the puck, he continuously works his way into areas where his teammates can feed him.

He aggressively fights for loose pucks in the corners and will use his big frame to his advantage in 50-50 puck battles. In front of the net, he finds ways to get the puck on goal, even if it is from the most absurd angles. Tkachuk is extremely composed and may flash his silky hands with a behind the legs goal or a mid-air deflection, as he did multiple times in Calgary.

As you watch more of his game, you’ll see how frequently he carries the puck in transition. With his long stride, quick release and playmaking ability, he can score off the rush or find an open teammate in a prime scoring area.

Obviously one of the biggest parts of Tkachuk’s game as a power forward is his physical play. There’s not a ton of players in the league who can lay the body as well as he does; getting under the skin of the opposition while still being top-10 in points (he ranked eighth in 2021-2022). A comparable player would be Brad Marchand. While Marchand isn’t as big as Tkachuk, listing at just 5-foot-9, both players can hit, score and irritate opponents.

We know what Tkachuk is capable of on the ice, but how will this help a Panthers team that is one of the top contenders in the league?

First off, he is only 24. When we look at the age of the Panthers’ core, every player except for goaltender Sergei Bobrovsky is 26-years-old or younger, and the Panthers’ have a stud 21-year-old backup goalie in Spencer Knight. Jonathan Huberdeau and MacKenzie Weegar both would have been 29 by the time the playoffs started this upcoming season, and would have been 30-years-old the first-year after their current contracts expire. Florida got younger with this move and it extends their cup contention window.

Why make this trade?

Getting Tkachuk who is in the prime of his career extends the competitive window the Panthers will have with their core for multiple years. As the second highest paid skater on the roster, just behind captain Aleksander Barkov, Tkachuk will be playing at his highest level alongside most of the current Panthers’ players for multiple seasons.

Obviously Jonathan Huberdeau is coming off the best single-season by a left-winger in NHL history with his 115 point 2021-2022 campaign, but how long can Huberdeau continuously play at this elite-level? That was definitely one of the questions the Panthers pondered as they made the decision to not offer him an extension and package the star to Calgary for a much younger player.

With one-year remaining on his current contract with an average annual value of $5.9 million, the 29-year-old is due for a massive payday, most likely getting a similar dollar amount to that of which Tkachuk signed for on his extension. Florida decided that a long-term extension with Huberdeau wasn’t part of their future plans, and it makes sense as a hypothetical eight-year extension upwards of $9-million per season would have made Huberdeau one of the three highest paid players on the team throughout his 30’s (barring any higher contracts in the future).

So let’s say Huberdeau signed the eight-year, $76-million extension in Florida instead of Tkachuk, that’s still the same term and cap hit no matter the ages of the two players. What about the other pending unrestricted free agent that was involved in the trade, MacKenzie Weegar?

Weegar, who is just a few months younger than Huberdeau was also due for a new contract and his next deal would have demanded way more than his current $3.25 million AAV. If we look at active defenseman contracts in today’s NHL, the 25 highest-paid defenseman all have a AAV of at least $7 million. It is safe to say after Weegar’s 2020-2021 season which saw him finish top-8 in Norris Trophy voting, he could see potential offers of around $6 million plus on his next contract. With these scenarios, Florida would have tied up around (at least) $16 million on those two while still having three more years on Sergei Bobrovksy’s $10 million AAV deal. That would have seen three players in their 30’s making upwards of $26 million for multiple years, not including another $10 million for Barkov’s contract.

With this trade, Florida will have some flexibility for next offseason’s free agency, a luxury they didn’t have this year for a variety of reasons, mostly due to the $6.575 million of dead cap from buyout penalties. In 2023-2024, Florida would only have $1.24 million of dead cap and have $7.8 million come off the books from Patric Horqnvist and Radko Gudas’ contracts. The Panther’s will have a substantial amount of money to spend next offseason compared to the budget they had this year.

So Florida gets a young player who slots in the timeline of their current core and they’ll have more space to bring in players over the next few seasons.

What about this year?

Thinking of the future is always smart, no matter how good your team is, but the Panther’s just won the President’s Trophy the previous season before getting swept in the second-round of the playoffs by the Tampa Bay Lightning. The team can contend now, the question is does Tkachuk take them to the next level?

Offense wise, Tkachuk’s even strength points per 60 last season was 3.7, while Huberdeau was at 3.9. Tkachuk had a better overall on-ice goals for and corsi for per 60 than Huberdeau last season while also having a better on-ice goals against per 60 metric. Tkachuk’s 5-on-5 and even strength advanced stats in most major categories are also statistically better than Huberdeau’s during the 2021-2022 season. These advanced stats show Florida is getting a statistically better all-around player in Tkachuk.

If you watched Panthers games last year, most of the season saw Barkov and Huberdeau playing on separate lines to balance out the top-six, creating two top lines. With Tkachuk replacing Huberdeau on the wing, does he play with his former Flames teammate Sam Bennett? Maybe he gets paired alongside last year’s rookie phenom Anton Lundell, or you put him with the captain Aleksander Barkov.

Florida’s newest head coach Paul Maurice will have to see which line combinations work best for the team. It would make a lot of sense to see how Tkachuk and Barkov fare together on the top line. With Tkachuk’s tenacity in front of the net and his aggressive style of play, he’s going to open up the ice for the playmaking machine that Barkov is. Tkachuk and Barkov would be a matchup nightmare as the duo are both talented goal scorers and playmakers. Pair that with Barkov’s defensive abilities and Tkachuk’s hard-hitting play, this could be a scary top line.

Last postseason for the Panthers was an extremely disappointing one to say the least. GM Bill Zito went all in at the trade deadline, depleting major assets to acquire Claude Giroux and Ben Chiarot. After winning their first playoff series since 1996, Florida was dominated by Tampa in their four game series which saw the Panthers get swept. Over the 10 playoff games, Florida’s two star forwards Barkov and Huberdeau combined for 3 goals and 12 points.

On the other end of the continent, Tkachuk and the Flames also found themselves on the wrong end of a second-round matchup with their in-province rivals, losing in five games to the Edmonton Oilers. In 12 playoff games last season, Tkachuk had 4 goals and 10 points. In 27 career playoff games, he has 15 points.

With only one playoff-series win to show for over the last 25 years in Florida, the front office wanted a new look, hoping Tkachuk will produce in the playoffs, taking Florida to the next level.