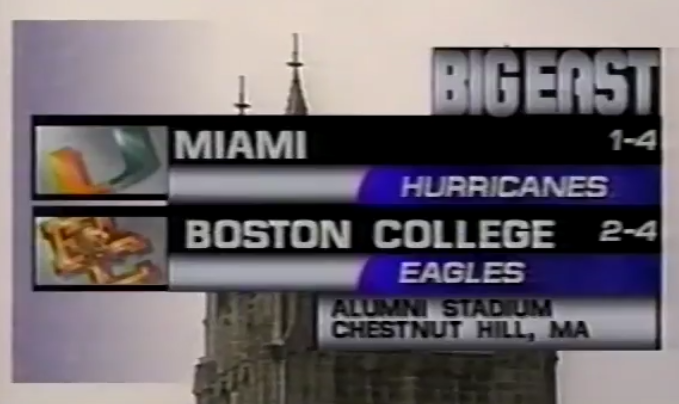 This is part of a series on Canes football games that have been lost to history. Information on the series including other articles is available here.

The year is 1997. President Bill Clinton was in the first year of his second term. The week of October 18th, 1997 saw Elton John’s Candle in The Wind top the Billboard charts for the second week in a row. And Flood Tide by Clive Cussler was #1 on the New York Times fiction best seller list. Gas was $1.23 a gallon. The big news story was Bill Clinton using the line-item veto on a military spending bill. A year later, line-item vetos were declared unconstitutional.

Miami entered the game at 1-4, on a 4-game losing streak. The previous week, the Canes had been destroyed by Florida State, 47-0.

Boston College was also struggling, and entered the game at 2-4.

Combined, both teams had lost 7 in a row. This was only the 2nd year that college football allowed for overtime, and it would be needed.

The Canes were struggling under the weight of probation and were seriously threatened with finishing the year with a losing record.

Boston College was not in any better shape.

The Canes came out inspired, motivated to wipe out memories of being dominated by Florida State.  Immediately, Edgerrin James housed a 69-yard TD and the Canes were up 7-0.

The Canes weren’t done yet, as Reggie Wayne made a diving TD on a pass from Ryan Clement to make it 14-0. Shockingly, in the 6th game of the season, that was the first TD that a Canes’ WR had caught all year.

Both teams were unable to stop the run and each team ended up with well over 300 yards rushing. James set a school and conference record with 271 yards, while Boston College had 2 runners go for big yardage, with Omari Walker going from 185 yards and Mike Cloud adding 157 yards.

James notched his 3rd TD of the game late in the 3rd quarter, and with the Canes up 31-17, the game felt over.

BC responded on the back of Cloud, who ripped off several big runs, including a 37-yard TD to cut the lead to 7.

More troubling for the Canes was that James hurt his shoulder and had to leave the game. Without James, the Canes tried to ice the clock. With 3:37 left in the game, on 3rd and 7 near midfield, the Canes were a conversion away from pretty much putting the game away. Instead, Clement had a miscommunication with Bubba Franks and BC collected an easy interception, which was returned to the Miami 33. Walker punched the ball in to tie the game and send it to overtime, which was the first time that either program had played in overtime.

BC won the toss in OT and the Canes had the first position, they scored easily with Trent Jones getting into the end zone. The Eagles answered with their own TD, again with little resistance.

In the 2nd OT, on the first play, Walker went 25 yards to put the Eagles up 44-38. This is when Tom O’Brien made the curious decision to go for 2. The Canes defense stiffened and forced an incompletion.

Miami didn’t make it easy. Needing a TD to tie (and XP to win), the Canes immediately moved inside the 15 yard line. But that’s when things seemed to derail. Clement took an awful sack, losing yardage back to the 22-yard line. But Clement would make up for it. On 3rd and 17, he threw this strike to Darryl Jones who made a diving catch in the end zone. Andy Crosland nailed the XP after an interminable wait involving multiple timeouts, and the Canes won 45-44.

Why is it Memorable?

This was the first OT in school history. It was also a huge learning experience for a young Canes’ team that would eventually bring the program to the top of college football.

It’s also really interesting to see so many of the young, great Canes’ players before they were great. Santana Moss wore #48 in this game, and was behind Darryl Jones on the depth chart. You could see the talent in Bubba Franks and Dan Morgan. The team was young, but flashed ability.

And then there was Edgerrin James. 32 carries 276 yards, 3 TDs. James would break that yardage record a year later against UCLA, but what a performance.

For a program reeling on a losing streak, and for a young team that had been kicked multiple times, this win was crucial.

There is also a huge BC angle, and the newness of OT in college football might have played a role in this game. It is quite possible that BC Head Coach Tom O’Brien was unaware that he could kick an extra point in the 2nd OT. After the game, he said the official, while neglecting to name which one, told him that BC had to go for 2, but that he knew that wasn’t the rule, but went for 2 anyway. It was a confusing explanation that didn’t really make sense. That decision helped the Hurricanes to a character-building victory.

Both teams would miss a bowl game, but Miami actually played decently down the stretch of the season. After starting 1-4, they finished the year 4-2, with this game being a turning point. While this Canes team finished 5-6, they were clearly better than some of the recent 6-6 Canes teams, but in the early 90s, you had one less “free” win (“free” is in quotes because let he does not lose to FIU cast the first stone).

For Boston College, they would finish the year 4-7, but they were also starting to build something.

Probably one of the more interesting things is to look how things worked out for the respective coaching staffs.

Meanwhile, Tom O’Brien built Boston College into a consistent winner. By 1999, BC started to consistently make bowl games. And win those games. Between 2000-2005, Boston College would win 6 consecutive bowl games. O’Brien would leave BC for NC State after the regular season with 7 consecutive winning seasons and only one of those seasons with less than 8 wins. His offensive coordinator in this game, Jeff Jagodzinski, would return to BC to take over for O’Brien after spending several years in the NFL. He was unceremoniously fired in retribution for interviewing for an NFL head coaching job.

So, despite both teams struggling in 1997, and this game being a matchup between 2 teams that failed to make bowl games, both programs were on the ascendancy and would player bigger, more meaningful games in years to come.

Have memories of this game? Tweet us at @vrp2003 and @5ReasonsSports