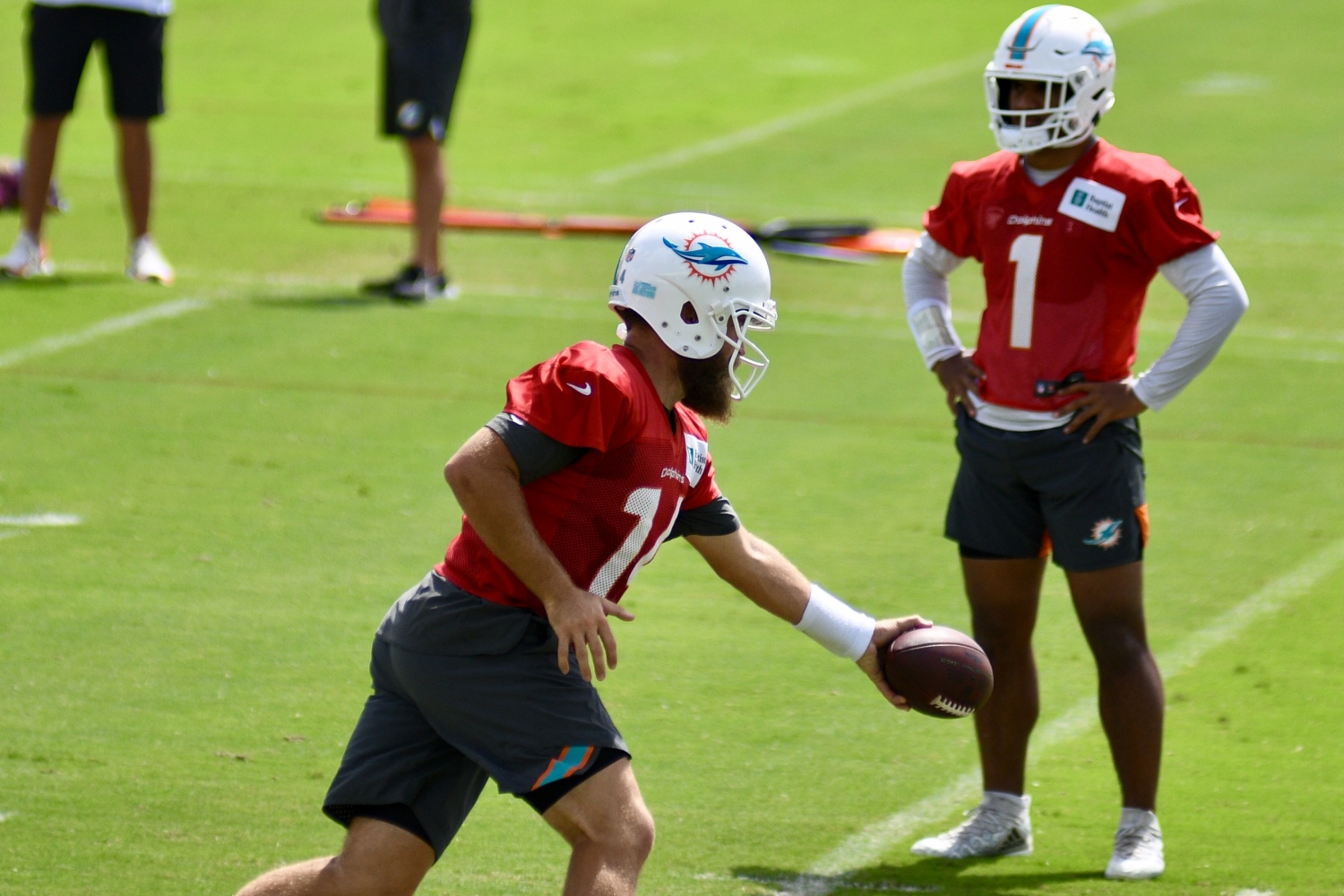 Dolphins name Ryan Fitzpatrick the team’s starting QB vs. San Francisco. But how much longer must fans wait before it’s Tua Tagovailoa Time?

Ryan Fitzpatrick’s play is better than a year ago, but the team expects more out of the grizzled veteran.

Through the first quarter of the 2020 NFL season, the Miami Dolphins currently sit with a mediocre 1-3 record.

Some might find the good in losing by 10 points to New England, 3 to Buffalo, and 8 points to Seattle. Yes, the team is probably better than its record leads us to believe. But at the end of the day, your record is everything. The Dolphins realize their hopes of being a playoff contender are slowly slipping away. We can definitely talk about the different issues with the secondary and pass-rush, and I’ll do that another day.

If you’re someone that likes to look at numbers, Fitzpatrick’s stats in 2020 are as follows:

Those numbers are not good. But when you compare them to his stat line through four games last year, where he was benched for Josh Rosen off and on, we can all say; statistically, he’s playing much better. We also need to take into account the whacky offseason these players have had to deal with. But for a guy that knows the offense as well as anyone, he needs to play better. And Ryan Fitzpatrick would be the first person to admit that.

ryan fitzpatrick: "for me, i feel terrible. i felt like there were a lot of guys on this team that played well enough to win and i wasn't one of them."

Whether or not he has the same velocity he once had and can make the same throws as The Left Arm of God is a discussion that needs to be had sooner rather than later. But I don’t think anyone believed heading into Sunday’s game vs. San Francisco; Brian Flores would make a change at quarterback.

Although, for a second, it did seem like it was possible.

Brian Flores is asked about the Miami Dolphins Quarterback situation after Monday’s loss to Seattle.

The very first question the Miami Dolphins head coach was asked at his Monday press-conference was simple. ‘Who’s going to be your quarterback on Sunday?’

“We’re still going through corrections of the game from yesterday. As a staff, we normally start talking about this this evening. ‘Fitz’ (Ryan Fitzpatrick) – I thought we moved the ball pretty efficiently yesterday. Look, I understand where everybody’s coming from with Tua (Tagovailoa). I get all that. At the same time, he’s a young player, he’s coming off the injury. So we’ll make the decision on the starter, but I would presume it’s going to be Fitzpatrick.”

Flores was later asked why he paused when asked the vital question about the team’s looming quarterback controversy.

Brian Flores does not commit to Ryan Fitzpatrick as the Dolphins' Week 5 starter yet. Said it will be discussed during meetings tonight.

The pause was – we haven’t even gone through the corrections from the game. We’re actually in the middle of that right now, so it wasn’t based off of anything in the game. I hope you guys don’t take that the wrong way; but every week we come in on Monday evening after we make all the corrections. We’re a quarter of the way through the season now, so we’re going to obviously do an evaluation of our team from that standpoint. We try to play the guys we feel are going to help us turn this thing around and play better in situations that like red zone and two-minute and the fourth quarter; and that’ll be at all positions. So that was kind of a conversation we just had as a staff, so I guess that’s what gave me some pause. Not something from the game. We just talked about reevaluating everything – every position, every grouping and we always do that after every quarter, let’s say, and try to, moving forward, do the things that we’ve been doing well and try to continue to build on those and obviously improve anything where we haven’t had as much success.”

And then at 8:56 AM, before I even got to take a sip of my morning coffee, the Miami Dolphins official Twitter account answered the burning question.

Ryan Fitzpatrick will be the starter for Week 5 against the 49ers. pic.twitter.com/DxbiFbwxgD

This news isn’t really a surprise to anyone.

I mean, look around. Things aren’t exactly normal. No one knows what’s going to happen over the next month. And at 1-3, Ryan Fitzpatrick shoulders the blame for 2/3 losses. But he also had a lot to do with Miami’s lone win of the season. We always knew it was a story of Dr. Jekyll and Mr.Hyde with Fitzpatrick. One week he’s making unbelievable throws, like a magician. The next week he’s throwing two picks as the offense snails along to five field goals.

In Flores’ eyes, Ryan Fitzpatrick earned another chance to prove he gives the Dolphins the best chance to win. But for how much longer?

Before I go on my soapbox about Tua Tagovailoa, we need to address how wreckless Fitzpatrick has been when running the football. We all realize when Tua is eventually the starting QB, his success depends on his ability to stay healthy and elude hits. So, WTF is Fitzpatrick teaching Tua? You’re paying Jordan Howard a nice chunk of money to be your short-yardage back, let him take a beating.

Tua Time is right around the corner.

Some fans and analysts might be upset with Flores’s decision to keep Ryan Fitzpatrick, and that’s okay. I do think Tua gives this team the best chance to win. But once you hand the keys over to Tagovailoa, there’s no turning back. Fitzpatrick has put his ass on the line every opportunity he’s got in Miami and appears to be the perfect teacher for Tua. Maybe he does deserve another chance against a San Francisco team with injuries throughout the roster.

But what if Fitzpatrick starts the game with two costly mistakes? What if the team has no choice but to make a change at halftime. They sure AF are not going to call upon Jake Rudock, right. That would mean Tagovailoa isn’t healthy and according to Brian Flores himself, Tagovailoa has checked all the boxes from a medical standpoint.

No. He’s checked all the boxes from a medical standpoint. He has. Look, the honest thing from me is if he was my kid and he had a serious injury like that, I wouldn’t want his coach to be in a rush to throw him in there because of media pressure or anything like that. That’s kind of how I approach this situation and really all situations, the players. Essentially they are my kids. No one is going to pressure me into doing anything. When we feel like he’s ready to go, we’ll put him in.”

I know we’re all excited because we see what Joe Burrow and Justin Herbert are doing with their new NFL teams. And we are eager to see what Tua Tagovailoa can do not only for this offense but for this team. The entire franchise is relying on Tagovailoa to be the star quarterback he was at Alabama. The fanbase, everyone has waited 20 years for the Dolphins to have a QB with this type of talent; this type of ability to move around in the pocket. His pinpoint accuracy.

Tagovailoa has the potential to be the next great quarterback for a team that has had nothing but hope since #13 rode off into the sunset.

Check out this week’s episode of Yard Work with Alfredo Arteaga:

Five Reasons the Hurricanes can Shock Clemson
Scroll to top