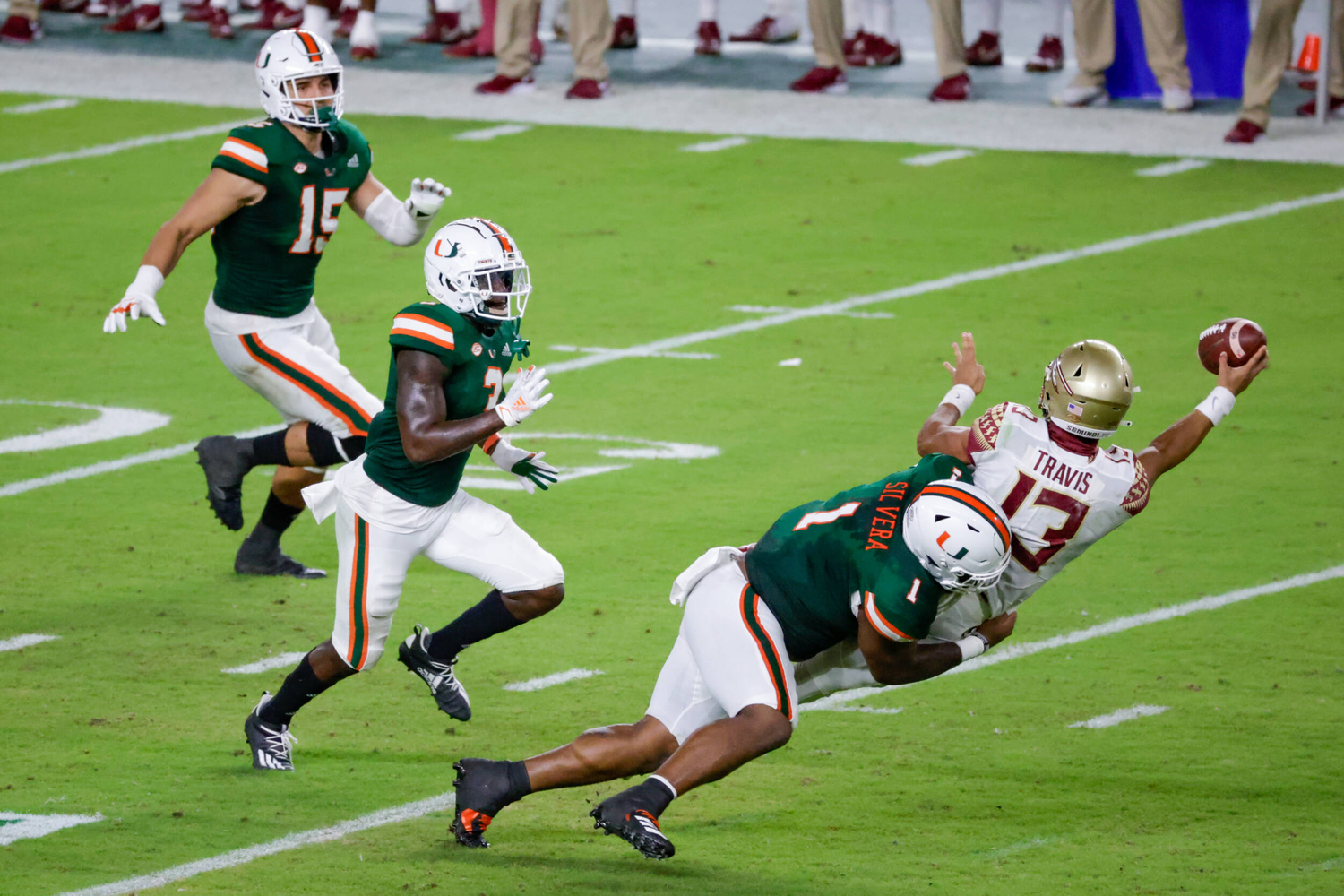 The Miami Hurricanes prepare for their biggest regular season test in years when they travel to face No. 1 Clemson.

Momentum is such a subjective thing to interpret.

Does it carry over, or slowly fade as the days become weeks in between competition?

After a thorough dismantling of Florida State 52-10 nearly two weeks ago, the Hurricanes must regain it in a hurry.

Clemson sits at the summit, where Miami has been before and could (perhaps) be on the precipice of reaching again.

We have sat here, waiting for The U to be “back”.

The quarterback question seems to be answered, and slowly the Hurricanes have built a team with both elite skill and improving depth.

What does it mean against a Clemson team that is the new standard.

Can the Hurricanes compete?

Clemson has separated themselves not only from the ACC pack, but most of college football as well.

There are very few weaknesses on the Tigers roster.

They probably have the two best players overall in Trevor Lawrence and Travis Etienne.

So how can Miami not only punch above their perceived weight, but land a knockout?

Here are five reasons for Hurricanes fans to have hope Saturday.

King and the offense limit mistakes

In order for the Hurricanes to pull off the upset they will need to play a near perfect game.

Virginia hung with Clemson despite two early turnovers and it was a 27-17 game in the third quarter.

Miami has a far superior team and D’Eriq King so far has taken care of the football.

Lashlee on King: “He’s just a consistent young man. The team knows every day they are getting his best”.

The Hurricanes will need even more out of the running game as Clemson allows just 90 yards per game on 2.3 YPC.

For Miami to have a chance they will have to try and control the clock in order to keep Lawrence and the offense on the sidelines.

King must stay calm under pressure and take what the defense gives him, if he does so then…

Big plays could be there

If Clemson does have one area of concern it may be giving up big plays on defense.

They don’t give up a lot in terms of yards-per-game, but have allowed 13.89 yards-per-completion so far which ranks near the bottom of college football.

Miami has plenty of weapons and Clemson will have to guard sideline to sideline against the speed of the Hurricanes.

Look for Will Mallory and Brevin Jordan to be involved early, especially if King sees pressure from the Clemson front seven.

Clemson defensive coordinator Brent Venables is as aggressive as they come, Miami will have opportunities on the outside against single coverage.

Lashlee on Clemson DC Venables: “He calls the game like an offensive coordinator, aggressive”.

Miami can actually run the football

So far Clemson has faced Wake Forest and Virginia in ACC play, two of the worst rushing offenses in the country.

Not surprisingly the Tigers held both in check, especially Wake Forest who managed just 37 yards in their matchup.

Miami offensive coordinator Rhett Lashlee has leaned on the ground game when necessary and may do so again.

The Hurricanes rank 12th in the nation with over 232 yards rushing per game, and 6th with a 5.86 YPC average.

Clemson has not seen a running game anywhere near what Miami brings, and the Hurricanes have three backs that can lead the effort.

The Miami offensive line is much improved and will need to bring it for 60 minutes against a tremendously deep Clemson defensive front.

If the up-tempo Hurricanes’ offense can keep Clemson from rotating in certain situations, perhaps they could wear them down some as the game progresses.

As long as the game is close in the second half, there is no reason to abandon the run game.

One thing all quarterbacks hate is pressure, especially from the middle to collapse the pocket.

What may be nearly as difficult to contain is his ability to scramble and throw outside the pocket.

Miami has the athletes on the defensive side to set the edge but must remain disciplined at all times.

Lawrence has been sacked five times in two ACC games and was able to move the ball with his running ability against Virginia.

The Miami pass rush must be a factor and defensive coordinator Blake Baker will need to be aggressive like his counterpart Venables.

Clemson has not faced a defensive line that can do this:

One or two appearances by the Turnover Chain are a must for Miami to keep the game within reach.

Lawrence has yet to throw an interception this season, Miami has to force him to rush his decisions and make him feel the heat.

Hurricanes have nothing to lose

Miami enters the game as a double-digit underdog and if they can play a competitive game with Clemson it will not tarnish their standing much.

Manny Diaz has shown early in the season that he can have the team prepared and energized for big games. Rhett Lashlee has unleashed a high powered offense that balances the scales and the Miami special teams unit is much improved.

The Hurricanes are not expected to win by many and the pressure of victory is squarely on the Clemson side. Both Lashlee and Baker need to put the players in position to succeed and the team has to remain focused. Penalties have been an issue in their last two games that Miami was able to overcome, they cannot afford many mistakes Saturday.

We will have a preview show for Miami and Clemson Thursday night at 7:30PM EST.