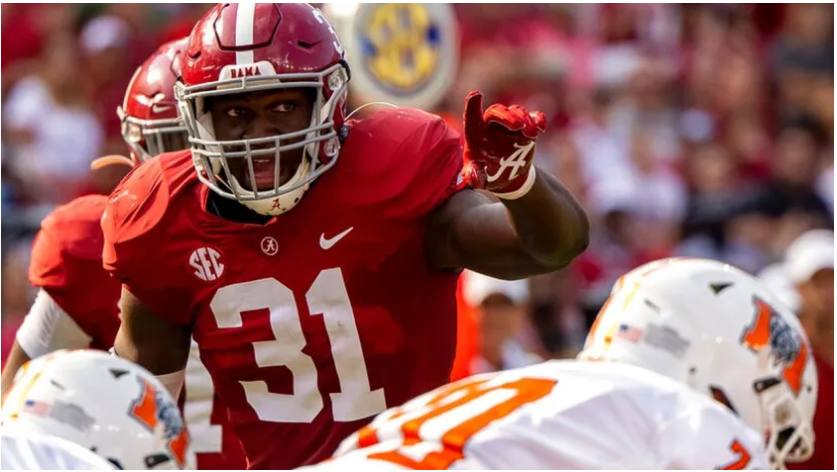 I’m sorry Texans’ fans, no QB here. You guys are getting Will Anderson, a once-in-a-generation player. Just for reference, Will Anderson was called “the next guy” by Nick Saban his first day on campus.

Will Anderson is my top prospect in the 2023 draft, and I know it’s early, but I’d be shocked if that changes.

The Alabama EDGE makes the game of football look easy. Some of the best first-step quickness I’ve ever seen. pic.twitter.com/tKMMRNlCbU

Anderson’s unique athletic ability combined with his incredible pass rush IQ let him lead the SEC in sacks — as a true freshman during the Covid year against only SEC competition.

Next, The Lions go for the “Burrow-to-Chase” type connection. The 2022 Heisman gets reunited with his favorite target, who just happens to be this year’s pick for the Lions. Jameson Williams and Young get to be back together in the NFL. Yes, C.J. Stroud could be the better pick this year. However, Young just makes too much sense.

In my opinion, as of right now Jaxon Smith-Njigba is better coming out than his other two Ohio State counterparts. Now, this is a “Way too early 2023 NFL Mock Draft” so everything could change, but JSN had top ten tape as a sophomore. So just take that as you will.

Yeah, the Daniel Jones project failed. Joe Schoen gets his guy to build with in C.J Stroud. Stroud and Young will be battling for QB1 all year long. With the concerns over Young’s height, Stroud could very well be QB1. However in this world, the Giants get lucky and get Stroud at 4.

The Panthers let Matt Corral have the keys late in the year after Darnold struggles, and he played them right out of the top 3. So, they go with the 6’3″ EDGE from LSU B.J. Ojulari. Ojulari will test really well come NFL Combine time, which will land him in this top 5 slot.

I see the Falcons playing their way out of a QB. Unless they go Spencer Rattler, Phil Jurkovec or Hendon Hooker, which I don’t see at six as of right now — especially after drafting Ridder.

Bryan Bresee is a monster. He is 6’5″ 300 lbs and has a very deep bag of tricks to use when pass rushing. Bresee is a bonafide NFL starter.

Oh, would you look at that, UGA has another stud defensive lineman. In all seriousness, Jalen Carter is better than Jordan Davis in my opinion. He is quicker off the line and a better pass rusher than Davis. Carter is going to prove his worth this season, being the leading man in UGA’s new defensive line.

A lot of people aren’t going to like this one. Spencer Rattler comes all the way back from the depth of despair and makes himself the blue chip guy he was before last season. Spencer has all the weapons in the world at South Carolina: Josh Vann, Corey Rucker, Antwane Wells and that’s not including a killer TE room. Look out for Rattler this year.

This offensive line class feels very weak compared to Evan Neal, Charles Cross and Ikem Ekwonu. Nonetheless, Paris Johnson is still really good. He isn’t any of those three guys in my opinion, but he is a great option for the Bears because well, protect Fields PLEASE.

I had a really hard time with this one. Mostly because I couldn’t pick between Eli Ricks and Kelee Ringo. As Mitch Wolfe said

Well these two are all three of these things. I went Ringo. The crazy athletic UGA corner might actually get some targets this year, since quarterbacks might actually have time to throw the ball this year.

I’m going to be 100% honest, I feel bad mocking Brandon Joseph here with how teams valued Kyle Hamilton. However, I don’t think Joseph will test the way Hamilton did, which could catapult him up to 11. The Northwestern transfer is going to be vital to Notre Dame’s defense this year.

It’s shades of 2019 in Clemson with two defensive lineman in the first round. Myles Murphy is just another one of those guys who on tape was a first rounder last year. Coming back? Oh yeah, that definitely should move him up into this range.

A FIRST ROUND RUNNING BACK?!? Well, Josh Jacobs probably won’t be in Vegas after this year, as the Raiders turned down his 5th-year option.

So, replace him with a guy who can do it all. Watch Bijan Robinson and find me a legitimate hole in his game.

After leaving LSU for Alabama, there is a big year coming for the physical corner. Ricks is a guy who I firmly believe in. He may end up as CB1 by the time the draft rolls around. The reason Ricks isn’t CB1 in this mock just because of the fit with the Steelers and Ringo.

Nolan Smith could be the best player on UGA’s defense, but he falls here to 15 due to some off-the-field problems. Smith was driving with a suspended license and he got caught speeding. Other than that? Smith is going to be a star for UGA and will make an NFL team very happy one day.

Jahmyr Gibbs joins the likes of Derrick Henry and Najee Harris as a stud running back from Alabama who is going to make a huge difference in the NFL.

Jahmyr Gibbs will be the next great Alabama RB in the Nick Saban Era 🐘🔥 pic.twitter.com/9Kxt6fRR4c

He, much like Robinson who went three picks prior, is a complete back. Runs with power, speed, and has great hands.

You want honesty? I took Michael Mayer here because it FEELS like a Bill Belichick pick. Mayer is good, don’t get me wrong, but he shouldn’t go this high. He is a good blocker and a good pass catcher, however he isn’t a unicorn like Pitts so I don’t see him going this high unless someone takes a big shot on him.

The Cardinals used their first rounder this year on Hollywood Brown. So in 2023, look for them to add to an aging defense. Trenton Simpson is a perfect fit next to Isaiah Simmons. Simpson is aggressive, but has a great football IQ and good enough vision to be able to make sure he doesn’t over commit.

Imagine losing AJ Brown, replacing him with Treylon Burks, then adding a guy who was crowned as the next great LSU WR as a true freshman. Kayshon Boutte is that guy.

The run on wide receivers begins. Kenny Pickett and now maybe Caleb Williams? The number 1 target for those guys gets shipped out to Indy.

Jordan Addison is that dude. Look at that catch away from his frame over the middle. pic.twitter.com/UBaAhjZ9Ok

Addison entered the transfer portal after spring ball and is likely headed to SoCal. Addison has great hands and uses his body really well in the air.

I think Marvin Mims will have a down year after losing his coach and two quarterbacks, but the talent is 100% there for the 5′ 11″, 177 lbs Oklahoma wide receiver. Mims is fast, a good route runner , and has great hands. Mims will be a good fit for Mills — if he is, in fact, the guy in Houston.

It feels like the Ravens never stop picking up good defenders. So, I’m just going to put Noah Sewell here. Paired up with Patrick Queen, the Ravens somehow get even scarier. Sewell and his teammate Justin Flowe could easily shoot up draft boards.

The other “B. Young” from Alabama is Byron, and he is going to make waves for the Tide this year. Now, Young waited behind Christian Barmore and Phidarian Mathis, he is the next up in a long line of Alabama defensive lineman to become a difference maker. Young is strong, and it mostly comes from his explosiveness.

With Chris Harris getting older and already having J.C. Jackson and Asante Samuel Jr, replace the pricey Harris with Joey Porter Jr.

Now you have the best young core of defensive backs in the game. Porter is very fluid in his movements and always does a good job with his hands.

Henry To’oto’o was a monster at Tennessee, had a very good year at Alabama, and chose to come back after losing the National Championship. Henry T’s biggest issue is over-commitment. He can be too aggressive and can get caught in the wrong hole, which is his downfall.

I am expecting a huge year from Boston College’s Christian Mahogany. He has to fix his feet just a bit, however, I am a firm believer in his hands and size combo. If your team needs a late first O-line this is the guy.

After two weak interior defensive line classes, Isaiah Foskey is the fifth (and not final) IDL to come off the board.

Thoughts on how Isaiah Foskey could go from really good to elite in 2022. pic.twitter.com/mn6TSUplTY

Foskey is an anchor for Notre Dame and is going to work his way into the first round come next April. The big man clogs up gaps quickly with an explosive first step.

An ABSOLUTE BEAST, Zion Tupuola-Fetui is an physical specimen. However, everyone has doubts with PAC12 pass rushers, and with little production someone will have to bet on talent. I think putting Aidan Hutchinson with Tupuola-Fetui in this 2023 NFL Mock Draft would allow Tupuola-Fetui to grow into his role.

I would love to put Garrett Williams next to Jaire Alexander for the Packers. It is a match made in heaven, honestly. Williams is another guy who hasn’t produced much, mostly because people don’t throw at him.

The final interior defensive lineman goes. Justin Eboigbe is another guy who you have to bet on upside with. He won’t produce much with Young, Anderson, Dallas Turner, and more on that Bama D-line . The Chiefs are in a good enough spot where they can bet on traits.

Okay, let’s get serious, if Phil Jurkovec doesn’t get hurt he is probably QB1 in this past year’s draft class. He gets the short end of the stick by having to wait a year, where he is now QB4.

I'm going to be keeping an eye on Phil Jurkovec at Boston College this CFB season. pic.twitter.com/k5MeAYUx4Z

However, he probably lands in the best spot any rookie could ask for.

The Bills can bet on the athletic ability of Derick Hall. So far in his college career, he has been super rough around the edges. In this mock, the Bills land an amazing athlete at the 32nd pick in the 2023 NFL Mock Draft.

Florida Panthers head into Game 5 tied 2-2 despite visible concerns in the ...
Scroll to top