The Miami Heat faced off against the Denver Nuggets on Saturday afternoon, which was the first official game of the NBA restart for Miami. The Heat came away with the win 125-105, while the Heat seemed to clean up all of their offensive and defensive issues. Here’s my 5 takeaways from this Heat win…

Bam Adebayo is a clear defensive minded player, which we’ve seen against all types of match-ups all season. But, he showed his offensive importance in today’s game against Nikola Jokic the best way he knows how to. Attacking weaknesses. Bam began to attack the basket on Jokic to start the game, since he lacks on the defensive end. This isn’t all he did for the Heat on offense though. He’s the most important player on the team without the ball in his hands. His off ball screens, on ball screens, and cutting to the basket was all on display today. He’s also an offensive player that is impacted by confidence. When he gets going early, it’s pretty much a wrap for his opponent on defense.

#2: Duncan Robinson continues to be much more than a shooter.

It’s pretty obvious Duncan is one of the league’s best three point shooters. But, he continues to show the improvements in the other aspects of the game, especially his passing. Bam Adebayo has played a major role in the improvements in his play-making. Bam and Duncan have been deadly off of dribble hand-offs this season, but they are starting to expand this scheme even more. After defenders have learned not to leave any space between Duncan Robinson, he has learned to not only make the pass to Bam, but sell the shot. This is the first time he’s showcased this side of his game, since he’s getting much more comfortable with his shot faking. Now the only thing left for him to improve is on the defensive side of the ball.

The biggest thing you can takeaway from this game is the amount of foul calls. This is most likely due to the no fans aspect, since referees can hear everything on the floor. And well, this seems to favor Miami. Jimmy Butler has had no problem attacking the basket and getting to the line all season, but what was key today is the fact that he was knocking them down. The Heat went 32/37 from the free throw line, which seems to be much more important than usual. And when the game slows down even more in the playoffs, we may see even more foul calls, especially with the many physical players on this Heat roster.

It was a bit of a surprise that Erik Spoelstra took Meyers Leonard out of the rotation for Jae Crowder, since that starting lineup had such success this season. But, it seemed to payoff since Crowder hit some big shots in the third quarter, which played a major role in expanding the lead. Spoelstra also seems to play guys that perform well together. This includes Jae Crowder and Kelly Olynyk, Bam Adebayo and Duncan Robinson, and Jimmy Butler and Tyler Herro. This is why those scrimmage games were so important for Miami. It gave Erik Spoelstra a sample of what to expect in this environment and forced him to adjust, which is something he does better than any coach in the league.

The Heat have known that their biggest issue this season has been perimeter defense. But, they seemed to polish this up a bit today against Denver. The Nuggets shot 8/35 from deep, which definitely makes the Heat feel good after those sloppy scrimmage games. This may be due to the rotation change that Spoelstra made, replacing Meyers Leonard with Jae Crowder. The more versatility on the floor, the less your defense will struggle. Even Duncan Robinson showed some good defensive stretches throughout this game. These defensive improvements may have a little something to do with the lack of shooting in the rotation for Denver, due to Jamal Murray, Gary Harris, and Will Barton not playing. Either way, this gives this Heat team confidence and momentum heading into three straight games against the top 3 teams in the East. 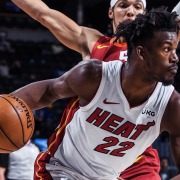 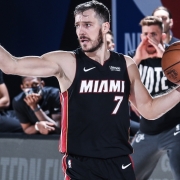 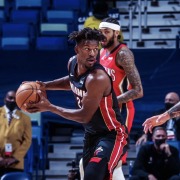 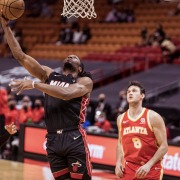