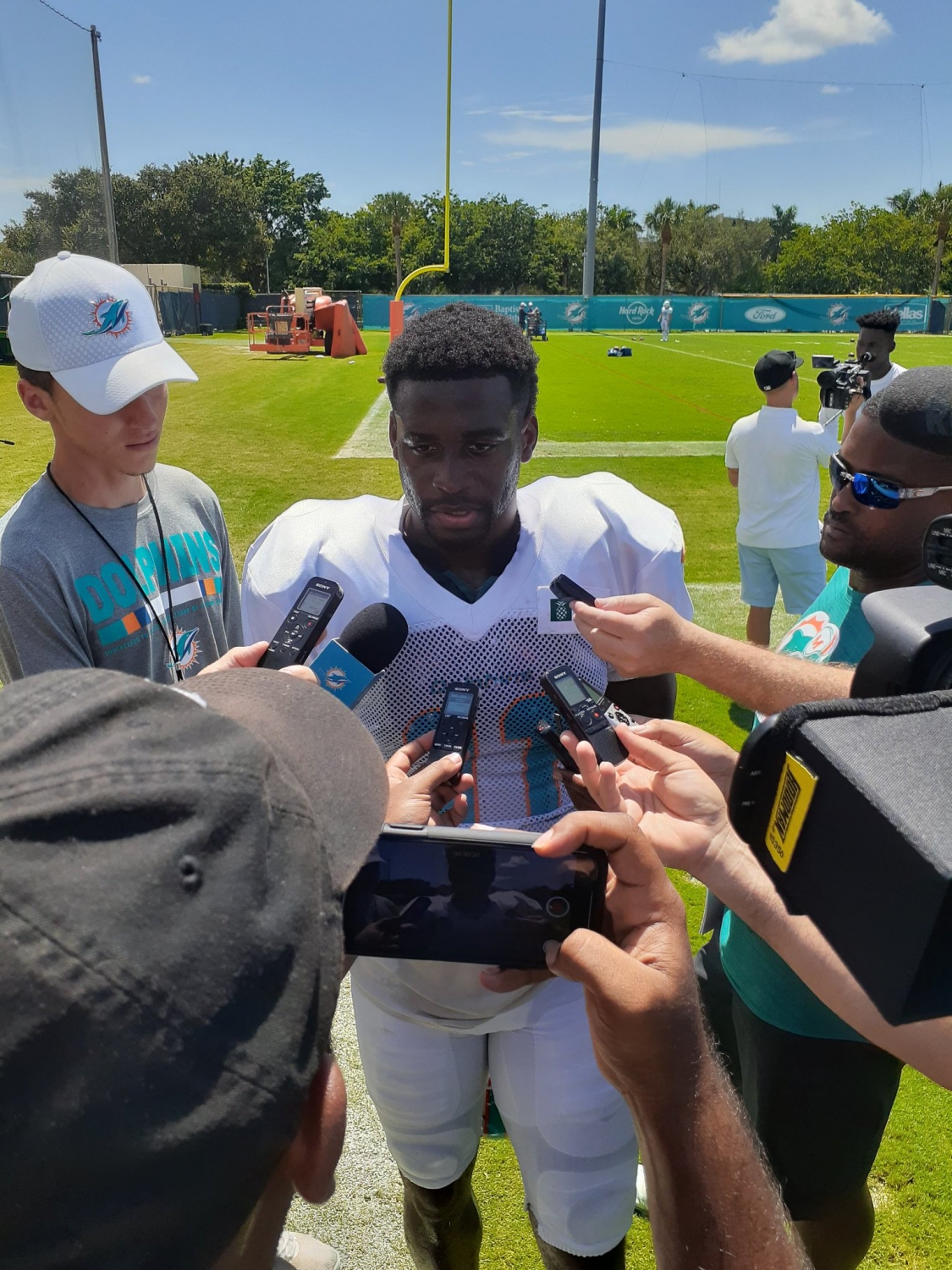 – Rainy, miserably morning. Could we have our first indoor practice of the new regime?
– We will be outside today. No bubble time today.
– Run of the mill stuff from Coach Flores today.
– Want to impress me? Do it in the kicking game.- Coach Flores
– Coach Flores confirms he is not a “bubble guy”. Team has to get acclimated to this weather. Camp is supposed to be hard.- Coach Flores
– Kiko Alonso to be back in a day or 2- Coach Flores
– Kiko Alonso, Kalen Ballage, Clive Walford OUT for practice today. Nothing serious on Ballage.
– Tankersley, Hull remain on PUP list.
– Dwayne Allen returns.
– We have a crew of officials today, for the first time in Training Camp
– Michael Dieter at LG, Shaq Calhoun at RG on 1st team OL.
– Far field work today.
– Appears early on that Josh Rosen is working 2nd team.
– Team stretch.
– QB warmup ongoing. Sharp. No complaints today.
– Jake Rudock doesn’t have a terrible arm, but it’s not good either.
– The WR group is probably the most athletically gifted unit on the team. Their warmups tend to always be sharp, impressive. There are a lot of pros in that group.
– Shaq Calhoun in OK drills. Displays short choppy steps hitting his mark on a reach drill. Good stuff.
– QB warmup going off without a hitch.
– Yep. Rudock back to scout team work. Rosen to the 2nd team.
– Michael Dieter obliterates Godchaux on a play action look. Well executed.
– Nate Orchard looks best in pass rush drills. He has been bad this camp against the run.
– TJ McDonald being called for Defensive holding on 1v1. Expected. Man to Man in space to him is foreign. The worst of his skill sets.
– 7v7 now.
– Josh Rosen having a sharp segment to practice here. Good to see. Fitzpatrick however….been better. Both are sharp, so that’s good to see.
– I don’t usually talk like this, but this Defense with better personnel, namely on the edge, and in secondary, is going to be a problem. Tricky, smart, versatile. Multiple looks, movement. Baiting coverages….very happy with this.
– Eric Rowe….near pick six on Fitzy. Intended for Stills.
– Xavien Howard, picks off Fitzy. Intended for Preston William’s. Under cut the deep in cut.
– Rudock deep out to Grant. Hartage in coverage.
– There was a Rep deficiency for Josh Rosen in that last 11v11 segment.
– Special Teams Work. Jakeem Grant leaves practice with a leg issue.
– Some 7v7 here.
– Durham Smythe quietly having a good camp.
– Josh Rosen still not trusting what he sees. Too many check downs for a Camp practice in July.
– Michael Dieter T.N.T. wall……false start. Can we do that in games too?
– Josh Rosen sails an out route to his comfortable side (right).
– Josh Rosen with a sharp out route completion to Preston Williams.
– Andrew Van Ginkel sure does blast off that edge. Him and Orchard, most noticeable of the edge guys. Harris is being asked to do many other things.
– Fitzpatrick seems to be experimenting with things. Picks ensue once again.
– Fitzpatrick executing a 2 minute drill. Coach Flores steps in to call Timeout after gaining 12 yards. FG try with no football. Seemed to be an alignment, time drill.
– Josh Rosen, does the same. Completes a bubble screen. That’s a wrap. That’s practice.
– After practice, we in the media met with NFL officials so they can explain the new rule changes. More on that on another date.