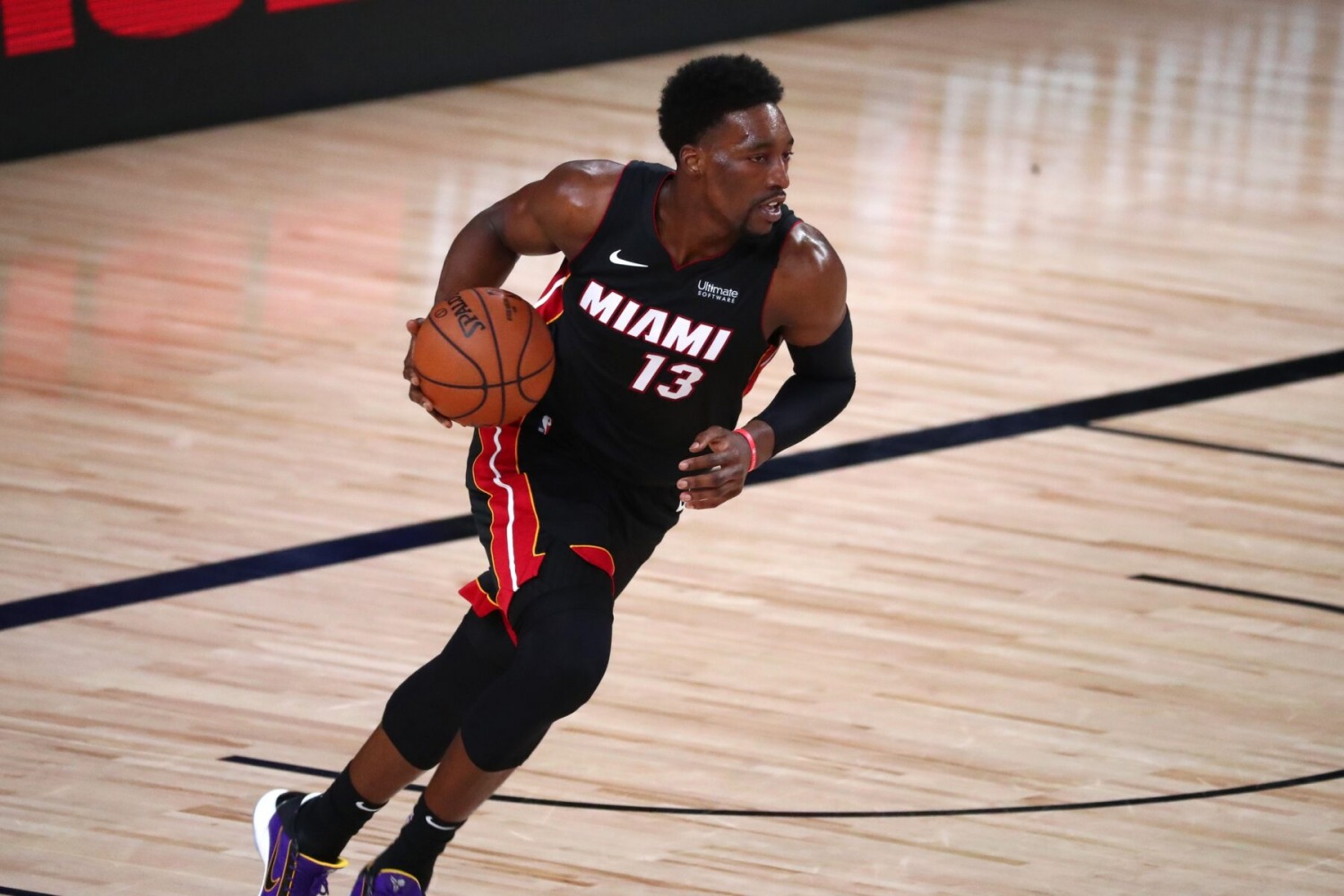 Once the deal was finalized, sending Kyle Lowry to Miami in exchange for Goran Dragic and Precious Achiuwa, one guy came to mind when evaluating the Heat’s updated roster: Bam Adebayo.

The point guard-center connection always means a little more than other positions, especially when they’re going to be two of the primary players on the roster. Adebayo hasn’t played next to a true point guard in Miami up to this point, and well, that one position shifts his entire offensive effectiveness.

A guy that can get him in his spots, put the ball above the rim for an athletic and dynamic finisher, and maximize players around him with his leadership is all Adebayo needs to take that next step.

But before diving immediately into the next leap, we must discuss the things that will be reiterated heading into the new season. So, let’s hop right into the ways that Adebayo will be utilized in the offense next year.

What will carry over into next season?

The consistency in Adebayo’s mid-range jumper was the big leap last season. He would set up shop on the elbow after rolling off the DHO or PnR, and it began to make him a much bigger threat for opposing defenses.

Aside from the previous playoff series against the Bucks where Brook Lopez socially distanced from Adebayo on the elbow, most teams get up in his grill when he turns into face-up position. There are a couple reasons for this, but the first is that is where his play-making is deadliest.

He can make difficult passes over the top, sprint right by off the dribble, or just try and get into shooting motion inside the arc. But the question became: how can he generate both space and rhythm before firing?

Well, that’s where the jab step comes into play.

Not only were his pump-fakes not a true threat when being defended closely, but it just never created any type of reaction in one-on-one situations. The jab step, on the other hand, gets defenders feet moving. And that’s all Adebayo needs before using his undeniable quickness.

Looking at the clips above, you can see exactly what it leads to. The front foot always gets pushed backward, and it gives Adebayo the confidence to let it go without much of a contest. But that’s not even the main thing the jab step does for him.

As mentioned earlier, it’s more about rhythm. Every player has a specific wind up that gets them into their shooting motion. No matter if it’s a normal one-two foot plant around a screen like Duncan Robinson or a shoulder bump in the post like Omer Yurtseven, every single player has that one thing they rely on.

That’s why we see Adebayo use it even when it isn’t necessary. It gets him into a comfortable motion and can lead to good things as the shot clock is expiring. Many things will take leaps this year, but certain things like the jab step just need to “carry over.”

The other thing that we’ve seen since Adebayo’s rookie season that will be utilized more than ever before is the lob pass and overall roll usage. This is what makes the Lowry-Adebayo connection so dynamic.

Looking at the clips above, we see Gabe Vincent being the facilitator and creator in these pick and roll sets. And if an off-ball spot-up guy can get Adebayo in his spots in this fashion, just think about the things Lowry can do.

The first clip is a pretty typical top of the key pick and roll before finishing the lob pass, but the second clip is a Lowry-esque possession. Vincent uses the attack to create a switch on the block, before feeding Adebayo down low with the mismatch for the bucket.

This stuff will be simple translation, which is why it’s just about carrying over the basics. Many of these sets will be expanded on as the season goes on, but there’s no doubt in my mind Adebayo will have an immediate pick and roll connection with Lowry, due to both of their overarching strengths.

What needs some improving?

When being asked the question about the most necessary addition to Adebayo’s game next season, I would probably start with post play instead of three point shooting. The reason for that is if three-point shooting became a part of his game, it would probably just be from the corner which doesn’t truly move the needle.

If shots are being made from above the break, then that’s a completely different story. Adebayo as a top of the key or wing threat outside the arc changes the entire offense, due to the difference in spacing with the ability to pop out in every base action.

But that just doesn’t seem to be coming at this moment, since other parts of his game are being improved first, such as fully rounding out the mid-range jumper. Post-play, on the other hand, isn’t as much about skill-set expansion as it is comfortability and reps.

There are things that can be taken away from the two clips above, so let’s start with the first one. Doesn’t seem like anything major, since he has a guard down low on the block leading to a double coming from the top of the key. He kicked it out which ended in a Kendrick Nunn bucket.

The issue is that when his back turns to the basket that early, it is known a kick-out is coming. He’s a fantastic passer with his back to the basket, especially when he is able to play-make over the top of guys when he has the height advantage.

If that isn’t adjusted, teams will be very prepared by next season when they see him turn into the post. We saw some flashes with Team USA where he used some spins into base-line jumpers, and clearly, that’s all that is needed.

A go-to move down there when things begin to breakdown on the perimeter for potential kick-outs is the most important development. With a PJ Tucker front-court pairing, they already have their corner spacer, so it’s up to him to diversify the offense to make defensive scheming uncomfortable.

Although I’ve discussed the ways Adebayo can score as a roller off the screen, there’s still one more layer to that. One thing he was really good at last season was drifting down into space for easy floaters and push-shots.

Guys like Kendrick Nunn and Tyler Herro love to avoid the screen at times to try and navigate inside the arc in different ways. That initial movement leads to the pick and roll defenders shifting a bit as Adebayo can just search for a dead-spot.

The guard can then dump the ball off to him down low for an easy shot. But what part of that needs to improve?

If that stuff was happening with last season’s roster, imagine the extra space he will have with Lowry in that action. It was highly effective whenever it was used with Jimmy Butler, and the reason for that is his downhill gravity.

Adebayo will be able to get these type of looks, but it will be about making instinctive decisions instead of overthinking his placement after the screen is avoided. The two clips above show him being decisive after the ball begins to flow, and it leads to a rhythm floater.

Once that quickness and comfort is seen below the free throw line without the ball, it’s another minor part of his game that can really help the offensive production, particularly in non-Butler/Lowry minutes.

What offensive actions will we see frequently?

Now to the actions that can be run around Adebayo next season, this topic is endless. Shooters like Robinson and bigs with guard skill-sets like Adebayo are two guys that are easiest to scheme around. That’s why I’m highlighting the base sets Miami will go to.

I discussed double drag when talking about Butler’s role in my last piece, but Adebayo will be the true winner here. We’ve seen it used in the past, but the issue was that there weren’t as many options across the roster to mix it in.

Next season, the combinations are fluid: Butler as the ball-handler with Lowry popping and Adebayo rolling; Lowry handling, Robinson popping, and Adebayo rolling, etc. But a constant staple will be the three-man combo seen in the clip above.

Butler’s ability to attract eyes when slashing hard is like no other, while we already know the way Robinson and Adebayo are viewed in their respective slots. That leaves Lowry as a possible off-ball corner threat on this play, which makes things even more difficult to guard.

And well, that is the expansion with this action. Things will look pretty similar inside this set, but I believe the frequency increases majorly. Now that they have a starting lineup that fills the holes of this action absolutely perfectly, there’s no reason not to spam it in offensive droughts.

And that will absolutely enhance Adebayo’s effectiveness.

Lastly, we have another point to be made that was noted when talking about Butler. I have gone on and on about the importance of inverted pick and rolls with Butler and Lowry, due to his high level screening for his size, but Adebayo is the true gem here.

The constant discussion throughout the season was how can Miami find ways to get Adebayo flowing downhill. The first thing that worked was using Robinson’s gravity to get him on the move. They ran some high pick and rolls with him to create 4 on 3’s with Adebayo, but the scheming didn’t stop there.

When Robinson is on the move off the ball, his man stays glued to him and isn’t afraid to grab him to eliminate any space for an advantage. He then began running his man into Adebayo’s defender as a screen, which gave him a wide open lane.

The inverted pick and roll seemed too easy for that duo.

In the second clip above, you see an example of that. Robinson battling through for the pick, a switch is forced, and Adebayo gets to the basket for the tough lay-in. But it shouldn’t have to be a Robinson screen every time.

Looking at the first clip above, the initial set is an empty corner inverted pick and roll with Adebayo and Butler. It puts Butler on the short roll where he thrives, and gets Adebayo a wide open pull-up middy with zero help at the nail.

That’s the expansion. It isn’t just about Adebayo finding ways to get himself and others good looks in the action. It’s about him realizing he essentially is the action.

As Butler responded when I asked him about this topic earlier this season: “He’s damn near unguardable whenever he’s playing like that.” And that’s exactly it. When confidence is high and his abilities are peaking, he frankly can’t be stopped when combining his size and skill-set.

Just watch his 41 point performance against the Brooklyn Nets for further assurance. 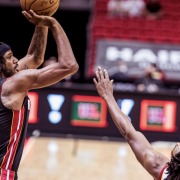 5 Takeaways from Heat’s Win Over Cleveland 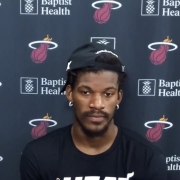 Heat Check Gaming, like the Heat, had an up and down season
Scroll to top