There are many guys on the Heat’s off-season radar right now, since they’re trying to find the right guy to add to this team to try and get this team back to the finals.

When discussing some possible trades, there’s been some big names that have come up including Victor Oladipo. But with that, you are probably going to have to give something up that you don’t want to, and there is uncertainty with his health. There’s also some concern about his actions in the playoffs when he lost to the Miami Heat.

Is he a Miami Heat type guy?

Well, there’s another guy that has proven he’s a Miami Heat type guy.

Josh Richardson was obviously included in a package to get Jimmy Butler last year, but it’s definitely not out of the question of a possible return.

I’ve mentioned before that Miami may not need a home-run pick-up this off-season, but instead the perfect fit. Josh is the perfect fit, since he fills the holes on this current team.

He’s a defensive first guard, who also is very capable of scoring the ball. If Miami could use a Josh Richardson to guard a Kemba Walker in a playoff series, that takes such a weight off of Jimmy Butler and others.

He also would not have to play the same role that he played while in Miami before. Instead of running the offense, he would be a facilitator on the wing who can hit the occasional three and attack the rim.

In Philadelphia, he was playing a role that doesn’t fit him well. For one, he was the only shooter on the floor with the starting lineup, which means that he had to carry the load of a role that he’s not extremely comfortable with.

But what would it take to get him to Miami?

Well, that’s not very clear, but it’s expected that it would include Kendrick Nunn, Kelly Olynyk, and the 20th pick. This is the trade that has been discussed with the other big names, but there’s no uncertainty in the player you are receiving when discussing Josh Richardson.

He also has a relationship with a bunch of guys on the roster still, especially Bam Adebayo.

The organization definitely hasn’t forgotten about Josh as well, since he was their second round steal in 2015.

Obviously this is all speculation, but it just seems there’s no better player to add to this team this off-season than Josh Richardson. Having Josh Richardson and Tyler Herro as your starting back-court seems pretty ideal, since Tyler can take the scoring reigns and Josh can take the biggest defensive assignment.

This pick-up makes the most sense for Miami, and also would be great for the individual success of Josh. If Miami could pull this trade off, it would basically mean that they traded Kendrick Nunn and Kelly Olynyk for Josh Richardson and Jimmy Butler, which would once again prove the genius front office of the Miami Heat. 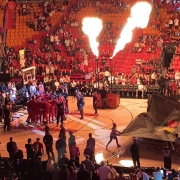 On Wednesday the Miami Heat opened their season with an impressive home win without Jimmy Butler.

His former team the Philadelphia 76ers did the same, dispatching the Boston Celtics 107-93.

Josh Richardson had 17 points and six rebounds in his debut for Philly, but his performance afterwards garnered more attention.

“They were on time. That was great.”

It seems like no matter the sport, when higher profile athletes leave Miami it doesn’t always leave them.

Now Heat fans catch a lot of, well heat, for punctuality and that one time in the playoffs something happened.

Miami time is a thing. So is South Florida street gridlock.

However make no mistake, Heat nation shows up night after night.

And the kids will be alright.

Philadelphia is an incredible basketball area on all levels, that should be stated.

That being said, it seems like J-Rich is already starting to trust a process that has yielded zero conference finals since his team was all in diapers.

If you follow the NBA and its players on social media, Twitter in particular, you know there is no love lost between these two organizations.

The difference is, one actually has the culture and the banners.

While the other has a process of playoff elimination annually.

Catch the 5 Reasons crew at their next watch party this Saturday ( yes, we know) when the Heat travel to Milwaukee to face Giannis Antetokounmpo and the Milwaukee Bucks.

We have a watch party Saturday.

In the morning, we will post my 35-minute conversation with former Heat forward Chris Bosh, on everything from cologne to controversy to glory.

And we will insert the link here, so you can listen to all of it, on Apple or Android.

But here’s one clip that may get some attention.

Bosh has never been shy about sharing his opinions; he doesn’t do it to create a stir, he just is incapable of anything but authenticity. So it wasn’t surprising that, when asked about the Heat’s “Kids” — generally classified as Justise Winslow, Josh Richardson, Bam Adebayo and recently Derrick Jones Jr. — Bosh shared his true feelings.

But it speaks to where the Heat organization stands.

And if you want an even shorter synopsis of that, here it is:

"The upside is tremendous, but it's on the players… That was one of the things I was disappointed in w/ the guys, I didn't feel anyone was really taking the bull by the horns to be the new leader. You know, Dwyane is leaving, guys." @5ReasonsSports

But listen to the whole podcast.

Bosh, as a talker, is still the best.

ESPN’s Adrian Wojnarowski is reporting that Miami Heat guard Josh Richardson could miss up to two weeks after sustaining a groin injury last night against the Celtics.

Sources: MRI on Miami guard Josh Richardson’s groin reveals no damage, but he could miss two weeks — which is an obvious blow to Heat’s chances of securing a playoff spot in final days of season.

This is the second major injury that has affected the stretch run for the Heat, after Justise Winlow missed 9 games with a thigh injury.

Now with Richardson out, and season deciders against Minnesota, Toronto, Philly, and Brooklyn still to play, you’re left to wonder if the Heat can make up the half game difference between themselves and the 3 teams in front of them for the final playoff places in the Eastern Conference.

New movement on the #NBAPlayoffs Picture!

The Miami Heat need just about every game from here out…. and would seem to need every key player.

They won’t have two of the Kids for the next two games, however.

Neither Josh Richardson (heel) nor Justise Winslow (thigh) traveled to New York for the opening contest of a short trip that finishes in Boston.

That means Goran Dragic will continue to start at point guard, with Derrick Jones Jr. also likely taking a spot in the lineup. It also means that the Heat will rely heavily on Dwyane Wade and Dion Waiters to provide offense.

That should be enough against New York.

Against the Celtics, who are trying to grab a homecourt seed in the East?