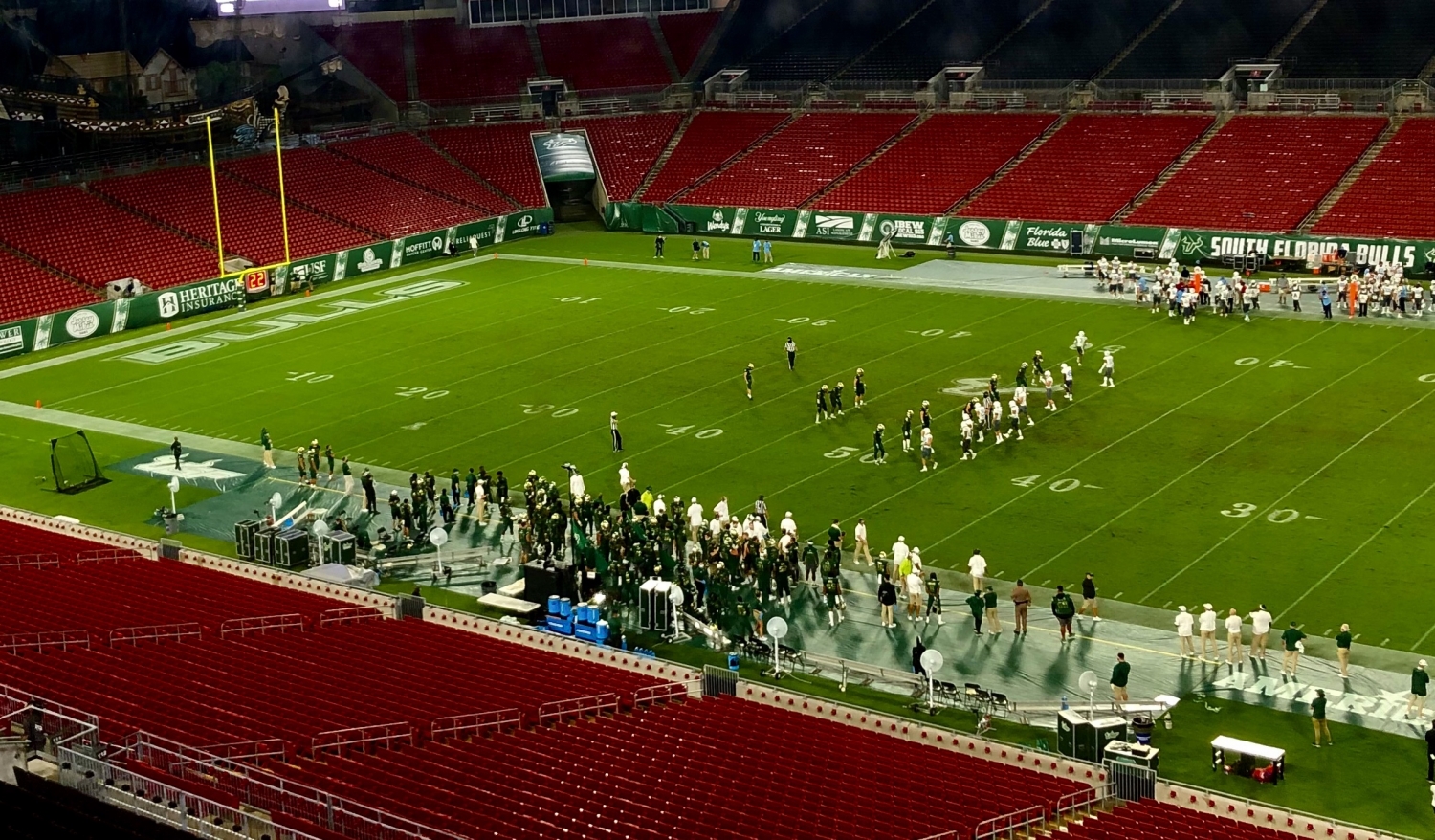 In an episode of “Batman The Animated Series,” in which the hero was perceived to be out of the picture, the Joker tried to take advantage of the caped crusader’s absence by robbing a jewelry store. At the end, the Joker lets out a deep sigh with a long face and says, “Without the Batman, crime has no punchline.”

The 2020 college football season feels the same way. Saturday’s game between the South Florida Bulls and the Citadel Bulldogs was the first game this year with zero spectators in attendance.

Without fans, college football has no soul. What’s the meaning of an upset without the sight of the distraught home fans covered in body paint putting their hands over their head in disbelief?

A full stadium is the ultimate stage in sports, but this game looked like a dress rehearsal. Especially when considering The Citadel uniforms. The Bulldogs took the field wearing a plain white helmet with two blue stripes on top and no logo, a blank white jersey with just blue numbers in standard font, no name or stripe, and grey pants. They looked like the generic football team in the commercials.

Matchups between FBS and FCS teams are usually the dress rehearsal of the season but that never stopped fans crowding the perimeter of the stadium, tailgating, celebrating the return of football in their town.

There was none of that in Tampa. While Florida State and Miami opened their season with a small number of fans at the games, USF elected to not allow anyone but media and staff into the stadium for their season opener, waiting until their conference slate in October before allowing a small number of spectators.

“We’re starting over,” Scott said. “This is a new era. This is starting a new decade. We’re gonna start in front of no fans and then hopefully we get back in October and start building it. It goes to 15,000 fans and if the guys truly buy into what we’re doing, I have a vision we’ll fill this stadium up in the future whenever we’re allowed to.”

USF defeated The Citadel 27-6 with relative ease. The Bulls players seemed to not even need the energy normally supplied by fans in attendance. They did that themselves through cheering and dancing.

“I really don’t care too much about fans,” USF receiver DeVontres Odoms-Dukes said. I was more focused on catching this touchdown pass, helping the team win and celebrating with my teammates. Those are my fans.”

Dukes also said that having fans cheer the team on will be helpful and is indeed missed but the sentiment has long been there. Players have always been so isolated from college student body and the locals that it creates a sense of separation. The players are taught to believe that they only have themselves and everyone else is either the enemy or irrelevant bystanders. The COVID-19 pandemic has only exasperated that.

The corona virus ravaged the United States and the rest of the world. It has caused fear and division among us. Like a post-apocalyptic Dr. Seuss world where we are divided up between the sneetches with stars and without, but the stars are replaced with masks in this reality. Everybody should wear a mask, but nobody wants to. To wear one is for protection, but it is also an annoyance, especially if you wear glasses.

A week will not go by where instead of scrolling on Twitter every Saturday for college football jokes, you’ll end up with video clips of people bunched together and the fear mongering that will come with it.

The PAC-12 and Big-10 have decided to postpone their football season to the fall, although the ladder is reconsidering due to public backlash. The other conferences are going out as planned but with a small number of allowed fans spread out around the stadium.

It is a noble attempt but it’s just not the same. Without the normally sold out crowds, college football is nothing more than a television product suitable to long distant fans and those looking to make a quick buck based on an accurate prediction.

Heat’s Goran Dragic, on a Tear, is Hardly Done