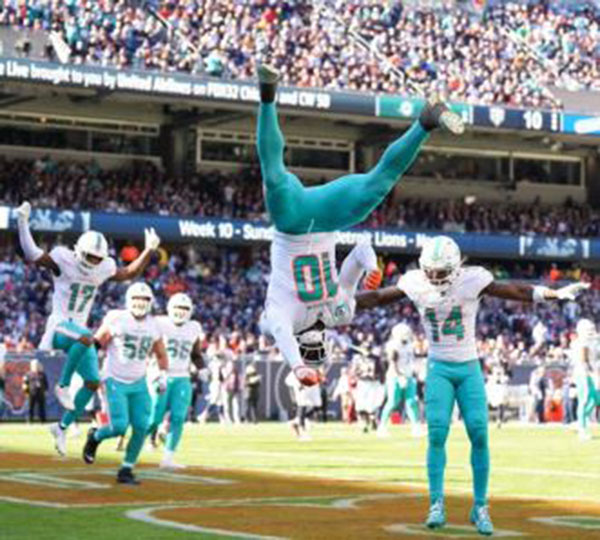 The plot has certainly thickened in the AFC East race after the Miami Dolphins held off Justin Fields and the Bears in Chicago and the resurgent New York Jets put the kibosh on Josh Allen and the Buffalo Bills in the second half at the Meadowlands on Sunday.

That left the Bills, Dolphins and Jets each with six wins, Buffalo holding a thin grip on first place at 6-2, having played one fewer game. The Dolphins and Jets, each 6-3, have a tiebreaker advantage over Buffalo, as New York does over Miami.

With New England close behind at 5-4, the division couldn’t offer more intrigue entering the second half of the season. All four teams are over .500 after nine weeks of play.

This would be an opportune time for the Dolphins to have a bye week and catch their breath after chasing Fields all over Soldier Field. But first they must face the Browns, with one of the league’s best rushing offenses, before getting a week off to sort out their defensive woes.

Meanwhile, the Dolphins are on a three-game winning streak after prevailing in one of the wildest games of the season, 35-32 in what was a showcase of two of the NFL’s most exciting young quarterbacks.

The numbers were insane.

Tua Tagovailoa completed 21 of 30 passes for 302 yards, with three touchdowns, no interceptions and no sacks.

Fields not only threw for three touchdowns, he ran for another while setting a regular-season rushing record by a quarterback with 178 yards on 15 carries.
As frustrating as it was to watch Fields run around and through the Miami defense, including a 61-yard touchdown scamper, it sure was entertaining to watch Tagovailoa shredding the Bears’ pass defense, averaging 10.1 yards per attempt.

Tyreek Hill had seven catches for 143 yards and a touchdown, and is now over 1,000 yards receiving for the season. Jaylen Waddle also had a TD grab while catching five passes for 85 yards.

Running back Jeff Wilson, whose acquisition from the 49ers last week was overshadowed by the trade for pass-rush stud Bradley Chubb, ended up leading Miami with 51 yards rushing while averaging 5.7 a carry and caught what proved to be the winning touchdown pass.

Ironically, Tua put the victory in jeopardy by misfiring on fourth-down passes on consecutive drives into Chicago territory in the second half. But the Dolphins defense finally got the game-sealing stop with a sack by Duke Riley followed by two incompletions.

The hope is Chubb’s presence will elevate the defense when he gets fully integrated into the unit — he provided pressure that helped force a punt in the third quarter. But there are more problems in containment and coverage than one player can solve.

Pro Bowl cornerback Xavien Howard isn’t playing at that level as he copes with a lingering groin issue and counterpart Byron Jones still has not played this season and who knows if he will.

Fortunately for Miami, Tagovailoa is healthy and playing the best he has in his career, making full use of the most dynamic receiving duo in the game. Hill is a legitimate MVP candidate.

Dolphins go as far as Tua and Co. take them

The teams Miami is vying with in the division are in sharp contrast to the Dolphins’ strengths. The Jets are getting it done with defense and running the ball; that was a winning formula Sunday against Buffalo. The Bills have one of the league’s top defenses and the sort of running quarterback in Allen that has given Miami fits.

Having to win high-scoring games may not be the classic formula for success. But as long as the Dolphins keep Tua upright and he can keep the offense rolling like the past couple of weeks, they have a chance to make it interesting and entertaining the second half of the season. Sunday’s win at Chicago was all of that.