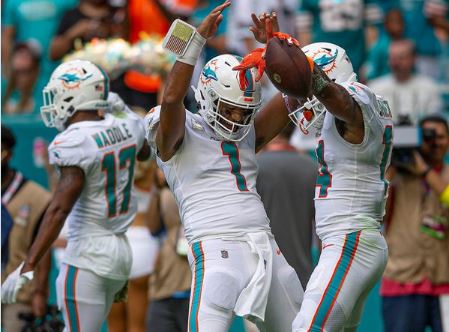 Tyreek Hill said he’s going to the Bahamas to “sit by the beach and drink some mimosas” during the Miami Dolphins’ bye week.

The star wide receiver has certainly earned it, a major reasons the Dolphins are 7-3 and alone in first place in the AFC East following Sunday’s 39-17 romp over the Cleveland Browns — and Buffalo’s subsequent loss to Minnesota.

It wouldn’t be surprising if Jeff Wilson Jr. followed Hill all the way to Paradise Island, just as the running back did on the way to the promised land of the end zone Sunday with his speedy teammate waving him through like a motorcycle cop clearing the express lane for a VIP.

That was one of an inordinate number of giddy, feel-good moments in the Dolphins’ fourth consecutive win that featured so much dancing and jiving and celebrating it was as if everyone at Hard Rock Stadium had taken a deep hit of helium and was jabbering with high-pitched glee like Minnie Mouse.

I mean, when have you seen this team so well in sync?

There was Wilson, who seemingly materialized out of thin air in an oh-by-the-way trade deadline deal by GM Chris Grier, running for 117 yards at a 7.0 per-carry average.

The much-maligned offensive line not only kept Tua Tagovailoa sack free, it paved the way for a team total 195 yards rushing, with Raheem Mostert going for 65 yards while averaging 8.1 a carry including a 24-yard touchdown gallop that broke the game open on the first possession of the second half.

There was the defense overcoming a shaky start and turning in one of the better efforts of the season with newcomer Bradley Chubb beginning to show the impact he can have with half a sack and three quarterback hurries.

tua with a perfect ball to sherfield for 6 pic.twitter.com/aJrVGGNv1Q

And most significant, Tagovailoa summoning chants of “MVP, MVP, MVP” with a third consecutive sublime performance of three touchdown passes, no interceptions and passer rating of 135.0 or better.

Not only has he not thrown so much as a near interception in the past three weeks, it’s tough to recall a pass that wasn’t right on target. The absolute dime he delivered to Trent Sherfield in the corner of the end zone was worth watching over and over again.

One other thing of note: the Dolphins didn’t punt in the game.

“He’s have my vote.” — tyreek on Tua for mvp pic.twitter.com/ebYOYqTdLW

Considering Tagovailoa missed 2 ½ games with a concussion (or two) and there were serious questions about his health and future, the Dolphins arrived at their well-deserved week off sitting about as pretty as anyone could have dreamed.

Then the first round of mimosas was delivered on the house courtesy of the Minnesota Vikings winning 33-30 in overtime at Buffalo in as compelling of a regular-season game as you’ll see this or any season.

That gifted the division lead to the Dolphins, who had already lifted themselves into a rarefied place.

That was noted in the tweet of the day by Tim Reynolds of the Associated Press, who wrote:

I asked Dolphins QB Tua Tagovailoa if he ever envisioned hearing MVP chants raining down on him at Hard Rock Stadium, like today:

"No, I didn't. I didn't because a lot of the hard work we've put in. We're just so focused on how we can win games … You are just in the moment.” pic.twitter.com/hYla4k5RyL

Plenty of work ahead for Dolphins

In diverging from the frustrating past two decades (at least to this point), the Dolphins have positioned themselves well for the final seven-game push for playoff position, a stretch that features ample opportunity but is certain to deliver plenty of adversity along the way.

Of the four remaining games outside the AFC East, only the Los Angeles Chargers (away on Dec. 11) are over .500.

Ultimately it will be the final round against the three division rivals — Dec. 17 or 18 at Buffalo, Jan. 1 at New England and the season finale on Jan. 7 or 8 at home against the Jets — that will determine whether the Dolphins will be toasting success or drowning their sorrows at season’s end.

At 7-3 entering the bye week, they have good season to feel pretty damn good about themselves for this momentous moment.