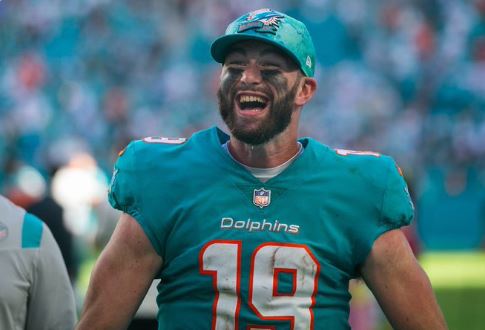 The difference between a hit and a flop is often paper-thin in the NFL.

For the Miami Dolphins, the 2022 season swung on a 50-yard field goal attempt by Justin Sanders in the final seconds of the regular-season finale last Sunday against the New York Jets.

Essentially a coin flip. Heads, he makes it and the Dolphins remain alive for the playoffs. Tails, he misses and the season ends with a sickening thud of a six-game losing streak.

Given how Dolphins fortunes had eroded in the final weeks, I wasn’t even sure I wanted Sanders to succeed until the kick split the uprights and long-suffering Dolfans erupted with joy. They certainly deserved a sip of satisfaction after the steady diet of crap sandwiches they’ve been fed by this franchise in this millennium.

The reaction to skidding into the final AFC wild-card spot (with help from the Bills defeating the Patriots) confirmed that it is always preferable for you team to make the playoffs under any circumstances — especially when the alternative would have been the ultimate despair of the worst collapse in franchise history.
The season-ending thud may well come Sunday at Buffalo against the AFC East champion Bills — all but the most unabashedly optimistic Dolphins fans expect it. But let’s take a moment to toast the success these Dolphins did have in the 2022 season.

First-year coach Mike McDaniel, who was courted by no other team last offseason, led Miami to its first playoff appearance since 2016. He produced a much-improved offense and coaxed a breakthrough season from Tua Tagovailoa before the quarterback’s latest concussion kept him out of the last two games of the regular season and Sunday’s playoff. (More on Tua in a moment).

Superstar wide receiver Tyreek Hill was named on Friday to the Associated Press All-Pro team for the fourth time in his first season with Miami. Hill set Dolphins’ records with 119 receptions and 1,710 yards.

Hill was clearly the team’s MVP as he proved to be everything the Dolphins hoped when they traded five draft picks to Kansas City and signed him for $120 million over four years.

The big surprise and the Dolphins’ major success story of the year was undrafted cornerback Kader Kohou playing well enough to be recognized with a place on the NFL All-Rookie team by the analytics website Sports Info Solutions. Kohou held up admirably while being targeted 106 times, the most among defensive backs in the league, posting a highly respectable 80.7 passer rating.

Kohou helped fill the void of Byron Jones missing the entire season. Signing him undrafted out of Texas A&M-Commerce somewhat offsets the mistake of picking Noah Igbinoghene in the first round in 2020.

Encouraging for the future, this Dolphins team has more standout players than seen in Miami in years. Most of them are young.
Second-year receiver Jaylen Waddle led the league in yards per reception (18.1) on 75 catches. His 1,356 yards ranked seventh in the league and were third in Dolphins history.

Defensive lineman Christian Wilkins has improved progressively and in his fourth season was an absolute beast. His 98 tackles were the most by an NFL defensive lineman since 1994 and a Dolphins record.

Linebacker Jaelan Phillips made a significant transformation in his second season from a pass-rush specialist to solid every-down defender with major improvement against the run. Pro Football Focus ranked him among the top 10 edge players in the league.

Still, the Dolphins will face a much more uneasy offseason than would be expected of a playoff team. Tagovailoa’s hazy football future is the main reason for that.
In addition, the defense underachieved despite the efforts of Wilkins, Phillips, Sieler, Kohou and the midseason addition of linebackerBradley Chubb — cornerback Xavien Howard and safety Jevon Holland didn’t have outstanding seasons but remain cornerstones in the secondary.

Shortcomings of the defense, which ranked bottom-third in the league in allowing 23.5 points a game, will need to be addressed. Will that start with a change at defensive coordinator or will Josh Boyer return?

But the most vexing concern is Tagovailoa. He led the league with a passer rating of 105.5 but missed 4 ½ games while suffering two and possibly three concussions.

If Tua is cleared to return to football and wants to continue his career, he will return as the starting quarterback next season. Considering the recurrence of head injuries and the slow recovery from the most recent concussion, that is no certainty.

Skylar Thompson to start in wild card game at Buffalo

McDaniel said early this week that his only concern was Tagovailoa “getting to full health as a human being,” not his playing career.
On Friday, McDaniel confirmed that Tua is out for Sunday and rookie Skylar Thompson will start against the Bills.

As for Tua’s progress in concussion protocol, McDaniel said: “The current stage is the same as it was last. He’s been around and been good and I’m just worried about his day-to-day health. I’ll let you know when it does advance, but besides checking on him and how he’s doing, it’s a big-time life adjustment when you go from playing to being out.”

The question of longevity makes investing long-term in Tua a risky proposition for the Dolphins. They don’t even have a first-round draft pick in 2023.

skylar thompson will start on sunday vs. joe flacco and the jets. McDaniel said “skylar had an outstanding week of practice.”

Meanwhile, they will have Thompson, a rookie seventh-round pick, making his third NFL start and first playoff appearance opposite Josh Allen and the Bills.
No wonder the Dolphins are the biggest underdogs in this weekend’s playoffs, with the Bills favored by 13 points.

Coincidentally, the Dolphins went into their previous playoff game with back-up Matt Moore starting in place of Ryan Tannehill and were blown out 30-12 at Pittsburgh at the end of the 2016 season.

Dolfans certainly have reason to feel trepidation. In three wild-card appearances since they last won a playoff game (2000 season), they were lopsided loser by a combined 77-24 against the Ravens (twice) and the Steelers).

Asked about the perception that the Dolphins don’t have a chance at Buffalo, McDaniel said Friday: “I’m very used — that doesn’t make me, personally, blink. This just in — no one expected me personally to do anything that I’ve ever done, really. I think a journey of an NFL player is very similar with the amount of competition there is and how the parity is what it is. I think most guys on NFL teams have been told they couldn’t. It’s a really good football team that we’re playing, so we probably agree with people in that regard. … If we think we’re pretty good as well or have a higher opinion than everybody else, that’s not everybody else’s fault.

“If you’re happy with your investment, you can live with the outcome, regardless of what it is.”

Weather for Dolphins at Bills Sunday via @pathammer:

Temps in teens for tailgating. Kickoff temp about 30-degrees and holding steady throughout the game.

Lots of sun. Light wind. No rain or snow.

So smile, Dolfans, your team is in the playoffs. It doesn’t happen often. It usually turns out ugly. The roster has been hit hard by injuries, but so has every other team at this stage of the season. The NFL is a league of attrition and surprises.

The Dolphins have two of the best receivers in football and other talented players mentioned above. Maybe with a couple starts under his belt, Thompson will perform more like he showed in preseason than he has so far in games that count and show that he may be a viable option for the future.

By the way, Thompson will have one thing in common with Dan Marino. They are the only rookies to start at quarterback for the Dolphins in the playoffs.
Getting to the playoffs, by whatever means, isn’t nothing. Might as well take a peek.