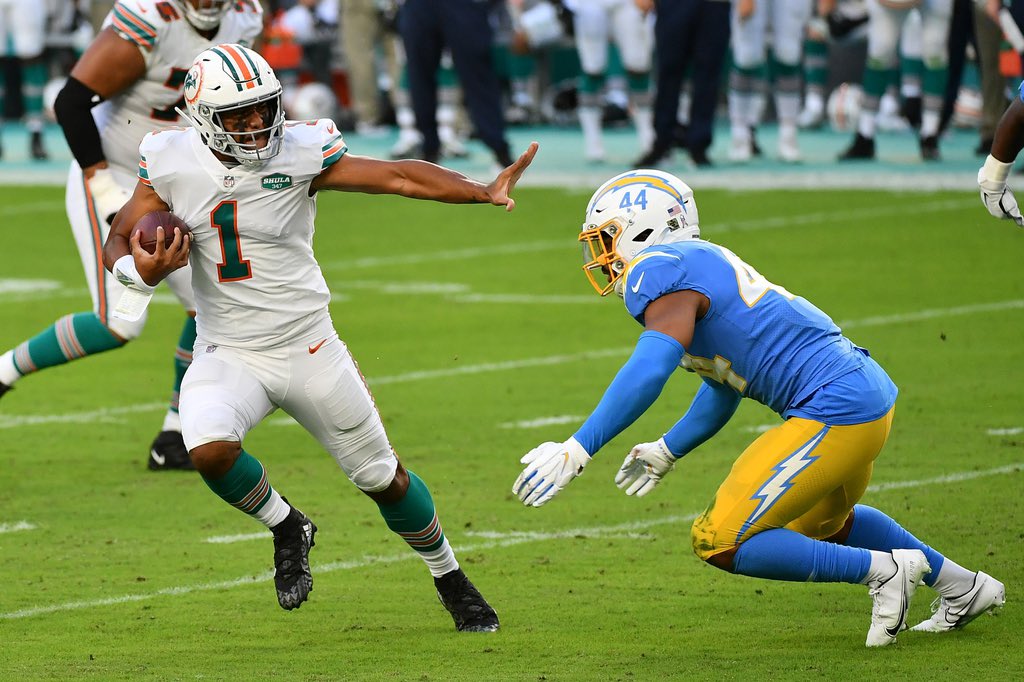 I don’t know what to call this article.

After all, it is Saturday and I’m chasing two Rugrats around the house–a day after sucking up more snow than former offensive line coach Chris Foerester– after Mother Nature dropped a bunch of powder in central PA.

(Note: And yes, I am thankful for what Ethan and the Miami Dolphins have allowed me to do in 2020. After all, I’ve been able to cover this team in a way I never could imagine. Most importantly, I’m thankful for all of you. Thank you, and Happy Holidays!)

Now back to the point. There’s a lot going on right now and instead of trying to pick and choose what to talk about, I’m just going to throw together a bunch of mirepoix, protein, herbs, spices, a little duck fat, a strand of saffron, and a drizzle of truffle oil and throw it all in a crockpot. Or, for those of you that aren’t classically trained chefs, I’m going to throw together a bunch of crap CHOPPED style, and somehow, someway, hope it turns out tres bien!

So without further ado: 5 Things I really want to talk about heading in to Sunday’s matchup vs New England.

I will never understand why this has to be one or the other. Truth is, I liked both quarterbacks very much. But I will never, EVER, say I wanted Herbert more–because that simply is not true. Furthermore, what I don’t understand is why after six games of watching Tua winning games in Miami and Herbert lighting the world on fire in Los Angeles (with some, admittedly, coming in garbage time) we are ready to call this contest?

I know that’s not how this industry works. Hell, Colin Cowherd changes his takes about as much as he changes his under pantalones.

And let’s not pretend this was ever like comparing apples to oranges.

Herbert was always the guy that compared nicely to Josh Allen and that was BEFORE Allen turned juggernaut. Tagovailoa has always been compared to Drew Brees. A guy who despite his lack of a rocket arm (Jakeem Grant still should’ve caught that 55-yard dot.) makes up for it with his football IQ, ability to work the pocket, picture-perfect mechanics, and lettuce not forget, that gd accuracy. He’s also pretty mobile too.

Herbert is playing out of his mind, no one can argue that. But I’m not ready to call this thing, not even close. Tua continues to get better and I think we will have a much better idea of what these two teams are next season. But again, it’s never going to change for me.

The Dolphins have a very good rookie quarterback who has the potential to be a superstar.

I’ll give a shoutout to my dude David Friedman (@TacoBoutSports), because he did call his shot on Lynn Bowden last week on the Business YouTube Page (PLEASE SUBSCRIBE HERE). But truth is Bowden is a versatile player that most Dolphins fans probably already had stashed on their Dynasty and Devy rosters, or were keeping close tabs on in re-draft. He was also a hell of a play in FanDuel and Draft Kings. (Yes, I paired him with Tua in FanDuel and won some cash money) Nevertheless, he’s made an impact in the passing game and as you saw vs the Kansas City Chiefs, the Dolphins reminded the entire world that Lynn Bowden once played QB.

.@miamidolphins rookie WR @lynnbowden_1 had a big day on sunday catching 7/9 targets for 82 yards. bowden led the team in targets (tied), catches, & REC yards–and is quickly emerging as one of @tua's favorite targets.

here's a look at lynn bowden jr. vs. KC. #finsup

Bowden was targeted 13 times over the last two weeks, catching 11 targets for 123 yards. He’s also starting to earn trust in fellow rookie QB Tua Tagovailoa when others on the roster may not. I think he continues to prove he belongs over the next three weeks. But it’s not exactly a straight-forward decision.

I mean, obviously, if you’re playing in the fantasy playoffs, you may have better options. But I think as we saw over the last two weeks, he’s going to need to be a factor if the Dolphins want to knock the New England Patriots out of contention and continue on their improbable run.

For the second consecutive week, Miami Dolphins’ fans did the lord’s work and voted quarterback Tua Tagovailoa as the Pepsi Zero Sugar Rookie of the Week –after his career day vs the Kansas City Chiefs. Tua set career bests in completions, (28) attempts, (48) yards, (316) and total touchdowns.(3).

Back-to-back 😎@Tua is your @Pepsi Rookie of the Week. pic.twitter.com/42AQy07wZ8

Want to see every dropback from Tua vs Kansas City?

There’s a lot riding on this game. In fact, the Dolphins can eliminate New England from playoff contention with a win this week. And how awesome would that be after the twenty years of pure hell that franchise has put us through. Nevertheless, this is a big-time game and as we’ve seen before, there’s no one more capable of attacking rookie QBs than Brian Flores…well, maybe Bill Belichick 🙂

And according to a bunch of really smart people, Belichick hasn’t lost to a rookie quarterback in his last 9 tries.

So, last week we got to see Patrick Mahomes vs Tua Tagovailoa and now this week Bill Belichick vs Tua Tagovailoa. Let’s not forget Tagovailoa said before he was named starter he would watch film every week with Flores to get an understanding of NFL defenses from his point of view. We will see how well these film sessions pay off, as he faces arguably the greatest coach in NFL history. (It will always be Shula for me)

The Miami Dolphins currently hold the series lead with a 56-54 record.

Why: Football is good

I think the Dolphins stop the run much better than they did in week 1 with Zach Sieler and Raekwon Davis playing a larger role. I also think this team realizes that the Patriots are one-dimensional. And if you can stop the run and force Newton to beat you with his arm, that’s the recipe for success.

Nothing will come easy and we know Belichick takes great pride in his ability to confuse rookie QBs. But as we saw from Tua throughout his first six games, some of his best football comes when the defense is applying pressure. Sunday, Flores and the Dolphins have a chance to put the dagger in New England’s 2020 season. And in doing so, remind the Patriots that the next 10-15 years in the AFC East will be much different than the last.

Brian Flores on his time in New England:

“I learned so much. I started in personnel. Scott Pioli hired me there as a scouting assistant. Those four years in personnel were very valuable. There are a lot of guys in that department who have gone on and done well for themselves – Jon Robinson, Thomas Dimitroff, Matt Russell, Marvin Allen was on the staff there when I was there. Lionel Vital. So I learned a lot from that group. Then going into coaching, working on special teams with Brad Seely who just recently retired and Scott O’Brien who retired a few years ago as well in the kicking game. Going over to offense, working with Bill O’Brien. When I went over to defense, obviously working with Bill (Belichick), Matt Patricia, obviously Josh Boyer, Pat Graham. A lot of really good coaches on both sides of the ball. I would say one of the guys who I learned as much about coaching as anyone is Dante Scarnecchia. I know he’s the o-line coach over there, but just the relationships he built with players and how demanding he was. I think I’ve tried to take a lot of what he did because he had a lot of success. Then just team building and being around a lot of very good players, very good coaches. I had some great experiences there.”

Dolphins team captain Kyle Van Noy on the differences between the two teams since Week 1:

“I think it’s better communication. Just playing better. I think we are comfortable with where we’re at and we’ve got to make strides to get better each time we take the field. I think as an older guy, just playing better and having everybody play better helps as well. I think it’s a lot of different things and I hope we do our best to slow it down. They are really, really good. I think they are third in rushing in the league. Their o-line is amazing. (Offensive Line Coach) Cole Popovich does a really good job getting those guys ready to go. That rookie (Michael Onwenu) is playing really well and (Jermaine) Eluemunor is playing well. The backs – Damien Harris is playing really well. Sony (Michel)’s still got juice, obviously James White is just all-around amazing. Then you’ve got Cam Newton who still runs the ball really well. He’s doing a lot of things well. They do a good job. You can splash in the receivers too. They all run the ball pretty well too when they get the ball on sweeps and different things like that. (Head Coach) Bill (Belichick) has them playing hard and he’s a really good coach and they are doing a really good job running the ball.”

“He treats every player the same, no matter how good you are or if you’re on the practice squad. He expects great things out of you. He’s a great coach. He’s going to be coaching for a very long time in this league. It’s rare that you’re around coaches like him who are fairly young, understand what it takes to win and just what goes into this game. Since I’ve been here, I’ve seen nothing but great things about him and I love that he’s my head coach. I think all the guys on the team feel the same way. We all want to play for him and go out there and players lay it on the line for him, and he does the same for us. He’s just a great head coach.”

Pressure Point: Dolphins deliver joy to fans, so enjoy it
Scroll to top