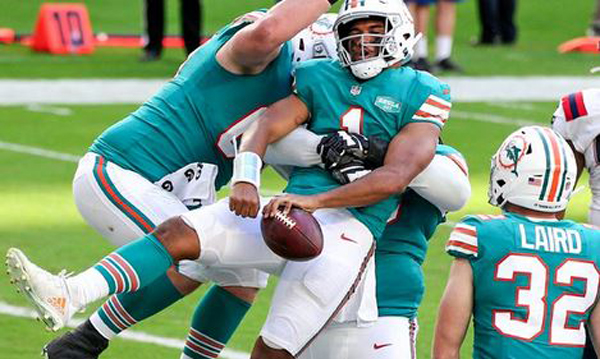 With his receiving corps decimated by injuries, veteran offensive coordinator Chan Gailey had the ideal remedy for a 22-12 victory the Miami Dolphins had to have Sunday to keep playoff hopes alive.

They ran the hell out of the ball.

A mediocre rushing offense averaging 95 yards a game stuck it to the New England Patriots for 250 yards on the ground to eliminate Belichick’s dynasty from the postseason for the first time since 2008.

Some Dolphins fans will lament that Tua Tagovailoa only threw for 145 yards and forced a pass for an interception on perhaps the most ill-advised decision of his rookie season.

Dolphins run wild in second half

Give it a rest. Tagovailoa did what he was asked to do in leading three second-half touchdown drives. The order of the day was to run, and Tua ran for two of those scores, including a nifty scramble for the touchdown that put Miami ahead to stay.

“Today we ran it effectively, so we just kept running it,” coach Brian Flores said.

A young offensive line with three rookie starters took control of the game and wore down the Patriots defense. When rookie Solomon Kindley left with an injury, second-year guard Micheal Deiter stepped in and they kept grinding.

But here’s the prime stat: The 9-5 Dolphins have clinched a winning record in Flores’ second season after beginning 0-7 in his first. They are 14-9 since then.

“I think we’ve got a mentally tough, physically tough, resilient group that knows how to deal with adversity, that doesn’t go in the tank, keeps fighting, keeps working,” Flores said. “Whatever the situation is these guys just work.”

Those qualities will be tested the next two weeks as the Dolphins continue to fight for a wild-card spot with remaining games at Las Vegas and Buffalo.

“We battle for each other. We’ll continue to do that,” Flores said. “That’s one thing I know that everyone is going to continue to work hard.”

As they did Sunday in a must-win situation with an injury-riddled offense that had six rookies starting.

One other thing of interest that Flores said after getting his second win against his former boss:

“For Dolphins fans — we’ve got great fans who are lifers and they love this team. So we’re happy to bring some joy to our fans. Because they deserve it.”

Even to those who are hung up on whether they drafted the right quarterback, drooling over the gaudy numbers amassed by Justin Herbert, taken one pick later than Tagovailoa by the Los Angeles Chargers.

So much for rookie QBs vs. Belichick factor

Much was made about of Belichick’s 21-7 record against teams starting a rookie quarterback.

The network analysts were all over it at halftime, with the Dolphins tailing 6-0 and Tagovailoa’s interception in the end zone standing out as the pivotal play of the half. Boomer Esiason talked about how Belichick’s scheme was making the rookie uncomfortable and received a knowing nod from Bill Cowher.

Safe to say that any quarterback will feel uncomfortable with all of his best receivers sidelined with injuries.

Funny how that storyline faded in the second half as the Dolphins ran the Patriots into oblivion while the defense performed as it has for the most of the season in limiting New England to four field goals.

Tagovailoa, for his part, executed the short-passing game, completing 20 of 26.

He also showed better wisdom when he scrambled out of pressure to score rather than forcing a pass as he had in the first half.

Tua exhibited his athleticism to get out of trouble and into the end zone with a juke on the last defender, prompting a question about whether he has been working on his moves.

“I tried to do everything I could to get in the end zone. I’ve just got to work a little bit more on some other dance moves I’ve got going,” he said with a laugh.

momma there goes that man. pic.twitter.com/nkCj6EfMzv

For those fixated on passing totals, Tua’s numbers will improve after the Dolphins add talent to the receiving corps through the draft and free agency.

For now, the vital number on Tua is the Dolphins are 5-2 with him as starter.

While Herbert has 27 touchdown passes, his Chargers are 5-9 and got crushed 45-0 by these Patriots a few weeks back.

Indications are both of these rookies are headed for stardom. The Dolphins are already winning with Tua, which is the objective.

As a rebuilding team, they have come farther, faster than was reasonable to expect. Flores has already built a quality defense that Dan Marino never had behind him as he tried in vain for a second shot at a Super Bowl.

The defense gave the coup de grace to New England’s playoff hopes with an exclamation point sack of Cam Newton by Emmanuel Ogbah.

With a developing offensive line, a running game like Miami put together Sunday would further serve its young quarterback. Look what having Derrick Henry has done for Ryan Tannehill with the Titans.

It figured to take at least two drafts for the Dolphins to address all the needs. So Flores and his team have brought some joy a year sooner than expected, especially considering those sorry first seven defeats of 2019.

However this season plays out, just enjoy it, Dolfans. Enjoy the joy.

Houtz Special: Five Things to dish about before Sunday’s matchup vs New...

Pressure Point: FitzMagic saves Dolphins, but don’t give up on Tua
Scroll to top