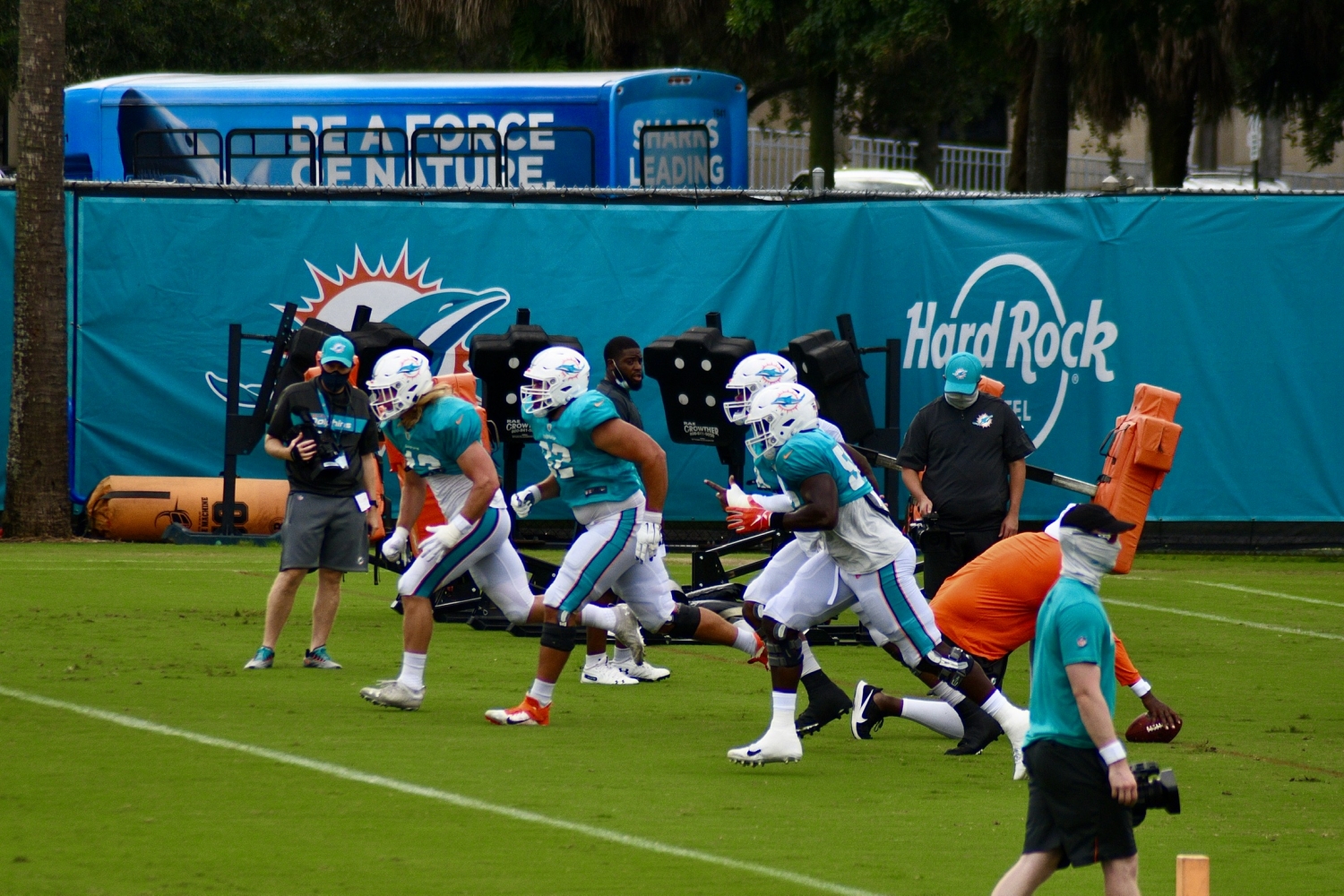 Training camp always brings interesting matchups to keep an eye on. With the amount of talent the Miami Dolphins have on their roster this year, players who would normally be locks are suddenly going to have to battle to keep their spot on the roster, or at least their starting job. So here are the top five training camp battles to keep an eye on in 2021.

The wide receiver position is loaded this year. With the addition of Will Fuller and Jaylen Waddle this offseason, Miami has an excellent mixture of speed and size to threaten defenses with. However, that does leave two veterans in a very awkward situation.

Albert Wilson and Jakeem Grant both offer speed and elusiveness to an offense. But both have their share of concerns as well.

Watch with #NFLPartner #NFLGamepass how Miami’s Albert Wilson is uncatchable in the open field. He saw green the whole way on this 74-yard touchdown, and his teammate Jakeem Grant even joined him for an early celebration. See more at https://t.co/CKsOG5jGei pic.twitter.com/2w762yUyRd

Wilson suffered a devastating hip injury in 2018 that derailed his impressive first season with the Miami Dolphins. Playing in only seven games, he caught 26 passes for 391 yards and a career-high four touchdowns. Had he played the whole season, he likely would have shattered every previous personal record he had. Then in 2019 he struggled to get back to full strength, always looking a step slower than before, up until the very end of the season where he started looking like himself. In 2020, he opted out of the season due to Covid-19 concerns, restructuring his contract to a 1-year, $3 million dollar deal.

As for Grant, last season he was voted 2nd-team All-Pro as a punt returner. Dolphins fans are well aware of what Grant can do when the ball is in his hands. However, that is Grant’s biggest flaw. He struggles to get the ball in his hands. Grant has made a few big catches in his career, but there have been just as many – if not more – plays that were left on the field because Grant either dropped or fumbled the ball at the worst time.

The battle will come down to two things. Is Albert Wilson finally back to what he was before the injury? Can Jakeem Grant catch the ball consistently when it’s thrown to him? Even the smallest doubt in either direction could be the deciding factor. There just isn’t enough room on the roster to keep all of them, so one of these two will probably be looking for work after camp is over.

There’s no question who the starting tight end for the Miami Dolphins is. He hasn’t received an extension yet, but Mike Gesicki is the first guy on the depth chart. It should also be noted that he earned that status. Gesicki started slow (no thanks to Adam Gase trying to make him block), but these past two years with Brian Flores as the head coach has turned the former Penn State standout into one of the game’s best pass-catching tight ends.

That does, however, leave the players behind him in an awkward situation. The Miami Dolphins drafted Hunter Long in the 3rd round of the 2021 NFL draft. Many draft pundits think very highly of the Boston College standout, some suggesting his ceiling could be akin to Rob Gronkowski. So why is the competition between Long and Smythe, instead of Long and Shaheen, you may be asking.

A strong week in Mobile could help cement him as a day 2 pick in this draft class. #SeniorBowl pic.twitter.com/lKzaIKDouj

The simple answer is this: Shaheen played well enough last season to earn an extension. Smythe, however, is going into the final year of his rookie deal and there’s been little talk of bringing him back on a fresh contract. Since being drafted in the 4th round of the 2018 draft, Smythe has caught 39 passes for 329 yards and two touchdowns. True, his primary role is as a blocking tight end, but the Dolphins offense thrives on versatility. In comparison to Shaheen, Smythe is the better overall blocker according to ProFootballFocus. But just barely.

This is where Long comes in. In college, Long showed proficiency as both a pass-catching tight end and a blocker. He finished second in all of college football for tight ends with 57 receptions and 685 receiving yards, beaten by only Florida Gators superstar Kyle Pitts who went fourth overall to the Atlanta Falcons in the 2021 draft. That’s an impressive feat no matter what conference you’re in.

So if Shaheen is more productive as a pass catcher, and comparable as a blocker, it’s easy to assume Shaheen is the incumbent for the backup tight end spot. So if Smythe wants to stay on the team, he’ll have to a very strong training camp to fend off the new rookie. Hunter Long is already starting to flash, Smythe needs to find a way to make himself stand out.

This is one of those training camp battles where a spot on the roster isn’t at stake. There’s no question that both Needham and Igbinoghene will make the final cut. The question is who will get to be the primary reserve player? And where?

It’s no secret that Igbinoghene has a ton of raw talent. But his struggles during his rookie season have some feeling skeptical. Nonetheless, he is still extremely young, and he’s still learning the cornerback position after spending his first two years at Auburn playing wide receiver. There’s no reason to give up on him at this point.

Not only that, with star cornerback Xavien Howard holding out for a new contract, he’s gotten an opportunity to prove himself all over again. As of now, it’s a waiting game to see what happens with Howard. Should he be traded, the Miami Dolphins will need someone to step up. That someone could be Igbinoghene.

Or, it could be Nik Needham. No matter who gets added to the roster, the undrafted free agent out of UTEP keeps finding ways to get everyone’s attention. Perhaps through sheer force of will, he’s become an excellent reserve corner and even a borderline starter. If he continues improving at this rate, Igbinoghene will be forced to look over his shoulder unless he performs at his peak.

Truth be told, no one really saw this coming. The immediate assumption was that Matt Skura would be starting at center for the Miami Dolphins in 2021. However, Brian Flores eliminated that possibility last week while speaking to the media before the end of mini-camp.

“We sign players with the idea that they are going to create competition and earn a role.” He said. “Nobody is going to be given anything. I think really at all positions, at any position, that’s always the plan. It’s to come in, compete, learn the playbook, communicate with your teammates and we’ll play the best people at whatever that position is.”

That’s par for the course when it comes to Flores, of course. Competition is crucial, the best players will play, we’ve heard it all before. But what made it interesting was the player Flores was talking about when bringing that up again. That player was University of Wisconsin offensive lineman Michael Deiter.

Here's a look at Michael Deiter playing Center for Wisconsin in 2016. You may recall from the moment the Dolphins drafted him, my observation was that Deiter had been an uninspiring LG (and LT) for the Badgers, but that his C games intrigued me a little. https://t.co/CZazcQRN5s

“I think ‘Deets’ (Michael Deiter) has really made a lot of improvements over the last two years.” Flores said. “Obviously he played a lot his rookie year and didn’t play as much last year. He moved to center – has played guard, has played center, played some tackle for us his rookie year. He can play really across the offensive line. He’ll be in competition to get playing time this year. He’s excited about that opportunity.

“Look, he’s a guy who works extremely hard. He’s competitive, tough and has a lot of the qualities that we’re looking for. I’m excited to see what this looks like for him during training camp. I think when you get into Year 2, Year 3, there’s a sense of urgency – which he has, you can see that – to earn a role or a bigger role. He’s definitely working towards that; but he knows there will be competition there and the best man will win.”

Based on their respective track records, Skura still has a better chance at winning the job. His ability to block isn’t in question, only his ability to snap the football. That can be improved. Deiter, on the other hand, hasn’t shown he can block at a high level in the NFL. He’ll have a chance to prove himself this season, going up against a very strong defensive tackle rotation in training camp. If he can’t win the job, then he’ll likely be acting as a reserve.

The biggest experience gap is between these two players. McCourty is a 34-year old, 12-year veteran in the NFL. Holland is a 21-year old, promising rookie out of Oregon. What makes this even more interesting is the ironic role reversal. McCourty may have a lot more NFL experience, but this will be his first season playing safety. At least, it seems he’ll be playing safety. For the first time in his career, McCourty is listed as a defensive back, not a cornerback. That implies he’ll be practicing at both spots.

As for Holland, he spent most of his time in college as a slot cornerback, but had excellent snaps at free safety. In many ways, Holland has the same capabilities as former Miami Dolphins DB Minkah Fitzpatrick. With any luck, he won’t be as opposed to playing where the coaching staff wants to use him. His disadvantage is more traditional. As a rookie, he isn’t yet accustomed to the increased speed and skill level of the NFL. He has to overcome that learning curve first.

If there was one player in this class that best exemplifies Brian Flores' defensive ideology, it's Jevon Holland.

In 2 words, versatile and reliable. Can man up WRs or TEs in the slot, drop into zone, and offers better run defense than either Miami safety.

This battle boils down to who can adapt to their new roles faster. McCourty has never played safety, but he knows what the NFL demands from him. Not only that, he offers a veteran voice in the locker room and can fill the void left by Bobby McCain in helping direct the defense. That leadership factor can’t be overlooked.

Holland on the other hand is a natural fit for the position. He has remarkable instincts, athleticism, and already has plenty of experience playing safety. All he has to do is show he has a grasp on the defense and that he can keep up with NFL talent, and he can win the job.