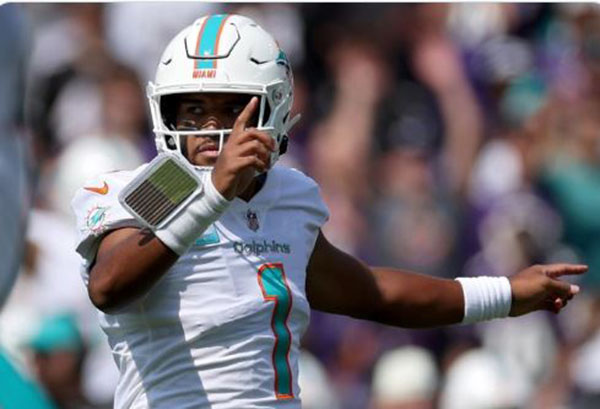 But after Tua Tagovailoa threw for 469 yards and a Dolphins-record-tying six touchdowns, including two each to Tyreek Hill (190 yards) and Jaylen Waddle (171 yards), there is reason to look ahead with hope.

Like to next week when Josh Allen and the Buffalo Bills come to South Florida.

Tua and his speedy band of playmakers showed the tangible promise of Mike McDaniel’s offense. And you’ve gotta love this unconventional young coach, who doesn’t bat an eye in going for it on fourth-and-short in his own territory in the first half — and makes it.

Still not quite sure I believe what we just witnessed.

Down by three touchdowns to what for three quarters looked like a thoroughly superior Ravens team, much-maligned Tagovailoa fired four touchdown passes in the fourth quarter for the most outrageous of comebacks. On the road.

It was the first time in 12 years any NFL team has overcome a 21-point deficit in the fourth quarter, according to ESPN Stats & Info.

The only similar in Dolphins memory was that wild comeback against the Chargers in the 1981 playoffs. Yes, ancient history. Except instead of losing at the end, the Dolphins won this time on Tagovailoa’s sixth touchdown pass of the day with 14 seconds left.

For a regular-season victory, only the 1985 upset of the Bears comes to mind as more impactful than this baffler in Baltimore.

Consider, they won despite allowing Lamar Jackson to throw a 75-yard touchdown pass and run 79 yards for another. They also spotted the Ravens seven points on a 103-yard return of the opening kickoff.

It would have been easy to throw in the towel, down 28-7 at the half. Admit it, at that point you’re thinking, “Same-old Dolphins. Still can’t match up with the better teams. Just not good enough.”

That’s what I was thinking.

Tagovailoa had thrown two interceptions. The defense had offered little resistance except for the valiant goal-line stop at the beginning of the second quarter — that sure loomed large at the end.

Still, nobody could have foreseen the fireworks that would come in the fourth quarter. The Dolphins haven’t had a cast pile up points like this since Dan Marino was letting it fly to the Marks Brothers, Clayton and Duper.

Per @ESPNstatsinfo: “This is the first time the Dolphins have had two 150-plus yard receivers in the same game since Clayton and Duper in 1986.”

On Sunday, Tua was slinging a heaping portion of shut-the-F-up to his detractors. While Hill and Waddle each had 11 catches, Tagovailoa had completions to 10 different receivers.

Concerns? Yes, these Dolphins have plenty of flaws. The big deficit was a combination of porous pass defense, a nonexistent pass rush, a special teams disaster and shaky decision making by Tua in the first half.

Leading a 28-point fourth-quarter rally changes everything for Tua. Rest assured, the quarterback has the complete confidence of his locker room now.

Tua left no doubt today. He can lead this Dolphins Team to the promise land. Period.

That won’t make next week’s challenge any easier. The Bills are rightfully regarded as a Super Bowl contender.

But if this Dolphins offense can win a high-scoring affair against Jackson and the Ravens, no reason they can’t give Allen and the Bills a run for the AFC East.

As for Dolfans, you’ve seen your team pull off the nearly impossible. Maybe they can do it again — or something like it.

For the moment, just enjoy it.

In sports, for the rich, the rules don’t always apply