Blake James walked off the field in Tallahassee, the victim of his own hubris, the physical manifestation of the University of Miami’s collective lack of ambition.

The Hurricanes’ original sin was the overreaction to the Nevin Shapiro scandal. That reporting and the subsequent uninformed, hysterical media coverage resulted in a series of panicky, ill-advised moves that set the tone for a decade of futility.

The program had gone through several years of struggle at that time (following the 2010 season), so it did not mark the point where the school stopped winning.

What the scandal did, instead, was of far greater consequence, setting in course a series of events that still haunt this school today.

That moment was the moment when Miami stopped believing in the Dream of Miami.

This was a program that was built on hubris, bravado, and unwavering belief in self combined with talent and an unquenchable thirst for excellence.

In 2010, the Miami Hurricanes went 7-5, losing the final game to South Florida in overtime. Randy Shannon was dismissed. 7-5 is fine at some schools, but this is Miami, and at Miami you win championships.

That offseason, the Shapiro Scandal happened.

In 2011, Miami finished 6-6. In the final game of the season, as the Hurricanes were getting throttled at home by a (at the time 3-8) 4-8 Boston College team, they announced a contract extension for Al Golden, adding on to an existing contract that cumulatively kept him employed until February 2021.

In one year, the standard went from 7-5 being fireable to 6-6 being extension worthy. From there, it was a downward slope into the abyss.

That was the shift, away from a relentless pursuit of winning, and toward status quo maintenance.

How does someone unqualified become Athletic Director?

How did the person in charge of ticket sales all of a sudden find himself running the Athletic Department?

Simple. By 2013, the Goldenization of Miami Athletics was complete. The focus had shifted from winning to excuse making, from championship results to mediocrity.

Remember the cloud? What exactly was that again? The school was so high on their own supply that when Miami was essentially cleared of wrongdoing with only minor penalties as a result of the Shapiro scandal, Golden hilariously claimed, with full support of the administration, that the week in which they were cleared was so challenging that they almost lost to a poor Wake Forest team.

After Shawn Eichorst left for Nebraska, James was chosen to be Interim Athletic Director, satisfying the main criteria of being the first person Donna Shalala saw when she walked into the Hecht Athletic Center. And it was that decision that would lead to nearly a decade of half-baked, cynical, expenditure cutting moves that saw Miami languish as one of the worst athletic programs in the ACC.

Blake James was not a likely choice to lead an athletic department, but he was a convenient vehicle for what Miami’s administrators new priorities were. Manny Diaz famously started calling the program “The New Miami” but in reality “The New Miami” started with the hiring of Blake James.

His hiring was the shift away from an athletic department and towards a marketing scheme, intent on convincing the public at-large that winning was priority one while behind-the-scenes the dedication was to cost control. The decision was made that on balance, rather than the risk spending big and perhaps still not winning big, it was preferable to run things on the cheap, knowing that doing so would all but eliminate the possibility of winning.

James was the willing face of this strategy, the alleged great fundraiser who never seemed to have the ability or will to spend the money he was purportedly so brilliant at raising. He was so committed to perpetuating this status quo fraud on the South Florida community that he tried to keep Al Golden employed after Clemson’s 58-0 devastation of Golden’s Hurricanes, only to be forced to backtrack 24 hours later. That was a bridge too far. Not the idea that he would keep Al Golden forever, which was his desire. But he couldn’t sell that concept publicly and keep the delusion going, so Golden went.

We can point to the absurdity of the Manny Diaz hire as the final, massive blunder that eventually lead to Blake James’ downfall, but ironically, it was the one thing he “did” right that set those wheels in motion.

Georgia’s firing of Mark Richt meant there was a well-qualified, alum of the school that was willing to take the job. And with someone like Richt at the helm, the administration’s lack of ambition became a footnote.

When Miami needed money for the Indoor Practice Facility, Richt donated a million dollars from his own salary. He did not need the money having made so much at Georgia. And on the field, in 3 seasons, he had the Canes only 10-win season since 2003 and their only bowl win since 2006. While his final season wasn’t the best, he laid a foundation upon which a competent coach would have expanded the program.

And when Richt retired at the end of the 2018 season, he gave his Alma Mater one last gift. He did not take the money he was contractually entitled to.

So here was Blake James, with a bankroll, and a program that was overall healthy. He could have hired anyone. So what does someone who is in a station well above his ability, handed an opportunity that should never have come his way, do when presented with this gift?

He pays it forward, of course. Without conducting a head coaching search, James ran to Manny Diaz, and in 6 hours, Diaz was Miami’s head coach, and along with James, cut a fitting pair of unqualified, inexplicably hired people doubling down on Miami’s plan to maintain their low cost, mediocre approach.

Was it because he is that poor an evaluator of coaches that he didn’t realize Diaz did not have the demeanor, experience, or disposition to take on the monumental task of building upon Richt’s Foundation?

Was it because he was cheaper than a more qualified coach would have been?

Was it because he knew Diaz was someone that would not rock the boat?

Surely it wasn’t because Diaz laid out a firm, convincing vision for how he planned to return the program to a nationally competitive level, since the hiring process was so rushed that there was no time for that.

Whatever the reason, it was the final act of incompetence for Blake James. Sometimes, occasionally, unqualified people can sustain and even thrive by employing inside-the-box thinking. Best practices and standards developed over time by trailblazers can be borrowed by followers, much like the difference between a chef and a cook, with the chef inventing the recipe, and innovating, and the cook following the recipe.

The market had spoken, the box so to speak. Manny Diaz’s level was Temple. Had James stayed inside-the-box and just hired any coach that a major program would have hired, he would probably still be employed despite his shortcoming.

But small thinking leads to small decisions, and he zigged when everyone else would have zagged, choosing to pay a buyout to bring back Miami’s unqualified, former defensive coordinator. Thinking outside the box is for qualified people, and James needed the box.

At that point, the clock was ticking because in addition to a disastrous hire, Richt had raised the bar. There was no longer any patience for prolonged mediocrity. 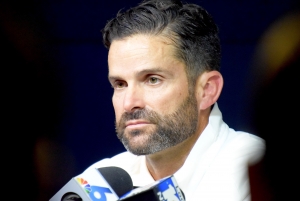 Finally, after years of intentional indifference, the house of cards collapsed this week.

A loss to the worst Florida State team anyone can remember was the symbolic end, but the die had been cast long before that. This was an athletic program, far beyond football, that was not only struggling but was aimless.

Miami’s athletics had no soul. It was just there, existing, with no goals, no ambition. A car stuck in neutral, trying to convince us that they were in 6th gear, one time actually using the slogan “Full Speed Ahead.”

And as the life was slowly squeezed out of Hecht, it was suicide, not murder. It wasn’t a scandal, it wasn’t the pandemic, it wasn’t external forces plaguing the school, it was an intentional strategy designed to spend as little money as possible to make the mendacious slogans viable, to traffic in hope.

In Miami, we’re familiar with scams, and this one finally came to end on Monday.

After a decade of small-time thinking, Miami is finally choosing to break status quo, to not settle for what is, but to focus on what could and should be.

And for a dejected, dormant, yet still prideful community, it was a change a long time coming.

Tyler Herro’s 3rd Year Leap Is Real and Its Spectacular