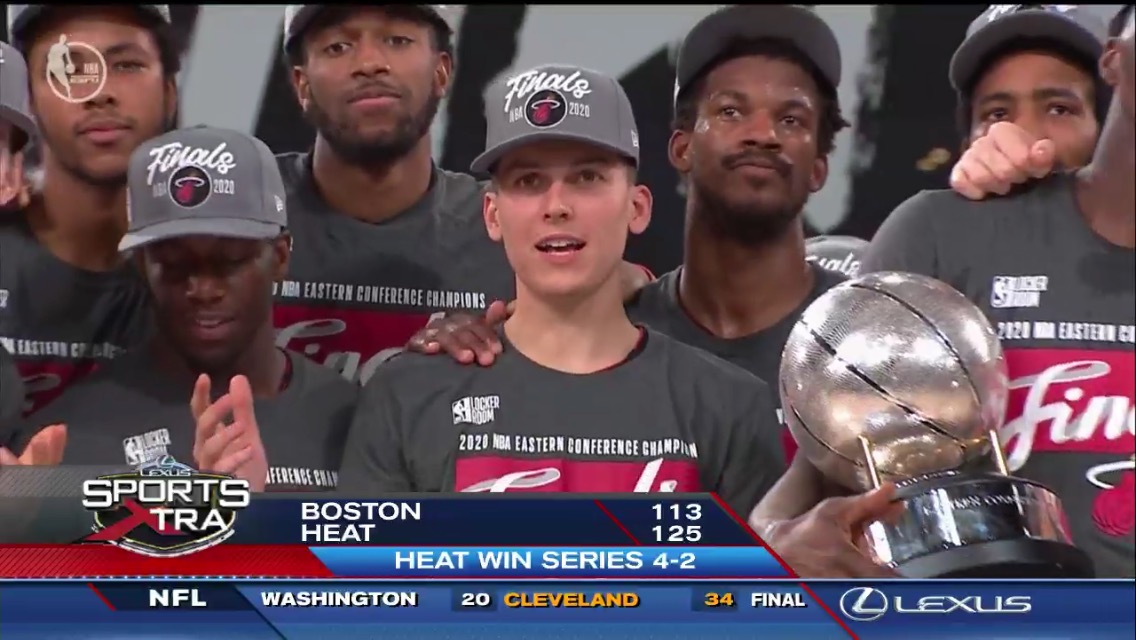 I’m over the moon as I type this. And I admit, I started this piece at the commencement of Game 5 and had to hold on to it since. There were even moments tonight where I thought that I would have to hang onto it for another couple days.

But I write this not because the Miami Heat are in the NBA Finals. It feels surreal to see that typed on my screen. We beat a team in the Boston Celtics that many national folks had penciled in as representing the Eastern Conference against the West. Best of all, we beat perennial Heat hater Paul Pierce. That is most certainly the cherry on top, the extra clams in my chowdah.

I write this not because this team has exceeded all of our expectations (the second round of the playoffs was universally regarded as their ceiling). This was supposed to be the table-setting year for when we would be cap flexible in 2021 (check), working on raising the skill level of our young players (check), and showing all free agents and interested superstars contractually bound but not really contractually bound (wink, wink) that this is an organization to be a part of.

But I am going to take a pause on all of this celebration because the Five On The Floor podcast will do all the breaking down and celebrating. Readers please make sure you check it out.

Truthfully, I write this for a different reason. I want to focus on appreciation.

Regardless of the outcome of this unique season, don’t just savor this run, Heat fans. We need to savor and appreciate this entire organization. It is the organization’s collective will, spirit, and mindset that has the Miami Heat relevant and compelling. I’ll be plain: this goes way beyond getting the right players and drawing up the right plays.

When the national media and various pundits scoff at “culture”, we embrace it. Dudes, it is a thing! The whole We-Aren’t-For-Everybody-And-Everybody-Isn’t-For-Us attitude gives us a swagger but ultimately it’s a credo that really should be etched in the hardwood of the practice gym because it speaks truth. It sets a bar and an expectation right from the jump. It’s a way to weed out those who just aren’t cut from this red and black cloth.

I’ve been drinking the Kool-Aid since 1988 and been doing Kool-Aid keg-stands since 1995. Since Pat Riley landed Alonzo Mourning I have pledged absolute fealty to the Armani-clad Don. Let’s not lose sight of what the appropriately named Winner Within has created here from the front office to the players and everything in between.

This front office has managed to both acquire and jettison players and contracts thought to be unattainable and universally accepted as indisposable, respectively. I touched on some of it in a previous post I wrote.

I half-heartedly joke when I say that Riley should do a Masterclass seminar of some kind but wouldn’t you pay to watch it?

So why am I feeling this way? Other than as a father who is able to enjoy watching a championship run with his son, I have my own personal history driving me.

I have been a fan of the Miami Dolphins since 1983. I grew up on Dan Marino. He was everything.

Like many Dolphins fans, I would be apoplectic after each loss. Sure we had winning seasons. Yes, we would be one of a small handful of teams who made the playoffs. Not many would reach a conference championship game. But it was insatiable and I could be insufferable. We had Dan Marino while others had something called a Billy Joe Tolliver and yet I was blind to it.

It wasn’t until Marino retired in 1999 and the Dolphins since that time churned through more quarterbacks in the starting position than cabinet members in the current administration’s White House did I appreciate what no. 13 actually brought. He brought stability.

We never had to worry about the quarterback position and with Tua Tagovailoa on board we will hopefully never have to for the foreseeable future.

Heat fans, we cannot let the same happen with this organization and take them for granted. Let’s take a pause from our frenzied celebration to toast this Miami Heat culture, this Miami Heat organization. Let us savor what we have in front of us. Let us recognize that we are blessed to not be the Kings, Hawks, or Hornets. Let’s even take an extended knee, look skyward, and thank someone upstairs that we are not the Knicks.

This organization from top to bottom has us poised to consistently contend and be in many meetings with top tier free agents. We are one of a handful of teams whose calls get answered and who get invited into the exclusive after party. Yes, we will have some off years. But hey, Robert De Niro is a phenomenal actor but when he said, “Yes” to the live adaptation of The Adventures of Rocky & Bullwinkle, did that take any shine off of Taxi Driver or Goodfellas? That’s a resounding, “No”.

So yeah, I’ll take our batting average as well.

We have found a formula that starts at the top and spreads throughout. Those aforementioned teams have been testing recipes for years and they still can’t get it right. They see a cavalcade of people sitting in front office positions or leading the players from the bench and nothing has changed. Us? We can take a down year or two because we know that around the corner and just beyond the horizon we’ll be back in the game. We take one step back but then several leaps forward.

Fandom is such that we will often focus on how a ball failed to bounce our way, what horrible call was made or missed, or what untimely injury befell and derailed a promising season. Or we will use our own sport intelligence to dissect a game and second-guess coaching. This will never go away. In fact, I’m betting that the emotions on Heat Twitter will be swinging wildly! Heat fans, let’s not be us.

Success can be fleeting. It can go as quickly as it came. But with this team, this culture, and this organization, the great times eclipse the lean times such as the post-Shaq, pre-LeBron period. I’m sure we will have many more of those during our lifetimes. As I said previously, I’ll put my money on this Miami Heat culture.

After all, the Miami Heat are the hardest working, best conditioned, most professional, unselfish, toughest, meanest, nastiest team in the NBA.

A Night of Magic in the Magic City