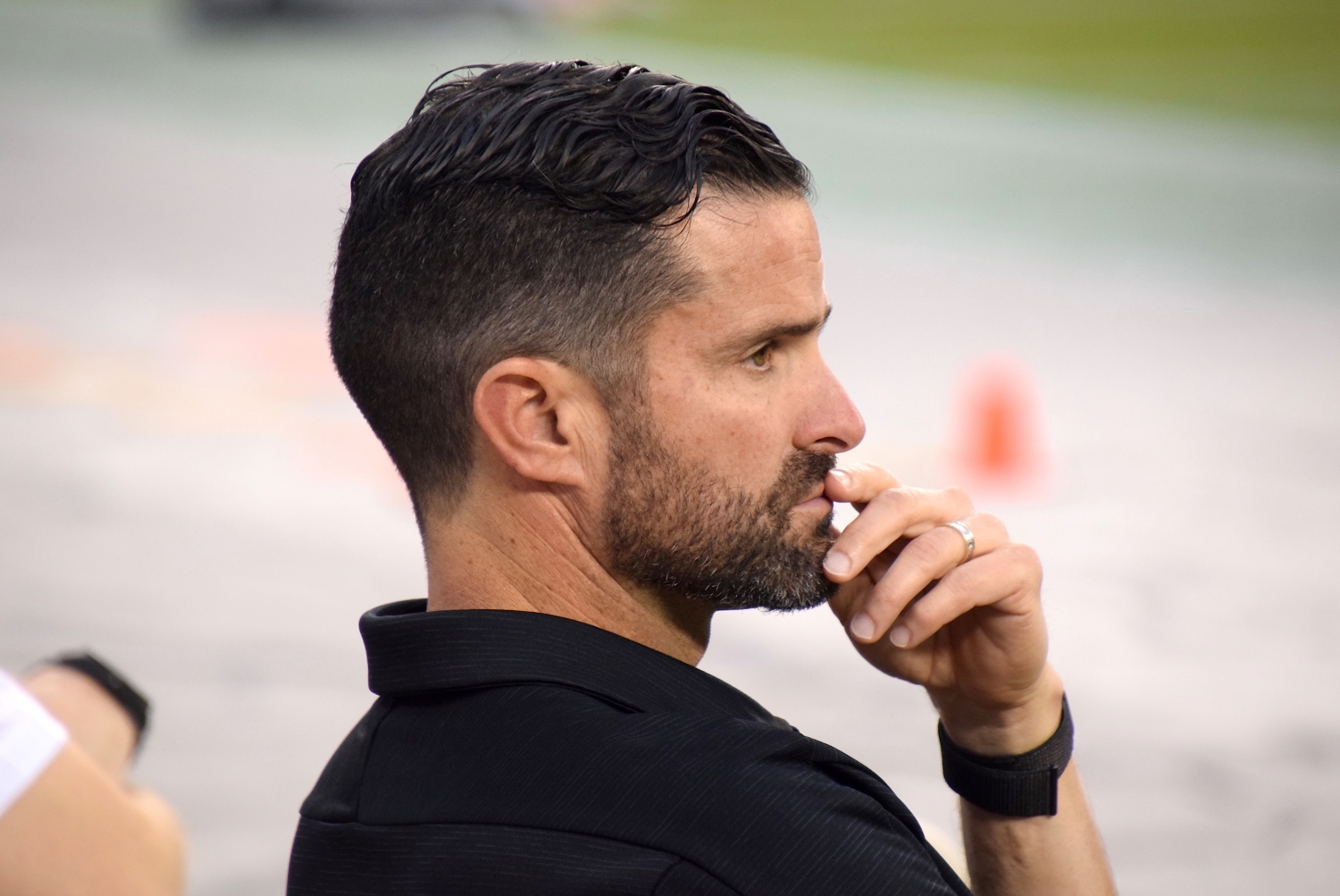 It’s been an arduous season for the Canes. It started with 2 losses, then an “easy” 5-game home stand that featured 2 losses and a close win against Central Michigan, followed by a brief resurgence mid-year, and then a complete and inexplicable collapse over a final 3-game stretch that included losses to FIU, Duke, and Louisiana Tech.

Perhaps it is a sign of the times that not only was there no reaction from the Athletic Department as The New Miami quickly devolved into a disaster, including an embarrassing loss to FIU, but that no reaction was expected. This is the new normal. No loss too shocking. We keep saying we’ve reached “Rock Bottom” but in reality, there is no bottom for this program, because it is a program devoid of standards.

Sure enough, after the failure against Louisiana Tech, Blake James released a non-statement:

Putting the substance aside, there is something shocking here that is not evident until you look back a year:

Nothing represents the apathy of this administration more than this. Copying and pasting a “well, that sucked” message from last year and “changing it up a little” is pathetic. I’m sure they want to win, but they appear to be more concerned with controlling the narrative and saying what they think they should say to show they care, then with actually making hard decisions and holding people accountable. That it mirrored last year’s statement shows a complete lack of seriousness.

Manny Diaz was hired precisely because his hiring would not result in a complete overhaul since the team was “close.” That entire rationale turned out to be dead wrong. Diaz was not ready to be the head coach at Miami, he made a million mistakes, and instead of taking the program from “almost there, but needs offensive help” to “there,” he took it to “needs a complete rebuild.” He lost to GT, FIU, Duke, and Louisiana Tech.

Now, maybe the school overestimated the health of the program. Maybe it wasn’t a few offensive tweaks away. But that’s irrelevant now. The bottom line is the job that Diaz was hired to do either (1) never existed or (2) doesn’t exist now because he destroyed it.

To pretend like this was even within the realm of their wildest nightmares when they hired Diaz is disingenuous. There is no way they hire Diaz if they could go back a year knowing what they know now. Diaz is now tasked with a job that he was not hired to do, a complete rebuild of the program.

The Culture and the Standard

One of the ironies of this season as it devolved into failure was Diaz commenting on the culture of the program. Who allowed a WR that quit on his team last year to come back, only to have to suspend him again? Who rode in a yacht? Who crashed another coach’s clinic? Who said 7-5 is unacceptable and then started making excuses for losses? Who invented the Turnover Chain and Touchdown Rings? This is Manny Diaz’s culture, and his complete lack of self-awareness about his central role in creating the culture he now decries is galling.

But the Athletic Department shares the most culpability for the current state of affairs. As much as we were all happy to hear that Dan Enos was going to be coaching his last game in the Independence Bowl, who in the hell leaked that a few hours before kickoff?

Likewise, who is feeding crap to Barry Jackson trashing players, talking about who needs to be shoved out of the program and how they need grad transfers to fix the program? Even if it is true, that stuff should actually be part of the “full assessment” and done behind closed doors. Using the media as a proxy to get messages out to pretend they care, often to the detriment of players, while the paid professionals have little to no accountability must stop. You cannot run a program where the second something goes wrong, everyone goes leaking to the press, publicly assigning blame to scapegoats.

The truth is that this is a program that has been resting on the accomplishments of those that built this program decades ago, trying to do just enough to not get screamed at by fans, with little regard for the standard which they purport to try to “get back” to.

But the only way “back” is to actually accept their culpability in how we arrived here. The standard is no longer about winning championships, because Blake James changed the standard.

The second James accepted all of that, there was a new “standard.” He lowered our standards, and lowered them to the point that he actually has a canned “we just stunk in a bowl game after winning fewer games than expected” press release. That is the definition of the standard.

So when Blake James talks about the standard, I frankly have no idea what the bleep he is talking about because he has been a senior member of the Athletic Department for almost a decade, including AD for most of that time, and it’s pretty clear that this year’s performance is perfectly acceptable to him since he has accepted it from multiple coaches.

So, do we give up? As negative as I’ve been, the answer is no.

Should Diaz have been stolen back from Temple as a first time head coach? Should he retain his job now? Irrelevant, because those decisions have already been made.

The question we’re now faced with is whether Diaz can change. And in this, we have no evidence that he cannot, which means there is reason for hope.

Blake James was not wrong in stating that there needs to be a “full assessment” of the football program. But what does that look like? Diaz needs to account for everything that happened from the second he accepted the job to the second the Louisiana Tech game ended. Work through what worked, what didn’t, why it didn’t work, and most importantly, what he is going to do differently.

A lot of this will be hard on Diaz, in particular as he looks at his own missteps, some of which were quite public and extremely embarrassing in hindsight. He chose to coach at the University of Miami not because it is easy, but because it is hard.

It’s time for him to do the hard work of creating the culture and standard that the hashtags pretend to care about.

Yes, assistant coaches will change, but everything Diaz does sets the tone for the program. When he came in and fired the entire offensive staff, he sent a message that the offense was the only problem. That’s fine for a defensive coordinator, it’s not fine for a head coach. His hiring of Enos was a classic first time head coaching mistake where he brought someone in that thought he was smarter than everyone else on the staff and should be the head coach himself (see Shannon-Whipple for previous examples).

You win and lose as a team and everyone has to be under no illusion of who is in charge, and that’s Manny Diaz. So, as he assembles his 2.0 staff, a lot of attention needs to be paid to chemistry across the offense and defense. How does the collective staff work together? Are they marching to the beat of the same drum? Does every coach understand his responsibilities and that Manny is calling the shots? And under no circumstances does anyone, ever, publicly criticize a player. If the staff is cohesive, if they actually like working together, the program becomes a much more enjoyable place to be, and the players have a better chance of success.

These lessons were paid for in embarrassing losses, but if they were learned, and if they are grown from, Manny Diaz can steer this ship back on track. He has the opportunity in front of him. But he must demand perfection from himself, from those around him, from those working from him, and ultimately, from his boss. Reset the standard, learn from this year’s false start, and move forward from there. Anything else will ultimately result in failure.

If you asked me a year ago if Gino DiMare would have the Canes as a Top 5, National Championship contender, I would have said no. Maybe Diaz can surprise us. I choose to believe that Diaz can accomplish this not because he has shown he can, but because, possibly in my own naivety, I still believe in the ability of anyone, in particular someone new to a role, to change and to grow from mistakes. The speed and nature of that growth will ultimately determine whether this year was a series of rookie mistakes on the way to ultimate greatness or a series of red flags that ultimately lead to failure.