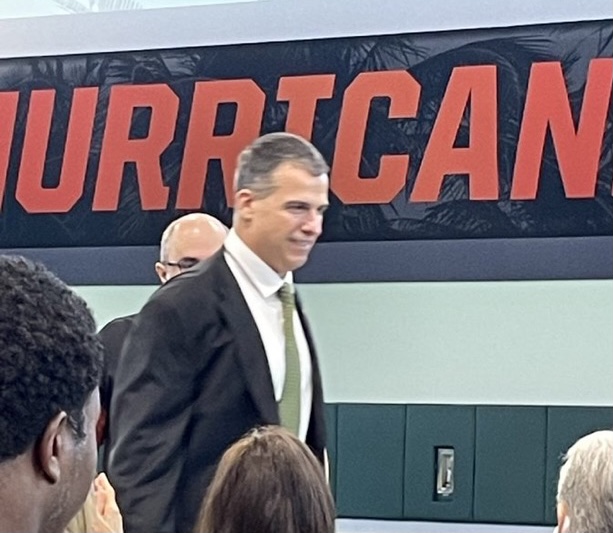 It’s been 18 years since Miami won a major (at that time BCS) bowl game. And other than a minor blip in 2017, the program has largely not been in the national title conversation. Generally speaking a Renaissance of once proud programs is greeted with eager zeal. Who doesn’t want to see traditional powers rise from the depths of despair?

The problem is there is nothing traditional about Miami.

If you were wondering if the national media had softened on Miami in their absence from the national stage, the last several weeks should have reminded you that for all of the carnival barking about Miami being irrelevant, they are always in the national consciousness.

When the Mario Cristobal rumors started, Miami fans were repeatedly told that Miami couldn’t afford him. Now, while it is true in the past that Miami was unwilling to pay coaches, they always could pay coaches. It was a choice.

That fallacy, that Miami could not pay for coaches, lead the national media to spend a week spinning themselves into a frenzy in an attempt to discredit Miami as a worthy entity.

We’re Going to Have to Order Dramamine in Bulk

The week started with everyone making fun of Miami. “Why would Mario Cristobal leave Oregon with Nike money to come to Miami?”

Tired tropes about facilities (which have recently been upgraded) and lack of money (which the school committed to spending, finally) were trotted out.

In Miami, people were confident. I’d say say quietly confident, but we don’t do anything quietly in Miami. We understand the draw of this place, why it is special, and we’ll tell you about it.

When it became clear that the money would be there and that Cristobal would consider coming to Miami, his qualifications were attacked.

I have a serious question – has anyone at Miami watched Oregon over the past few years? I know he’s from there. I know he will recruit. But…the product isn’t that impressive https://t.co/Le98aqQLFR

Keep in mind these are the same people that will defend the atrociousness that was Manny Diaz football. But Cristobal winning the Pac 12 twice, the Pac 12 North 3 times, and a Rose Bowl is not “that impressive.”

That “Mario isn’t good” angle was never serious and gained no traction. Oregon and Miami actively fighting over a coach is surely a sign that he is good.

Next target? The process.

The school is being mean to Manny Diaz. If they want to hire a new coach, fire the old one first. This break with decorum is now behind only Pearl Harbor and 9/11  in terms of crimes committed against this nation in the last 100 years. My favorite was this:

If true, this is the most disrespectful and dysfunctional leadership I’ve seen. You’ve got coaches on the road selling YOUR university! Total embarrassment! Drop a set, call the man in, keep him or fire him, but don’t conduct business in such a dishonorable manner.
Geez… https://t.co/wsSjjmylXe

Gene Chizik, who has a list of moral ambiguities a mile long, and once resigned as Defensive Coordinator at UNC a week after National Signing Day, has problems with Miami’s process. Miami is dishonorable for continuing to pay Diaz while looking for a replacement. In a business where Brian Kelly lied to a recruit as he accepted the LSU job during an in-home visit, this is a bridge too far.

Manny Diaz tapped into this line of thinking in his farewell statement. He was aggrieved here. Let’s see what Temple players have to think…

You convinced 17 “real people” to honor their commitments and sign early for you only to disappear on them 2 weeks later and let them find out via Twitter. https://t.co/NnwgUFbq6Z

Oh yes, that’s right. He sold out Temple’s players during a comical 15-day tenure. Miami should have fired Diaz after the FIU game in 2019 for performance. But keeping him employed, under contract, while they found his replacement? While unorthodox, that is hardly the crime that it is being portrayed as.

I’m beginning to think College Football is a dirty business and all the national media lobbing moralistic grenades at Miami profit from this same business.

But after that lost steam, they went in for the kill as sports writers somehow became experts in healthcare.

Miami is reportedly using medical profits to hire a new football coach, which made the internet properly irate

Now, keep in mind the report was that Miami had made money off the UHealth system. The fact that the money going into the football program was being paid for by independent, billionaire boosters WAS IN THE SAME SENTENCE AS THE UHEALTH BLURB.

But nope, we’re going to ignore that, and the part about how those boosters were the ones funding this venture (again, in the same sentence) and not only assume that Miami was taking money out of the UHealth system to pay for the Athletic department, but that the profitability was due to gouging people during the pandemic.

Who knew the Venn Diagram between gas bag sports hot takers and for profit healthcare experts was a circle?

The reality is that UHealth has been a massive capital investment for the university which they lost money on for years. President Frenk, an actual healthcare expert instead of someone cosplaying as one to selectively channel outrage at Miami, was hired to clean that up and return it to profitability. That is finally happening now. What role did the pandemic play in this?

The University of Miami had a significant decline in its earnings in fiscal 2020, as the initial months of the Covid-19 pandemic impacted operations.

The nonprofit university in Coral Gables was among the most financially impacted schools because it operates a major health care system. Patient visits declined dramatically, and non-elective surgeries were temporarily halted during the beginning of the pandemic

Oops. In their zeal to try and make the money “dirty” they didn’t bother to, you know, learn anything factual.

If you’re keeping up, so far we’ve got:

The reality is the reason for this pretzel-twisting, factually incorrect, bizarre attack on Miami has nothing to do with the actions. The real crime was being Miami.

For better or worse, we are who we are. South Florida is an insular, polarizing community.

We know that, we embrace it. A lot of people hate us, and we revel in it.

With that said, South Florida is not closed off. As Cristobal said in his introductory press conference, “Once you’re a part of this community down here, you’re part of it forever.”

He gets it. Miami is more than just a school, it’s more than a brand. It represents not only the tri-county South Florida community, but it also represents the world, the “most culturally diverse, vibrant, energized, destination city in the world.”

It’s the school for those that don’t have a school. The school for the aggrieved. The misfit outcasts that society has deemed unworthy, dishonorable.

It’s the school for those who are always told they can’t accomplish things, that they’re getting too big for their britches, that they don’t deserve a seat at the table.

It’s the school for those that want to look up in the stands and see a fan base representing every shade of the rainbow. Where no one feels out of place.

You see this traveling through this country, the U being lifted at you, the telling nod, a “Go Canes” being exchanged between strangers. It’s like you’re part of a secret club that anyone can join, regardless of whether you went to college or not, regardless of where you call home. And it’s a club that once you join, it stays with you forever. As Jimmy Johnson so eloquently put it in Billy Corben’s fantastic 30 for 30 document “The U”:

The reason we lash out at those that try to spit on us in an attempt to diminish this school is because you are not just attacking a football program, you are attacking a community, a prideful cross-section of every race, religion, and nationality coming together in the South Florida sun to cheer on our local kids, hoping they will succeed and lift up our community.

They have in the past, and they will do so in the future, no matter how many times you tell us to temper expectations, to accept mediocrity.

This is more than a football program, this is our people.

The Predictable End of Manny Diaz

Mateo’s Hoop Diary: Zion, Pelicans’ Season Over Before it Start...
Scroll to top