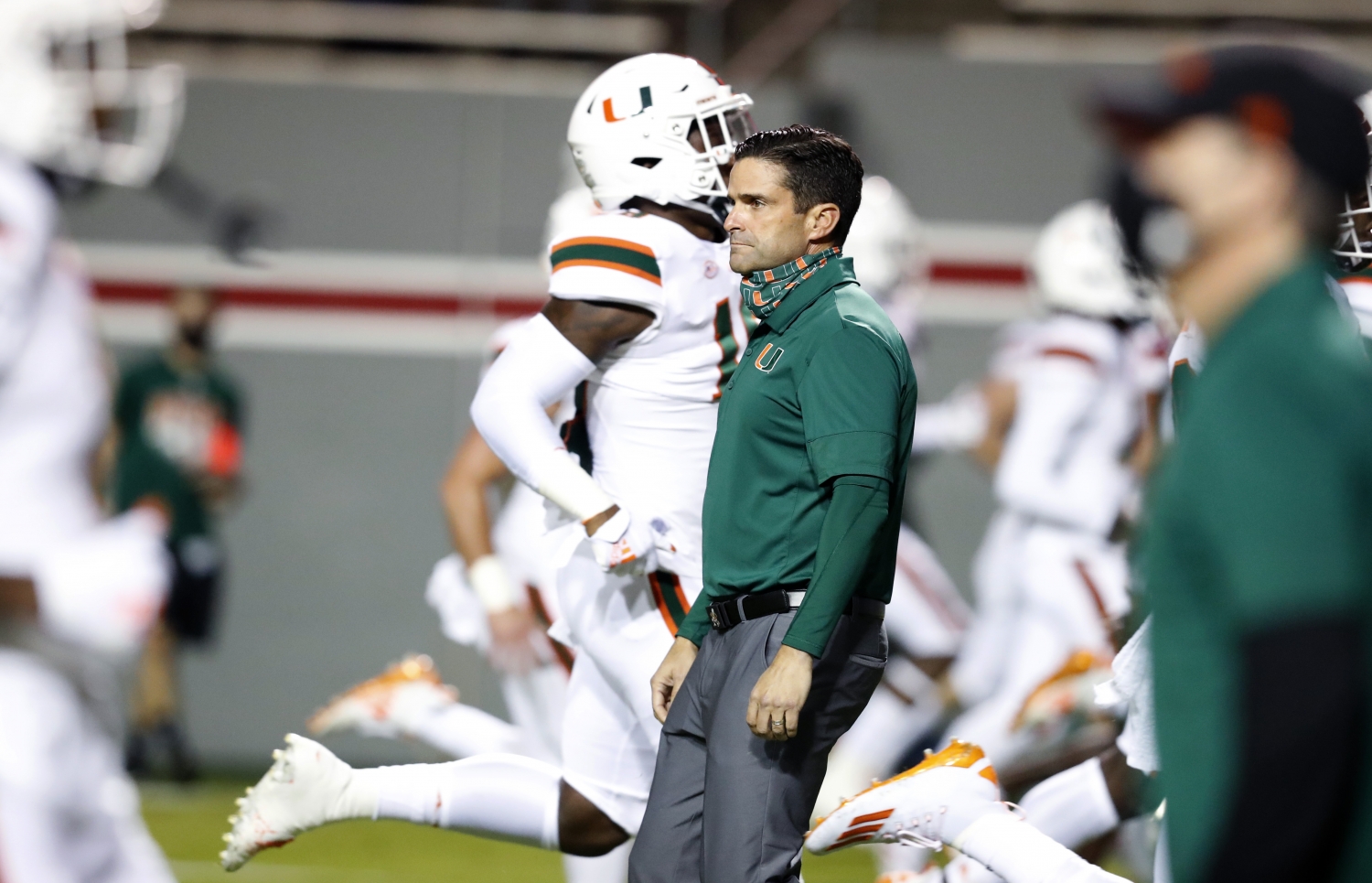 In the end, Manny Diaz left Miami the way he came in, unconventionally. The man who spent 15 days as head coach of Temple spent more than a week as Miami’s lame duck coach.

The Canes finally made the only decision they could make, letting Manny Diaz go with Mario Cristobal announced as his replacement shortly after.

For Diaz, the end was slow, excruciating, and inevitable.

An unqualified assistant coach whose level was Temple and who had already worn the fans’ patience thin as Defensive Coordinator would always have a short leash. For Diaz to succeed, he had to be serious, had to be focused, had to instill discipline, and could not waste any time. The nature of his hire, without a search, and his history of being on Miami’s previous staff, demanded quick success.

Instead, Diaz was much more concerned with media manipulation, putting on a show for social media, coining slogans, not realizing that the only way to placate fans is with the one thing he could not do, win football games.

All Hat, No Cattle

When Diaz arrived back in Miami 2 weeks after accepting the Temple job, he decided to be the player’s coach. To that end, and to the end of his tenure, the players played for him.

The problem is that Diaz failed them. He was to be the adult in the room, the person that provided the mix of comfort and discipline, raising the standard of the program, demanding excellence.

What they received, instead, was the adult trying to be “cool” and be everyone’s friend. He had a responsibility to this program as its steward, and he chose to “have fun with the guys.” I’m reminded of the episode of Saved By The Bell where Principal Belding’s “cooler” brother shows up, charms the kids, but ends up letting them down. They needed the “uncool” brother who was reliable, did the right thing, and took care of them.

Instead, Diaz came up with new jewelry (Touchdown Rings), taped 7-6 to a tackling dummy before promptly going 6-7, seemed more focused on winning social media than football games, and spun that into his inevitable downfall. No amount of being the coolest kid in the class can make up for losses.

Diaz was having the time of his life while fans suffered through some of the most abhorrent football this hallowed program has ever seen.

The football itself was atrocious, as was his record. His one “good” season involved losing a bowl game and getting blown out twice, including the most embarrassing defensive performance in school history. This is for a school that employed Mark D’Onofrio for 5 years.

For all the absurd narrative around close losses this year (conveniently ignoring that Diaz’s Canes actually made out better in close games than expected), 2020 saw a huge Canes’ 3-game winning streak in the middle of the year where they eked out one possession games. This ran Miami’s record to 8-1, before they predictably imploded. And that was Diaz at his best.

That will be the legacy of Manny Diaz football. Exciting games that ended up close because the Canes mostly superior talent kept them in games, while Diaz’s coaching and lack of preparation made sure that talent advantage was mitigated. All told, Diaz leaves Miami with a collection of several of the worst losses in school history.

He should have been fired for losing to FIU in his first year, something unimaginable. He cemented the obvious by following that loss with losses to Duke, and an unbelievable bowl loss to Louisiana Tech where the team failed to enter the red zone, let alone score. That Diaz somehow managed to keep his job for 2 more years after that is a testament as much to his political savvy, always selling that Miami would be “Next Year’s Champions,” as it was to Blake James complete lack of standards. 2 years after losing to FIU, Diaz would notch his final embarrasing loss, at rival FSU, who had lost to Jacksonville State and would fail to make a bowl game. James was fired immediately, and Diaz would follow him weeks later. The seemingly infinite tolerance had finally run out.

One of the many slogans that Diaz coined was “The New Miami.” See, he was going to fix this program by…well, he never really finished the sentence.

What was the “The New Miami”? He never articulated it because it was empty, much like his game plan after a bye week.

What actually happened is Blake James and Manny Diaz perpetuated a fraud on this community for 3 years. James hooked up his buddy, putting him in a position he had not earned without conducting anything resembling a coaching search. He then backed him through loss after loss. The fans? Not only were they of no concern, but in fact started taking the blame for poor recruiting.

The greatness of sports is that after all the talk stops, the results speak. And Diaz didn’t have the results, and the problem with the Grifter’s Alliance he formed with James is that eventually, the jig is up. You can only spin and deceive so long. We saw this with Al Golden, and now with Manny Diaz, as they kept explaining why it was not their fault that the program they were in charge of was underperforming.

Miami has been there before. We’ve seen this playbook. Fire the coach, bring another cheap hire in, sell hope, keep the new coach way past the sell by date, hire cheap again, repeat. The key to this con is everyone would be so relieved that the previous coach was gone after overstaying his welcome that any alternative would be accepted.

I’m sure James thought he could keep Diaz at least another year. He was able to retain Al Golden for a 5th season despite a 6-7 4th season that ended on a 4-game losing streak.

But he miscalculated. The community rose up, and overthrew him. Long before James was dismissed moves were being made to move on from his line of thinking. And when he went, so went Diaz’s protector. Miami decided to save Miami, and Blake James and Manny Diaz were not part of that solution.

Diaz tried to save his job, unleashing one last empty slogan, “Building Something Special.” He pumped out that narrative, ignoring the struggles with a 3-win GT team and a loss to a 5-win FSU team as 2 of his last 4 games, pushed the young player/close games narrative, and tried to rally players to his defense, but no one in power was listening anymore. You can only run a Ponzi scheme for so long.

Miami had already decided to invest in the program, go get their coach (Mario Cristobal), and give him the resources needed to build an elite staff. Diaz couldn’t help himself, with one last, blame shifting, release dripping in victimhood:

Ah yes, “Next Year’s Champions,” again. And yet, despite this, people will still say that had he received the backing Cristobal received, maybe he could have done better. The reality is that no serious program that is investing in the way that Miami has decided to finally do so would ever hire Manny Diaz as their head coach. He only got the job in the first place because the school was running on a shoestring budget.

Far from being victims, James and Diaz were collectively in charge of South Florida’s beloved football program for 3 years despite lacking the qualifications. Woe is them? No, woe is us.

Miami chose to turn the page on James and Diaz’s form of leadership, where the focus was on staying employed, keeping the grift up, and worrying more about public perception of the program than actual performance. Unfortunately for James and Diaz, a New Miami necessitated getting rid of those that came to symbolize 15 years of futility, which somehow managed to degenerate further the last 3 years.

For once, Diaz’s slogan rings true. This is “The New Miami.”  And James and Diaz will rightly play no part in it.