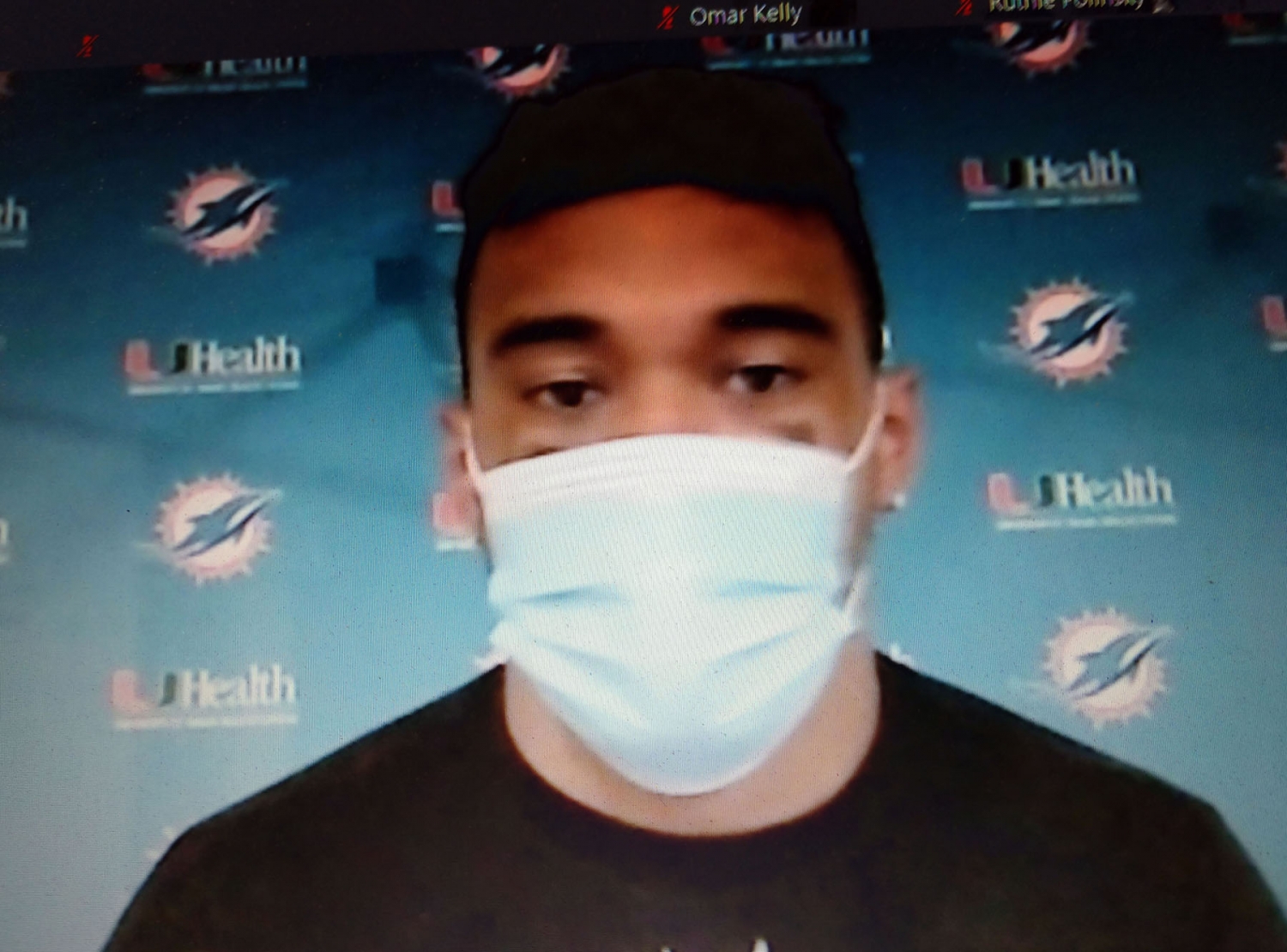 This will go down as Tua Tagovailoa’s first NFL defeat after wins in his first three starts.

Also, his first time pulled from a game for ineffectiveness.

All of which he summed up succinctly as: “It just sucks to lose.”

A lot of blame will be directed the rookie’s way in the Miami Dolphins’ 20-13 loss Sunday at Denver which ended a five-game winning streak.

But the Dolphins were beaten the old fashioned way in this one. They got soundly whipped up front.

This was a big change from what we’ve seen throughout Miami’s streak. The Broncos were too physical on the line of scrimmage. On offense and defense.

That was evident in the difference in yardage, 459 to 223, advantage Denver. And in the Broncos’ six sacks to zero for a Dolphins defense that has been so impressive in applying pressure in recent weeks.

Miami’s offensive line, featuring two rookies starting and three seeing action — rookie Solomon Kindley left with an injury and rookie Robert Hunt came in at tackle with Jesse Davis moving to guard — had its poorest game of the season.

Often Tagovailoa had no time to set up. When there was time, Tua often took too long to find a receiver. That was due in part to receivers struggling to get open — the absence of Preston Williams, on injured reserve, is apparent.

Coach Brian Flores mentioned the trifecta of inadequacies — Tagovailoa, the line and the receivers.

He made the switch at quarterback to Ryan Fitzpatrick with 10:44 remaining because, “At the end of the day we weren’t moving the ball effectively and I just felt like we needed to give ourselves a spark.”

Flores said Tagovailoa wasn’t injured (he’d been on the injury list with an undisclosed foot issue during the week). He also nipped any quarterback controversy in the bud.

Tagovailoa will start next week against the Jets. As well he should.

Without a doubt, the rookie quarterback played poorly Sunday. The Dolphins punted on six of eight possessions with Tua. The only touchdown drive was 22 yards, set up by Xavien Howard’s interception.

“I felt like I was holding the ball a little bit too long,” Tagovailoa said.

Veteran Fitzpatrick came in and provided a spark, leading the Dolphins to a field goal. Then, after Andrew Van Ginkel forced a fumble at the Miami goal line, driving the Dolphins from their own 1 to the Denver 15.

It was vintage Fitzpatrick. The ol’ gunslinger can come in and lead a dramatic comeback or he can take you to the brink and throw the interception that seals defeat.

AVG on his forced fumble at the goal-line

"i was off the edge and i came back. i saw there were a couple guys on him, i saw he was going to score. i did everything i could to get the ball out and give us a chance." https://t.co/e0ElX3xOQS

The later is what happened as Denver free safety Justin Simmons read Fitzpatrick’s intention on a post to DeVante Parker and cut across to pick it off.

It was a bad day all around for the Dolphins in Denver.

Adding to the frustration, a win would have pulled them even with the Bills atop the AFC East at 7-3. It would have been Miami’s best start in 19 years.

Sure, it’s disappointing. But it’s going to happen on the road in the NFL that a team playing well gets outplayed by one that has been struggling.

fitzpatrick:"i put us in a bunch set, DVP was on a post, safety came down on shaheen, backside safety really plays my eyes…unfortunately i didn't look him off the way i wanted to…i need to do a better job of holding that safety. that's the game of football, it's milliseconds" https://t.co/zznAqnudy3

The Broncos, now 4-6, not only outplayed the Dolphins, they outcoached them.

Broncos coach Vic Fangio is a heck of a defensive mind. His game plan appeared to confuse Tagovailoa and his defense outmuscled Miami.

Tagovailoa finished 11 of 20 for 83 yards. He still has not officially thrown an interception in the NFL. A penalty negated one Sunday.

The accuracy that Tagovailoa had shown in previous games wasn’t there. When he did look deep, he overthrew speedy Jakeem Grant three times.

His most impressive completion of the day was the three-yard fade to Parker for the only Miami touchdown in the first quarter. Tua has been very good in the red zone. But he was unable to get them there again.

Tagovailoa said the right things about his fourth-quarter benching, saying he recognized it was for the good of the team.

Flores said he isn’t concerned about how the loss and benching will affect Tua: “He’s a confident kid. … I think he’s dealt with a lot of adversity. I think he’s fine.”

Tua said he viewed it as a learning experience.

“It’s one way hearing from Fitz when I come to the sideline. … It may seem like [a receiver is] covered to you. It’s another seeing him going out there and kind of doing it.

“For me, a lot of the time I’ve seen guys were covered but they’re not necessarily cover, if that makes sense. Just being able to see a lot of what Fitz was doing when he got in … a lot of it [was] learning lessons for me.”

It was also a reality check for a Dolphins team that perhaps is not as good as it may have appeared during the winning streak.

But for perspective, it was the first loss in two months for a rebuilding team that wasn’t considered ready to compete for a playoff spot this year. And Miami remains very much in the race with winnable games the next two weeks.

Also a reminder that a rookie quarterback in his fourth NFL start, no matter how highly acclaimed, has a lot of learning to do and growing pains to go through.

It could be worse. The Cincinnati Bengals, who play the Dolphins at Hard Rock Stadium in two weeks, lost prized rookie quarterback Joe Burrow to a season-ending knee injury on Sunday.

Relegation, legitimacy, popularity: What should MLS do to grow in America?
Scroll to top