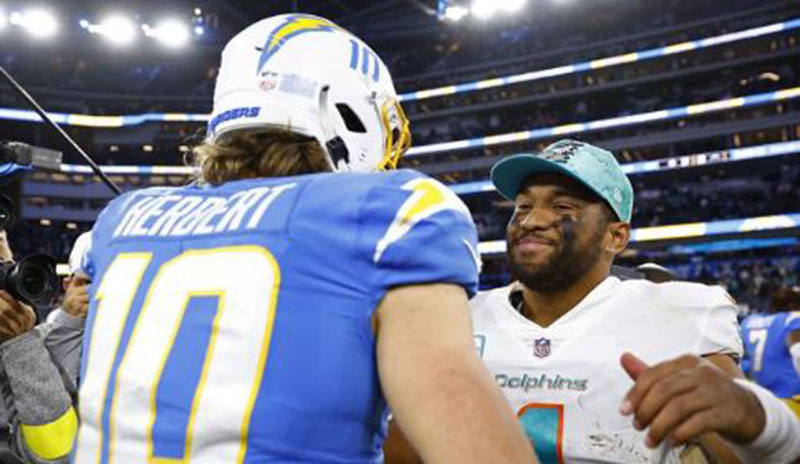 Herbert is that good. He’s been showing it since he arrived in the NFL in 2020.

The surprise was how poorly Tua Tagovailoa played for the second week in a row on the West Coast.

Once is a bad game. Twice in a row is a trend.

The 34-3 drubbing in the penultimate game of last season (Jan. 2) at Tennessee choked out playoff hope built on a seven-game winning streak, and it came against Miami’s former long-time quarterback Ryan Tannehill.

Sunday was another of those oh-so-Dolphins humiliations with Herbert, the quarterback they passed up in the 2020 draft, throwing for 367 yards while Tagovailoa had a paltry 145 yards, 35.7 completion percentage and 65.3 passer rating on another abysmal off-kilter day.

Even the NFL rubbed salt in the wound with a snarky headline on its YouTube highlights video of the game (later removed): “Justin Herbert shows Miami what they could’ve had.”

This is real by the NFL. Wild caption.

They later edited it to something else, but why are they trying to antagonize fan bases? leave it to the talking heads. pic.twitter.com/JQBIw3Qqfk

Look, it’s been clearly evident that the Dolphins left the better quarterback on the table in 2020 when they drafted Tua at No. 5 and left Herbert for the Chargers to take at No. 6.

The questions about Tua were always about Tua himself and had nothing to do with Herbert: Could he stay healthy and productive, given his injury history and stature? Could the Dolphins win with him?

There’s always been the possibility both teams could have come out of that draft with franchise-caliber quarterbacks.

Durability remains an issue, but in his third season the view of Tagovailoa was finally trending in that direction. With the Dolphins on a five-game winning streak and Tagovailoa putting up sterling numbers for accuracy, efficiency and down-field connections there were chants of M-V-P, M-V-P.

Two puzzling, off-target performances later in losses at San Francisco and L.A. have undone a lot of the headway he was making — a lot of it coming against the likes of the Lions, Bears, Browns and Texans.

The stumble against the 49ers’ league-leading defense could be shrugged off to some extent. The Chargers should have been prime for picking, though. They were missing six starters on defense, including two in the secondary. The previous week the Raiders’ Davante Adams burned them for 177 yards on eight receptions.

Chargers defensive-minded coach Brandon Staley stymied the Dolphins by throwing press coverage at the Dolphins’ speedy receivers (35 percent of the time, according to Next Gen Stats) and clogging the middle of the field that Tua and his receivers like to exploit. The Dolphins managed only 219 total yards.

Even Tyreek Hill, except for the 60-yard TD catch when Michael Davis got his feet tangled and fell, had a pedestrian receiving day. Jaylen Waddle was mostly MIA.

Dolphins rookie coach Mike McDaniel’s aura as an innovative offensive mind lost some luster Sunday. He didn’t adjust to counter the Chargers’ coverage scheme, and McDaniel’s vaunted zone-blocking running attack didn’t find any traction for the second consecutive game. He didn’t even give it much of a chance.

Now a Dolphins season that held more promise than Dolfans have seen in years is taking on the trajectory of a lead balloon.
With the chilling prospect of a snowy Saturday night in Buffalo just ahead.

A win against either the 49ers or Chargers would have given the Dolphins the chance to regain command of the AFC East with a win over the Bills. Now they are likely playing for a wild card and another tough assignment on the road.

These Dolphins have more issues than Tua’s misfires the past two weeks. The defense has been victimized by less distinguished quarterbacks than Herbert — Brock Purdy and Zach Wilson, for instance. The addition of Brandon Chubb hasn’t brought a notable improvement to a unit that has been subpar all season.

While L.A. was pressing Miami receivers, Dolphins defensive coordinator Josh Boyer opted for a weird conservative alignment just before the half with the Chargers facing third-and-goal at the Miami 17. Eight Miami defenders were spread out near the goal line, and Austin Ekeler was able to follow an escort of blockers to the 1. Ekeler scored from there on fourth down and the Chargers took a 17-7 lead at the half.

There has certainly has been a lot to question lately about this Dolphins team that seemed bound to break the mold from a painful past. Fortunes pivot quickly in the NFL.

Tagovailoa said recently that last season he questioned himself, wondering, “Do I suck?”

That would be a bit harsh now, given his overall body of work this season.

There is one way to get his season trending in the right direction again. Snowy Buffalo awaits.