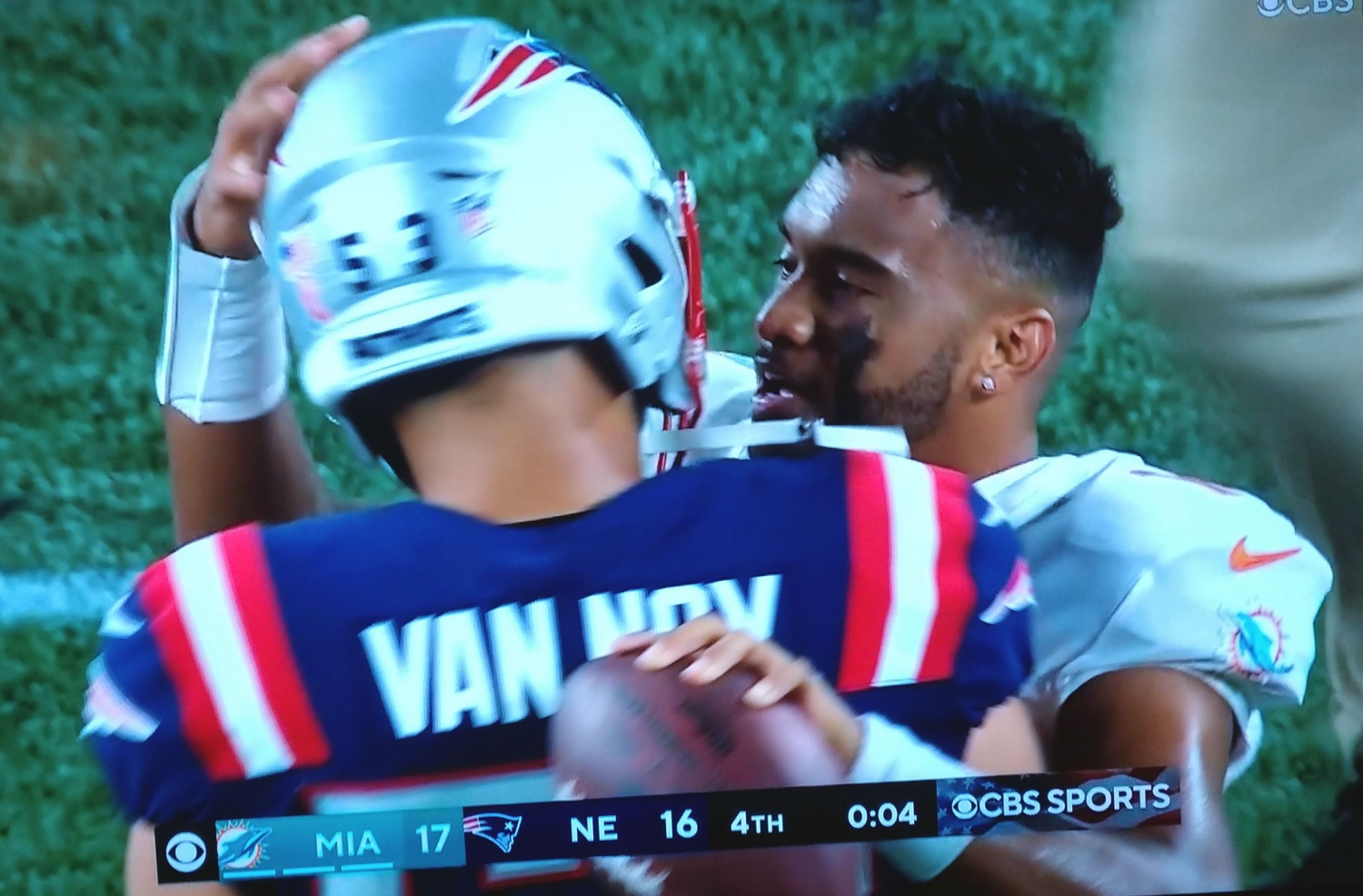 This is why the Miami Dolphins had to pay Xavien Howard and make their star cornerback happy.

Their best player saved them from a gut-wrenching loss Sunday at New England.

The Patriots avoided throwing in his direction all day. Then, with a one-point lead slipping away, Howard dislodged the ball from Damien Harris and dug it out at the Miami 9 with 3:31 remaining.

Thanks to the timely takeaway in the red zone, the Dolphins ended up with an uplifting if somewhat unlikely 17-16 victory.

It was nice to see Bill Belichick in the role of Charlie Brown with the football yanked away at the last instant, for a change.

But it was a victory to leave Dolfans feeling somewhat queasy.

Consider the Patriots’ lopsided advantage in yards gained, 393 to 259, and in time of possession by nearly 13 ½ minutes.

And that they didn’t have an answer for rookie Mac Jones, who played like a seasoned veteran in his first NFL start.

Jones led an offense that converted 11 of 16 third-down situations.

Tua Tagovailoa gets the W in the Battle of Bama quarterbacks. But Jones had the advantage. He completed 29 of 39 passes for 281 yards, a touchdown and passer rating of 102.6.

As the afternoon turned to dusk, it felt like many Dolphins-Patriots games throughout the Tom Brady era. Except it was Mac Jones playing pitch-and-catch with his receivers. Making every correct decision. Stepping up to avoid the rush or letting it go just in time — on time and on target. Time and time again.

Even though Miami held the lead most of the second half, a New England victory seemed inevitable until Howard’s heroics.

Tagovailoa wasn’t bad. He led impressive touchdown drives on the first Miami possession of each half. He capped an 80-yard drive with a three-yard keeper for the early lead. Then connected with rookie Jaylen Waddle from three yards out to end a 75-yard drive in nine plays for a 17-10 Miami lead after halftime.

Tagovailoa’s performance won’t quiet his doubters in Twitter land, though.

He ended the day 16 of 27 for 202 yards and a passer rating of 79.6. In addition to the touchdown to Waddle, he made a horrendous decision in throwing a desperation pass on the run that was picked off late in the fourth quarter.

That set up New England for a would-be winning drive until Howard intervened.

Tua would have gotten savaged on Twitter this week if that pick had cost the Dolphins the game. He still may. Not that it matters.

What does matter is that more flaws were revealed than Dolfans would have expected after a busy offseason, especially on offense. After that sublime opening drive, it was crickets from the offense for most of the rest of the half.

The Dolphins went a stretch in which they gained 17 yards over a span of 11 plays. Three consecutive possessions lasted less than a minute and a half.

Somehow tight end Mike Gesicki was targeted only twice all game and finished without a catch.

Dolphins leave much room for improvement

The offensive line still looks suspect. Pass protection was shaky and there wasn’t a lot of space for the running game.

Rookie tackle Liam Eichenberg got beaten badly for a sack and was flagged for a penalty that wiped out a gain. Guard Solomon Kindley got caught downfield on a pass, negating a first-down reception.

But credit the men up front on the final possession when they ground out the first down needed to kill the clock. Tua also had a first-down toss to DeVante Parker on that drive.

The most positive sign of the day was rookie Waddle showing evidence of the dynamic weapon envisioned when Miami selected him sixth overall in April. He finished with four catches for 61 yards, including a leaping grab for 36 yards. That made up for a bad drop on a third-down pass that killed one possession.

On the short touchdown catch, Waddle did a nice job slipping the ball inside the pylon.

Defensively, the Miami pass rush was lacking except for Emmanuel Ogbah, who looks like a monster.

Overall the defense gave a lot of ground but on three occasions made the Patriots settle for field goals after lengthy drives. They had two takeaways, extending their streak to 23 games with at least one, longest active in the NFL.

Then Xavien Howard showed why he is indispensable by making the kind of play it takes to win at New England.

Any win at Gillette Stadium is an accomplishment not to be taken lightly.

It’s always preferable to be trying to fix shortcomings coming off a win. Especially when the other three teams in the AFC East lost on Sunday.

Today was a good day pic.twitter.com/OYmjgAlLbx

Wherever he goes next, Goran Dragic should eventually reside in rafters
Scroll to top