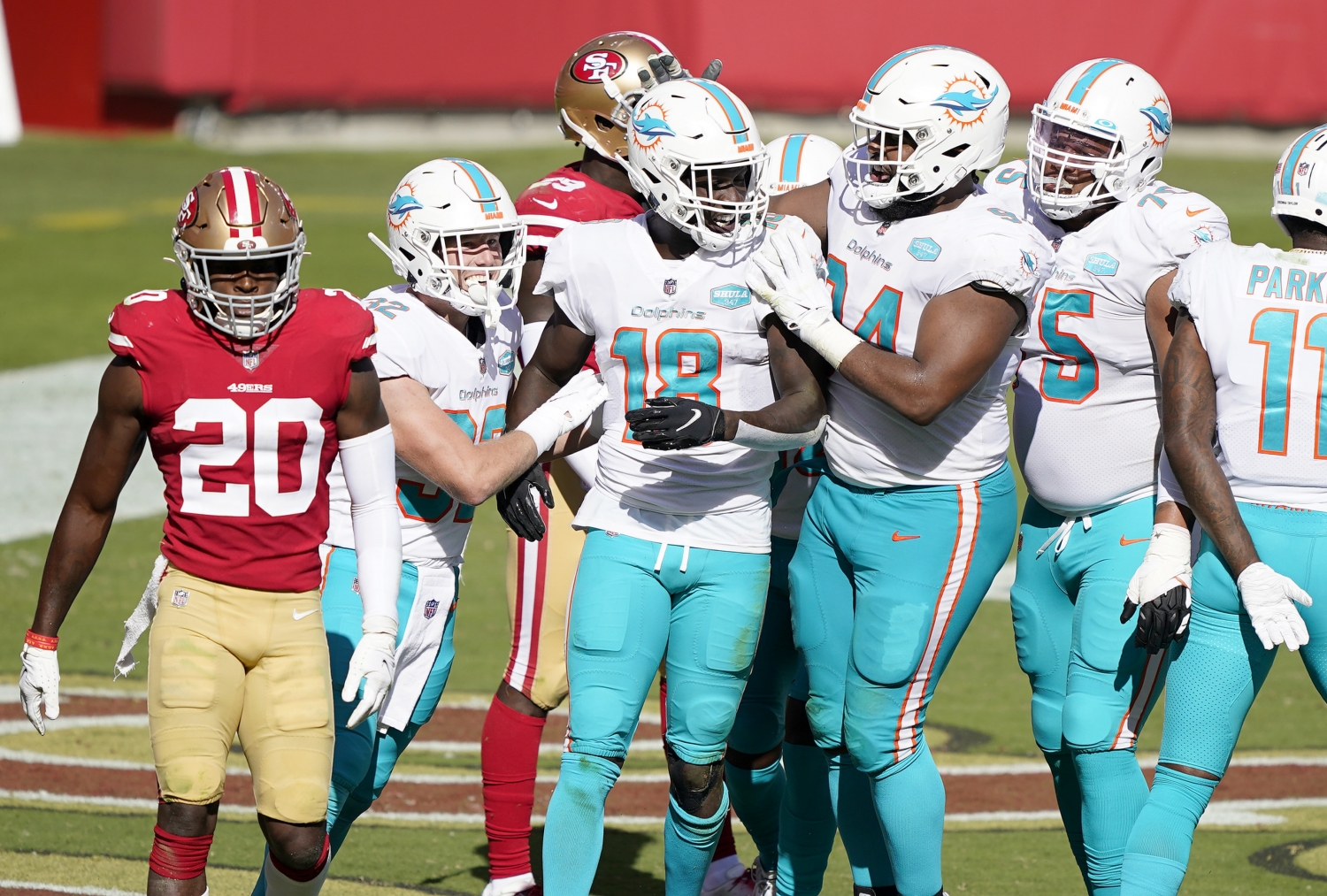 Welcome back to another installment of Stock Up Stock Down. In Week 5 of the NFL season, your Miami Dolphins came out on top against the San Francisco 49ers in a surprisingly dominant fashion with only a few things to nitpick at. We took control of the game from the first drive and did not let up throughout the game. With so much to dissect, let’s dive right in

Ryan must have a couple of burner Twitter accounts and saw all the calls for Tua to start because he came out on fire from the very first play. All last year we praised Fitz for his ability to give his receivers a chance to make plays on the ball by throwing the 50/50 balls, which he has done this year but only to Gesicki and DVP, and it was apparent starting the game with a deep shot to Preston for 47 yards and culminating with a 3 yard TD pass to Adam Shaheen.

Ryan led an efficient offense all afternoon long, finishing with not just the stats (22/28 350 yards 3 TD) but also scoring on 9 of the 12 drives the offense was on the field (1 was the final drive to kill time and in the game). Overall, because of his play, I doubt we hear anything else about Tua starting until we after we play the Jets at home in Week 6.

All season long, Fitzpatrick has shown a level of confidence in DVP and Gesicki, but this week it appears the level of trust extended to Preston and showed what it could result in. Preston, from the first play, took the extra trust and earned more with a 47-yard deep catch to start the game, and he did not let up the rest of the game leading to the first 100-yard game of his young career. He finished the afternoon with 4 catches for 106 yards and a TD in what I would call the most complete game of his career. The key here is going to continue to see this effort and attention to detail from the Unicorn because if we do, the sky is the limit for him.

Last week I placed Jason Sanders in the stock up as a slight to Flores’s inability or unwillingness to make tough decisions, but the start to the year that Jason has had is truly something to marvel at. Jason has started the year 14/14 on field goals and another 10/10 on extra points. It is a piece of mind to know that your kicker is perfect on every kick each time you send him out there.

This must be what it feels like to have a defensive-minded Head Coach because the D was flying around all afternoon long. Throughout the game, we saw players like Jerome Baker, Eric Rowe, Xavien Howard, Byron Jones, and even Andrew Van Ginkel. Jerome finished with 8 tackles and a huge sack at the end to ice it. Rowe shut down Kittle to a tune of 4 catches for 44 yards. Xavien got an interception, which is his third game straight with an interception. Byron Jones seemed to be the missing piece that solidified the rest of the defense as Noah was not tasked with an impossible task. Lastly, one of my personal gems through my analysis of his tape, AVG. AVG was a wrecking ball off the edge all afternoon long, totaling 6 tackles 1 sack, 1 FF, and 1.5 TFL. For more in-depth on AVG.

Andrew Van Ginkel. This is another thread because of how much I love AVG as a player and how much he reminds me of Chase Winovich of the New England Patriots. 6 tackles 1 sack, 1 FF and 1.5 TFL in Week5 let's dive in:

The Coaching Staff all should get some credit for the game plan and adjustments made throughout the game by getting an early lead after a 4th down stop. After that momentum swing, it was all downhill for the 49ers. On the defensive side, the coaching staff placed their players in positions to succeed by eliminating the 49ers offense from ever getting in rhythm through the air. We realized early on that their secondary was extremely small, with the lone exception was Brian Allen, who was just activated this week. All game long we attacked a beat up and weak secondary. Preston being single teamed all game led to us hitting him early and getting him his 100-yard game as well as getting another huge game from Mike Gesicki.

I find it hard to imagine seeing Jordan Howard in a Dolphins uniform for very much longer. A random and surprise coaching decision to not dress Jordan for the game led to more of Breida and Myles taking over goal-line duties. I still am of the opinion that if Howard was given the same role and opportunity as Myles, he would more than show the skills that have made him a 1,000-yard RB in the league.

It seems counterintuitive that we would sit a talented RB while still averaging only 2.8 yards per carry before the game. That is unacceptable and by looking at the tape Myles is only getting whatever the offensive line is getting for him. I don’t see any explosive moves or ability to make a man miss and take it to the house and while Coach Flores has bromance for Myles, but we need to start getting the ball to Breida and even Jordan Howard. Think about this, Myles had a 21-yard run (his longest on the year) and had a total of 57 yards rushing on 16 carries. My math is funny sometimes but 15 carries for 36 yards equals 2.4 yards a carry. Unacceptable.

It’s becoming harder to see a world where Jesse Davis comes back to have his job on as the Right Tackle once Austin Jackson comes back from IR. Seeing both Solomon Kindley and Robert Hunt move bodies around all game long really showed that we have a solid foundation to build on and one which needs as much playing time as possible, even if it comes at the cost of veterans who are mere stopgaps for the future. By all indications our investments this past draft have been fruitful and eventually we will have an OL with 3 rookies playing and based off the early results, we have no need to feel nervous about saying that.

I really have a tough time understanding how a team that finished with 26 less points than us still manages to average 6.8 yards per carry totaling 131 for the day and 1 TD. Somehow while being up the entirety of the game, we still allowed San Francisco the ability to run the ball when they wanted to even though they had to throw it all game to try and get back into it. If this had been a closer game or even a game that San Francisco got a lead in, are we talking 200+ yards rushing being given up? It does little to play the what if games, but this is a trend that still has not been broken and with the potential loss of Davon Godchaux we lose one of our most experienced run defenders to an already porous rush defense.

Overall this team pulled off a great win which should show guys that these types of results are possible when everyone is playing together, mistake free and discipline brand of football. Coach Flores constantly preaches about each player starring in their role and if everyone can buy in to that we may be able to go on a little win streak here with the lowly but still rival New York Jets coming into town. 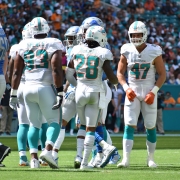 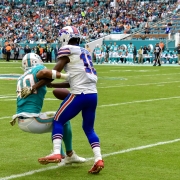 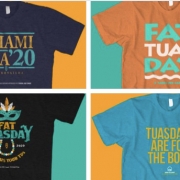 A Long Shot Signing, But There’s Still A Shot
Scroll to top