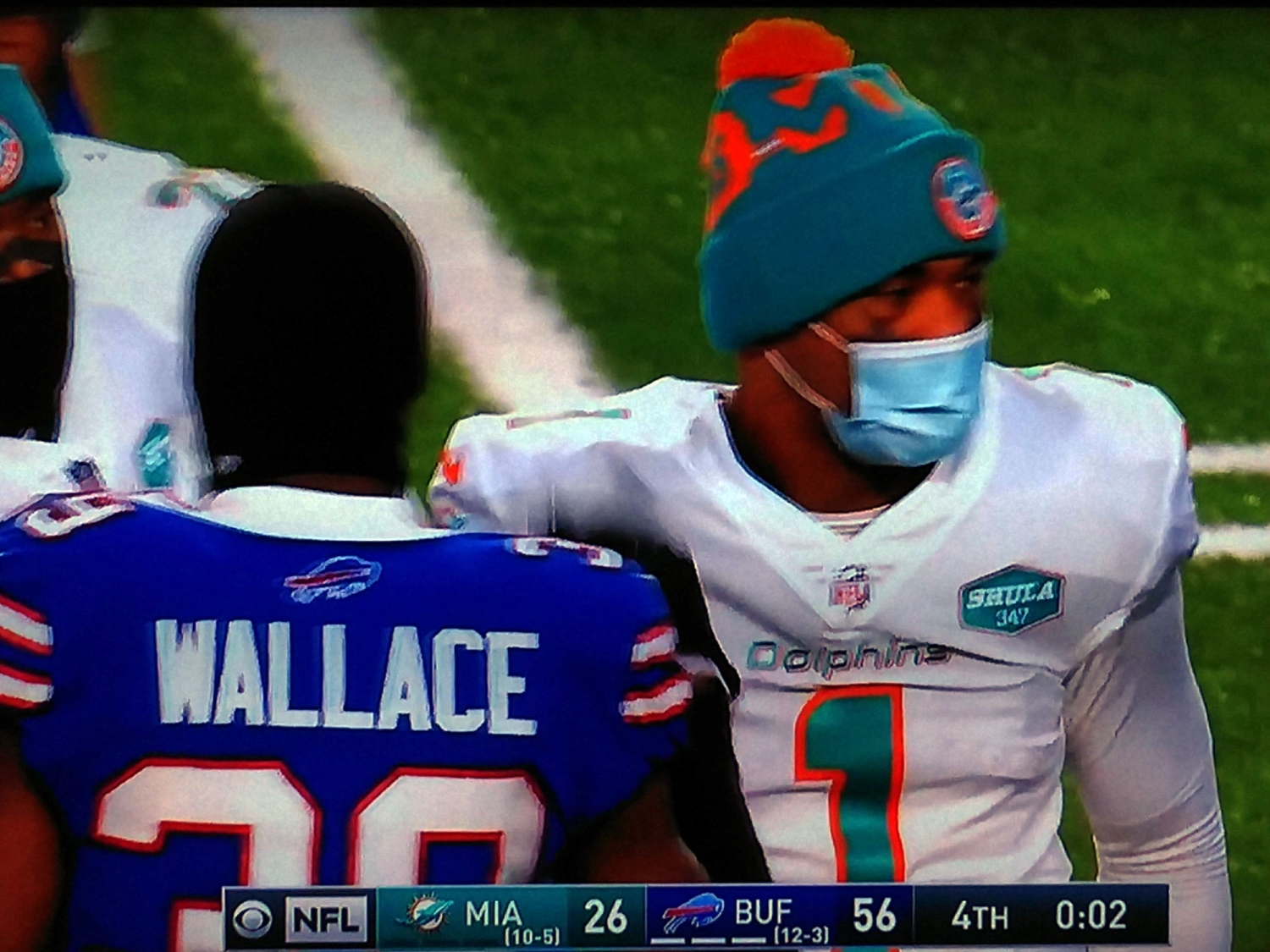 Though rookie quarterback Tua Tagovailoa said he and his teammates were left with “a bitter taste in our mouths” in the immediate aftermath of the 56-26 debacle Sunday at Buffalo. “That’s not the way we wanted to go down.”

As unpleasant as it was to watch, the cold dose of reality did provide an honest gauge to take into the offseason.

The Browns, Ravens and Colts did the Dolphins a favor by winning their games to bump Miami out the playoffs. At this point the Dolphins aren’t ready to compete with the teams like the Bills in the postseason.

The objective is to build a team that can.

Coach Brian Flores and GM Chris Grier are working on something that has a chance to be special, and this 10-6 season was a significant step in that direction. The offseason will offer opportunities to add much-needed talent, particularly on offense.

Who will Dolphins pick at No. 3?

The next few months will bring considerable debate about what to do with the third overall pick in the draft, the main spoil of the Laremy Tunsil trade with the Houston Texans.

The Dolphins can thank Ryan Tannehill and the Titans for clinching it for the Dolphins with Sunday’s last-second win over the Texans, 41-38. Tannehill’s 52-yard pass to set up the winning field goal was another Miami Miracle.

The hot topic will be, do they take Oregon tackle Penei Sewell or Alabama wide receiver DeVonta Smith?

Sewell is regarded as a generational talent, evoking comparisons to Hall of Famer Orlando Pace. Smith would Tagovailoa a familiar target from their time together at Alabama.

Sewell will become an instant force on someone’s offensive line. But the Dolphins have a crying need for receivers — more than one.

That was painfully obvious Sunday with 10 or 11 catchable passes that were not caught. It has been evident all season.

Tua’s three most aggressive passes were all dropped. Mike Gesicki down the left sideline, Isaiah Ford up the right side (commentator mistakenly said the DB broke it up, he didn’t), and Myles Gaskin on the scramble. All three hit the hands in perfect position. All dropped.

Debatable if is to high for Smith. Maybe the answer is to trade down with a team that covets Sewell in order to draft two premier playmakers.

Pick QB or stick with Tua?

There are some voices clamoring for the Dolphins to draft another quarterback, already sour on Tua. Despite a respectable first season with a limited offense — he came into the season finale with 65 percent completions, 10 touchdowns and two interceptions.

His three interceptions in the second half at Buffalo give them more fodder. The first, a pick-six, happened  because DeVante Parker fell down, the other two were on Tua.

I’m not surprised about either turning on him. This isn’t a market with a lot of perspective at times. https://t.co/K5PxiJIU67

I’m sticking with Tua. Tough to draw a conclusion on whether or not Tua is worthy of the franchise quarterback tag when he’s running the junior varsity offense.

Do Dolphins receivers ever get as wide open as the Bills’ crew was all day? Do Dolphins quarterbacks ever have all day to sit in the pocket like Josh Allen and Matt Barkley did all day Sunday?

And what of the play calling, which offensive coordinator Chan Gailey acknowledged last week has been more conservative for Tua than when Ryan Fitzpatrick is in the game?

Will Chan Gailey return as OC?

Whether Gailey, who turns 69 on Tuesday, is retained or retires is one of the key offseason questions.

Regarding Gailey and the play calling, Tagovailoa said: “I think me and Chan’s relationship is really good, and our partnership with what I kind of want called and the communication between us I think is really good.

“Just today, I don’t think I put us in a really good situation. With the defense giving us a turnover on the first series and not going down and punching it in, there was a lot of miscommunication on that first drive for us. …

“We need to be better in that aspect of opening up games. First drives, we’ve got to go down and give our team some spark.”

Inexplicably, Gailey waited until the Dolphins fell into a huge deficit to take the reins off Tagovailoa with more uptempo and downfield throws. The change brought an impressive 75-yard touchdown drive to open the second half, but the spate of interceptions followed.

It wasn’t just the shortcomings of an offense short on playmakers that led to the drubbing. The Bills torched Miami’s highly regarded defense and special teams too, producing touchdown in all three phases of the game.

The strange thing about Miami & Tua is they let him sling it all over the field vs KC & he almost won the game. Was Offensive Rookie of the Week. Since then they’ve gone ultra conservative. Just makes no sense & doesn’t really fit the “they don’t trust him” narrative.

Interceptions by Byron Jones and Xavien Howard (his 10th of the season, tying the franchise record) were the lone highlights for Miami.

“We didn’t play well as a team,” said Flores, who avoided criticism of Tagovailoa while distributing blame, but said, “That includes Tua. He’s got to play better as well. But everyone’s a part of that.

“Look, he’s played well over the course of the season. We as a team have played well. We didn’t have it today.”

As much as you want to see your team make the playoffs, it was difficult to root for that after the Dolphins turned in their poorest performance of the season.

On the surface the season-ending shellacking goes down as another in a long line of Dolphins dreams that have died at Buffalo. But the circumstance are different this time.

These Dolphins came farther and faster than was reasonable to expect in the second season of a complete roster reconstruction.

Next season expectations will be higher and the offseason will be about putting talent in place to meet them and avoid bitter endings like this one.

My gut feeling is Tagovailoa will be back as the starter and he will have more weapons at his disposal and a different OC calling the plays.

But as Tua said after the game, “I don’t think I have control over any of those things. I think all I can do is to continue to grow, continue to get better.”

Right, Grier and Flores will make those calls. Their jobs depend on it. They can’t afford not to get it right.