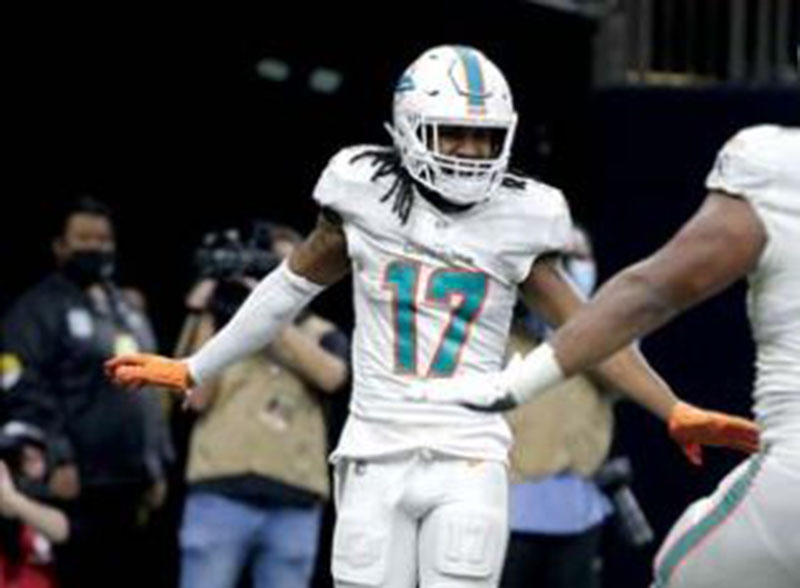 The debate around the Miami Dolphins never relents — constant dissecting of the quarterback, skepticism about their merit as a playoff contender.

The only responses that even matter keep coming in weekly intervals (with a longer gap for the bye week). The team left for dead at mid-season has done nothing since but win.

That’s seven in a row after Monday night’s 20-3 roll over the COVID decimated New Orleans Saints.

That’s seven resounding retorts to all the calls for heads to roll after the 1-7 start — Fire the coach! Fire the general manager! By all means, fire the quarterback!
Now, at 8-7, coach Brian Flores is on the brink of coach of the year with his team two wins from wrapping up a playoff spot in the AFC.

That’s how crazy this roller-coaster of a season has become. That’s how special it can still be.

As if that’s not intriguing enough, all that stands in the way of this latest Miami Miracle is the Dolphins’ previous never-quite-good-enough quarterback, Ryan Tannehill and the Titans, and forever nemesis Bill Belichick and the Patriots.

There’s no reason to look any further ahead than that.

That’s what tearing down the roster and reconstructing it was all about, right? A team that’s been slogging toward some vaguely defined future for two decades can finally just focus on the next two weeks.

Tua at best when he’s down

It doesn’t matter, for the moment, what Flores, GM Chris Grier and owner Steve Ross think of Tua Tagovailoa as the long-term answer at quarterback or whether they’ll look for an upgrade in the offseason. They’re winning with him right now.

No question, Tagovailoa lacks the dynamic arm of Dan Marino — and the Marino 2.0 they could have had, Justin Herbert. But the 40-yard fling to Mack Hollins on the game-clinching touchdown drive Monday night was on the mark and damned electrifying.

Waddle was another high first-round pick that critics were pooh-poohing after a handful of games. Now the speedy wideout is five receptions away from the NFL rookie record with 96 —  including 10 for 92 yards Monday. He has 941 receiving yards and five touchdowns.

Sure, you can gripe that Tagovailoa’s down-field connections are infrequent, his yards per pass paltry and that — much like Tannehill — he has a penchant for the bonehead play that can cost a game.

But Tagovailoa has also shown a knack for quickly atoning for his mistakes. He did that again Monday after serving a horribly thrown interception. He immediately rebounded by leading one of the best drives of the season: 86 yards in nine plays, including the big heave to Hollins, 24 yards to Waddle on a flea-flicker and capped by a well designed short shovel to Waddle for the score, sparking the latest rendition of the Waddle Waddle.

But here we are talking too much about Tua again. The story of the win over the Saints and much of the winning streak has been the Miami defense.
Granted, they racked up eight sacks and two takeaways, including a pick-6 by Nik Needham, against a Saints team devastated by COVID and forced to thrust rookie quarterback Ian Book into his first NFL start with insufficient support.

nik needham on his pick six: "that was great. i never had a pick six ever in my life. that was my first one ever. that was real cool. first play in, just get right out to it. https://t.co/rlQbk3TmQi

Nonetheless, this has shown to be a championship-caliber defense since getting back to the free-wheeling ways that worked so well last season with blitzes coming from all over the place while a talented secondary provides effective man coverage.

Mike Florio and Chris Simms, on Pro Football Talk, discussed the scheme as designed to “create chaos” and wondered why more teams don’t try the unconventional approach of deploying the front seven in an unrecognizable alignment.

The larger question is why the Dolphins got away from what worked so well last season in the first half of this one and got pushed around during the losing streak.

The Dolphins are on the brink of something historic, and it’s a great end of year gift to the South Florida sports scene at a time the games we love are being upstaged again by COVID chaos.

The Miami Hurricanes had to pull out of their bowl game. The Florida Panthers’ first legitimate pursuit of Lord Stanley since 1996 has been put on pause (hopefully resuming Wednesday).

If the Dolphins stumble in the next two weeks the focus shifts back to the future. For now, there’s no reason to look past Tannehill and the Titans.

It couldn’t be more simple or more dramatic.

What if the Orange Bowl ends up being the national championship game?