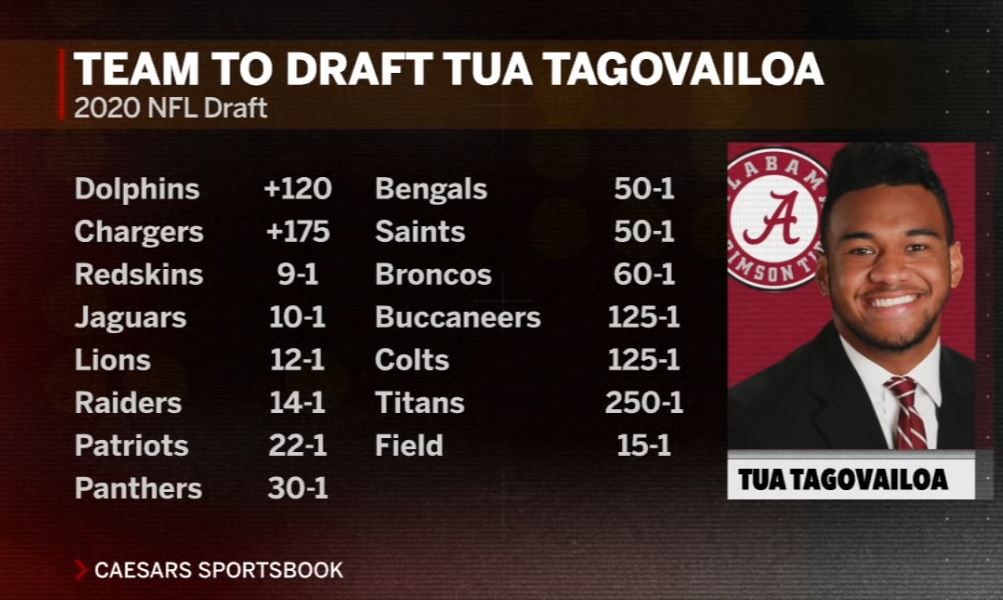 Finally, the day that everyone invested in the Miami Dolphins has been obsessing over for a year.

All the agonizing and analyzing, hand-wringing and hoping through a lost season has led to the most important draft in Dolphins franchise history.

Remember, everyone thought they were “Tanking for Tua.”

Now Alabama quarterback Tua Tagovailoa is within reach and there are plenty of NFL experts, followers and, yes, some Miami fans too, saying the Dolphins should resist the temptation of a very talented player with a troublesome injury history.

So what do the Dolphins do with the No. 5 pick in the draft?

They take Tua, of course.

Not as simple a call as it would have seemed months ago, before Tagovailoa’s college career ended with a serious hip injury.

Still, it’s the one Dolphins chiefs —GM Chris Grier, coach Brian Flores and owner Steve Ross — should make with their first of three picks in the first round. Even if they have to deal some of their ample draft capital to the Detroit Lions to move up to No. 3.

No question, there are legitimate concerns about Tua’s durability.

The Dolphins were dealt a problematic hand in this pursuit. It’s like being told, you can have your dream house, but it’s not constructed to South Florida hurricane codes and could blow away at any time.

But if not for those questions, Tagovailoa would be the No. 1 pick in the draft and out of Miami’s reach.

Fate has given the Dolphins a side door to the caliber of quarterback that has eluded them since Dan Marino retired. They have let too many others slip past them while shuffling through 21 imposters over two decades.

Ironically, it was Alabama coach Nick Saban saying this week it would be a mistake to pass on Tagovailoa over injury concerns. Saban, of course, doomed his tenure as Dolphins coach in 2006 when he opted for Daunte Culpepper after team doctors failed Brees over concerns about his shoulder.

Brees is still padding his Hall of Fame stats in New Orleans.

Dolphins fans haven’t forgiven Saban, and they will run this regime out of town if Tagovailoa goes on to have a brilliant career as a Los Angeles Charger.

Sure Tua is a risk. It’s why this draft holds more intrigue for the Dolphins than any in memory.

It’s also a risk to pick the wrong QB.

Herbert not the answer

In the days leading to the draft there has been a rising chorus of voices in the industry saying the Dolphins should pick Oregon’s Justin Herbert at No. 5.

Herbert may go on to a solid NFL career. He could also prove to be Ryan Tannehill II.

There is no evidence to suggest he’s the next Marino.

And with the 5th pick in a he nfl draft the Miami dolphins select Justin Herbert…. pic.twitter.com/tecKdiYwoc

Herbert is not a player you tank for. He has size and athleticism, but he is not a passer that excites like Tagovailoa. Not even close.

Tua has that magic touch you crave at quarterback. It’s been evident since he came off the bench to lead ‘Bama from 13 down to the national title as a freshman.

The only legitimate safer pick would be Joe Burrow, who is a lock to go No. 1 to the Bengals.

There’s no guarantee of longevity in the NFL with any pick. The Dolphins chose Jake Long over Matt Ryan in 2008, and the big tackle broke down prematurely. Ryan, who went to the Falcons, remains another reminder of a franchise quarterback that the Dolphins let get away (thank you, Bill Parcells).

Dolphins officials have played an impeccable poker hand throughout this process, carefully shielding their intentions. That is why there are so many differing claims about what they will do.

Tua Tagovailoa is literally begging to be a Miami Dolphin. Look at the colors he is wearing when spotted today. If the Dolphins don't draft him, there's gonna be a mutiny among us fans. pic.twitter.com/ZxCGb65iql

Numerous trade scenarios have been floated. The most audacious I’ve seen was a suggestion of the Dolphins dealing their latter two first-round picks and No. 39 in the second round to the Lions for No. 3. Then use it to take the top offensive tackle and still make their No. 5 pick for the quarterback of their choice.

The unknown is what another team, notably the Chargers at No. 6, would be willing to give to move up to 3, and what the Lions would demand.

The Grier-Flores leadership is also difficult to read. Personnel moves through the first year of the collaboration have been unconventional, often eyebrow-raising.

Don’t be surprised if they completely surprise in their approach to this draft.

Offensive tackle a must in draft

The Dolphins have a lot of needs and objectives. Regardless of which quarterback is targeted, they must come out of this draft with a cornerstone tackle to protect him.

They also must give him more playmakers to work with. There is depth at running back and receiver, which can be obtained beyond the first round.

Defense is always a priority for Flores. He can’t get enough secondary help and he desperately needs to upgrade the pass rush, even though free agency brought some help.

But it all starts with quarterback. There is a potential transcendent talent there for the taking, albeit with a concerning caveat.

Good to have for tomorrow for Dolphins fans. How to pronounce Tua’s full name. (Audio via ESPN draft vignette) pic.twitter.com/HRLbBRDEoX

Rodger Sherman, in a statistical analysis for TheRinger.com, showed that Tagovailoa has the highest passer efficiency rating (199.4) in college football history by a considerable margin, as well as the most adjusted yards per passing attempt and highest touchdown rate.

Tua also has that intangible quality that only the best possess.

Nobody better understands the need for self-preservation in moving to the pros than Tagovailoa, after what he’s been through.

He’s been working with former NFL quarterback Trent Dilfer on adjustments he must make, as well as with NFL coach Ken Whisenhunt on the  mental and technical side of playing the position in the pros.

i've never wanted the dolphins to draft a player as much as I do tua tagovailoa.

with that said, the last time it was even remotely close, this is what happened. #tbt pic.twitter.com/leJiF04Dui

Mistake to pass on Tua

Kirk Herstreit, one of the most respected observers in college football, says it would be a mistake to pass on Tua.

I agree — and horror of horrors, I agree with Saban as well — at least when it comes to Tua.

The Dolphins should take Tagovailoa, then spend the rest of the draft putting as many useful pieces around him as they can with the barrel full of picks at their disposal.

When all that is done, let’s hope there is a 2020 NFL season so we can begin to see how it all plays out.

Craig Davis has covered South Florida sports and its teams, including the Dolphins, for four decades. Follow him on Twitter @CraigDavisRuns

This is the Most Important Dolphins Draft. Ever.

Morning in Miami
Scroll to top