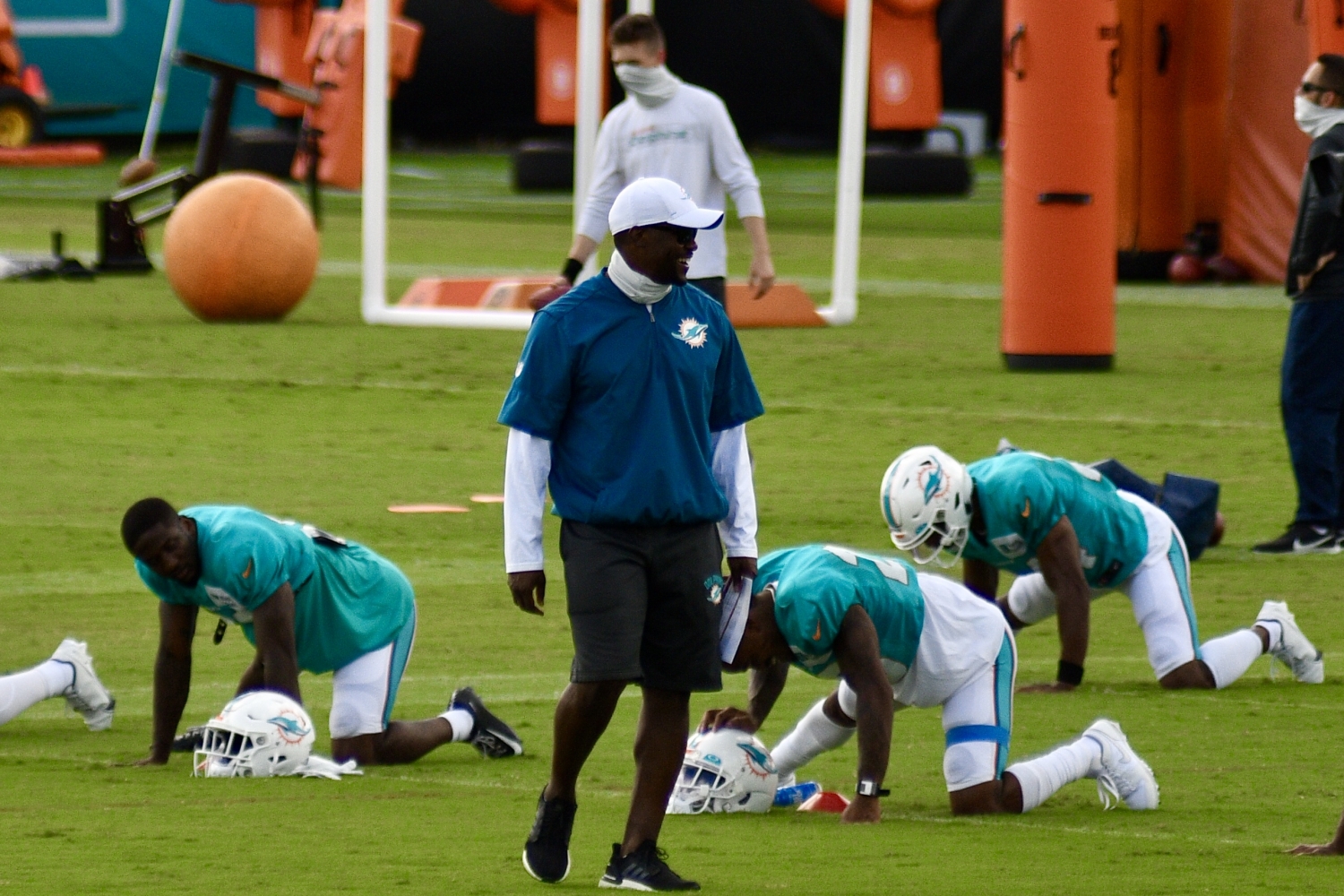 It’s a new year, and after a busy offseason expectations have been re-calibrated. Make no mistake this was a complete roster overhaul right down to jettisoning the “prospective” developmental quarterback Josh Rosen, in favor of a clearer hierarchy with the place holder in Ryan Fitzpatrick, and the QB of the future in waiting Tua Tagovailoa ready to take the reigns. A complete overhaul of the run game (which was historically inept), that came with a new 1-2 punch, a slew of interior linemen and two rookie tackles.

Now, we wait for the results.

So let’s examine what the national media thinks. Most seem to see this large influx of talent, via free agency, the draft, and just assume that — combined with the apparent demise of the New England Patriots — the rise of the Miami Dolphins is sure to come.

Others are just sold on Brian Flores, and why not?

The new coach’s roster last year was built to win no more than a game or two, and he won five, and were really close to winning two more (at Jets, home vs. Washington). The main reason the bandwagon has some passengers all of a sudden comes the exodus from Foxboro of the New England Patriots. Gone, is Tom Brady. There is no Gronk. They lost Kyle Van Noy and Ted Karras to division rival Miami. They had a league high eight opt outs, including top performers Marcus Cannon, linebacker Dont’a Hightower, and safety Patrick Chung. Make no mistake, this is a weakened Patriots squad, ready for the picking.

NBC's Peter King picks Dolphins to win AFC East and be 4th seed, behind Baltimore, KC, Tennessee. And (if you missed this), CBS/NFL Net's Nate Burleson said Dolphins have best chance of any team of becoming a dynasty excluding KC: https://t.co/dOm5zhhVkV

So let’s examine this Dolphins team.

You have to start with a philosophy. It seems to have built one, via their offseason acquisitions. They seemed to make a conscience effort to build a girthy and powerful offensive line, as they added an Offensive coordinator (Chan Gailey) that specializes in creating an interior run game based on power running.

They added one of the best one-cut backs in football, in Jordan Howard, and gave him a guy to spell him (Matt Breida), that can hit home runs from anywhere on the field. Solomon Kindley is “Jamie Nails” like, in that you have likely have not seen a man as big as Kindley move like he moves. Ereck Flowers and Ted Karras figure to be a decent double team combination to get their lead iso game going, and Robert Hunt is waiting in the wings, and will likely play a lot as a 6th offensive lineman till he takes over at right tackle. Arrow up on the run game.

How bout when they have to throw it? There is a quiet confidence in that building in Davie, that they might have replaced Laremy Tunsil, with one 1st round pick and banked the rest in the haul they received last offseason. Austin Jackson has been a pleasant surprise. The thinking at the time he was drafted, was that he was likely a developmental guy not ready to contribute. He will start at Left Tackle from day 1, prepared to defend Ryan Fitzpatrick’s blind side.

Regarding Ryan Fitzpatrick, rare is the situation where you can be confident in your aging, competent veteran QB, and know that there is likely an improvement waiting to take over on the bench (Tua). Chris Grier deserves some credit as of late, as well. After some nervous moments looking at this WR corps, Grier actively attempted to replace the opt outs of Albert Wilson/Allen Hurns, with the signing of Antonio Callaway and a trade for Lynn Bowden. The passing game powered by DeVante Parker and Preston Williams figures to be at the very least above league average, and if it’s coupled with a good run game, it should be enough to win more than you lose this season.

This team seems built to win games with defense, as here is where the most talent is concentrated. While depth is always a concern, that is true for every NFL team, except the very few that can boast multiple starter worthy players in their rotations. The Dolphins have that on two units on defense. The Defensive line is deep up front with 2nd year starter, (with a rededicated body) Christian Wilkins, steady producer Davon Godchaux, late season standout Zach Sieler, and promising rookie Raekwon Davis exhibiting that “1st round talent” all summer. On the outside, Shaq Lawson and Emmanuel Ogbah are massive improvements over what they had there last year.

Raekwon Davis is a Rorschach test, even for smart football fans, who seem to be polarized on the Dolphins 2nd round pick. But this is the type of thing I see on his Alabama tape a lot. Like him or hate him, the 6’6” & 311 lbs specimen with 7’1” wing span draws a lot of attention. pic.twitter.com/H30InsUXyX

The linebacking group is solid with the intelligent, versatile Kyle Van Noy, an athletic dynamo in Jerome Baker, and physical thumper Elandon Roberts taking the Mike Backer duties. There are capable players behind them in Kamu Grugier-Hill and Andrew Van Ginkel.

The secondary is the strength of this team and boasts the third of what could be a legendary 1st round haul int he 2020 NFL draft. Noah Igbinoghene has the look of a budding star, and we already know that Xavien Howard and Byron Jones are among the very best at the position. Nik Needham was very good last year and figures to take a step forward, as he adds depth to an already deep unit. In Bobby McCain, Eric Rowe, Kavon Frazier, and Brandon Jones, you have the best of all worlds, and a versatile playmaking group at safety. This is one of the best secondaries in the NFL. To complete the squad, the kicking game is in very good hands in Jason Sanders and Matt Haack.

So where are they going this year? How good, how many wins?

I see them as a team that is a “mile wide, but an inch deep.”

The Dolphins, in my estimation lack some depth to supplement that young talent. This will make the 2021 offseason a very important one. You can’t forecast injuries, so assuming health for the squad, the Dolphins should field a competitive, exciting young team this year. Their expectations should be in that 7 to 9 win range, so I will be the optimist, and say they sneak out out of the regular season with 9 wins, and a playoff berth, where I see them losing to the Houston Texans in the first round. Too much is going right for this Fins team, for Coach Flores and company to not take advantage of it.

The Extra Yard: Five things to watch Dolphins vs Patriots

Tyler Herro May Be the Future, But Also the Present
Scroll to top