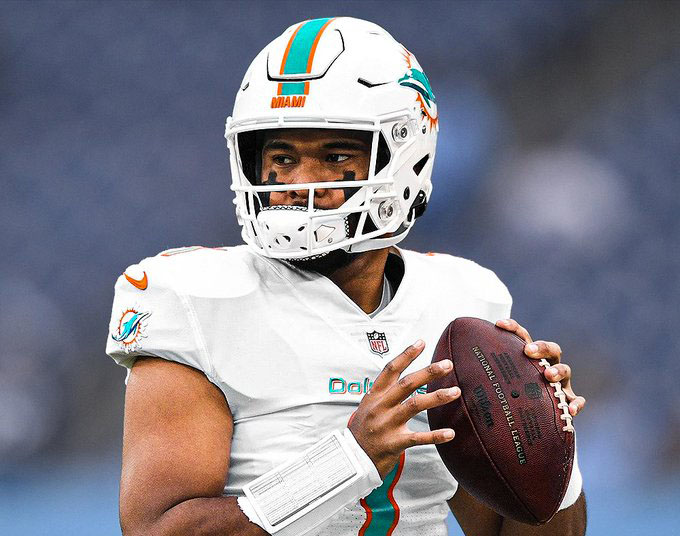 Maybe the Miami Dolphins will clinch that elusive wild card on Sunday. All they need is a win at New England — they’ve won four in a row against the Patriots — and a Jets loss at Seattle.

It would be a feel-good story with backup quarterback Teddy Bridgewater leading his hometown team into the playoffs. But it would mask the reality of the star-crossed Dolphins, who don’t seem like a legitimate playoff team while reeling on a four-game losing streak and with quarterback Tua Tagovailoa’s future again clouded by another concussion.

They have gone from having the upper hand in the AFC East at 8-3 to clinging to the hope of the final wild card in the expanded playoffs.

They have a porous defense with an injury depleted secondary that ranks last in the league on the road — and they would be on the road for the playoffs.

But Tagovailoa’s latest concussion is the biggest reason for the Dolphins’ not so happy New Year.

Tua’s unsteady December had already revived old questions about his ability to deliver at an elite level — he performed well at Buffalo but was poor to erratic in the other three losses.

It wasn’t even clear when he got hurt in last week’s loss to the Packers. His three interceptions in the fourth quarter sealed the Dolphins’ fate that day.

The two, and quite possibly three, concussions Tagovailoa has suffered this season are much more concerning for the immediate future of the franchise.

Durability has always been the main question about Tua. In college at Alabama it was lower body. With the Dolphins it’s been something every year. The recurring head injuries suggest his career may be on a short leash.

That farewell press conference, when a teary Tagovailoa steps to the microphone and says that in the interest of his own health and his family’s well being that he is done with football, could come at any time.

Here is a play vs the Packers that may have caused for concern👇pic.twitter.com/MIzrtWlNVl

Maybe at the end of this season. Maybe after a couple more knocks to the head next season. With multiple injuries to his brain, Tua has certainly entered a danger zone.

Tua may well return next week for the season finale against the Jets with a possible playoff start to follow. But uncertainty about the quarterback’s future puts the Dolphins in a predicament going forward.

They must decide by May whether to exercise Tagovailoa’s fifth-year option for 2024. Meanwhile, they are limited in resources if they decide he’s not the long-term solution they were banking on — or if his health prevents him from being that.

More from Five Reasons Sports: Three key for the Dolphins at New England

The Dolphins don’t have a first-round pick in the 2023 NFL Draft. They will enter the offseason with less than $5 million in cap space.

Rookie Skylar Thompson, who impressed in extended opportunity in the preseason, has flopped so far in limited time during the regular season.

So for the moment the Dolphins’ fate is in the hands of journeyman Bridgewater, who has his own history of concussions.

With high winds expected Sunday at Gillette Stadium, the Dolphins would be wise to saddle up their running game and hope the defense can hold a not-great Patriots offense in check.

If they succeed in making it five in a row against the Belichicks and the Jets return winless from Seattle, it will be Miami’s first trip to the playoffs since the 2016 season.

That’s not nothing, but this season held the possibility of so much more just over a month ago when Tua was leading a five-game winning streak and hearing “MVP” chants at home.

The picture isn’t so rosy now, even with a possible playoff trip in store. The franchise may be encountering stronger headwinds just down the road.