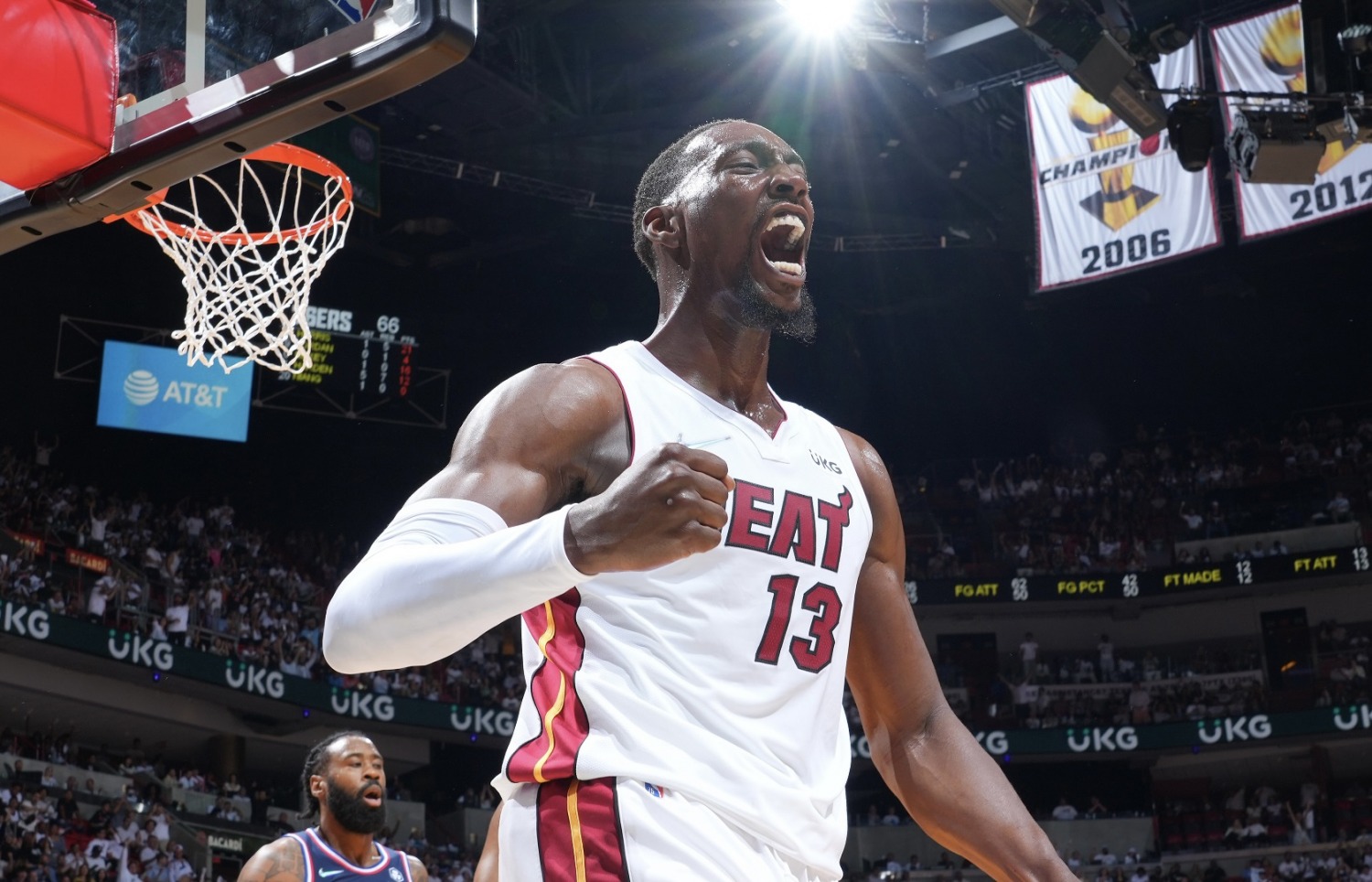 The Miami Heat officially finished off their series against the Philadelphia 76ers in 6 games, but there were pretty much 3 mini series within this match-up.

The first two game slate was its own adventure. No Joel Embiid meant the total focus was on the perimeter guys in James Harden and Tyrese Maxey, which fell right into the Heat’s hands at the time.

Or should I say, it fell right into Bam Adebayo’s hands.

There simply wasn’t much worry about DeAndre Jordan or Paul Reed on that backside, meaning they felt comfortable switching everything. And well, I mean everything.

Adebayo found himself out on the perimeter against Harden very often, which usually led to weak-side swing for another guy to go to work. That led to the Tobias Harris scoring trend, but the Heat were very comfortable allowing that to be the release valve.

Plus when Adebayo guarded Maxey in this series, he shot 4 of 13 from the field. Off first glance, holding a player of that caliber, and with that speed, to 31% shooting is a win in itself, but the true win is that he was only willing to take 13 shots through 6 games while he defended.

Now onto the second part of this mini series, the two game slate back in Philadelphia was a completely other challenge. Aside from the shooting taking a total dip, Embiid now returned to the floor, meaning it was no longer about controlling and blitzing the perimeter. The pressure was all about Embiid in the middle of the floor.

Even though the 14 of 65 shooting from three was the story for many, Erik Spoelstra came out after those games and said it was more about the defense. For the public, that’s just one of those cliche sayings that coaches like to harp on, right?

Adebayo did his job even in those games, while the Heat bothered Embiid enough, but the back-side help had become problematic. With all of the switching, Jimmy Butler or PJ Tucker would find themselves fronting Embiid as Adebayo blanketed the perimeter.

Why is that important? Well, although Butler and Tucker did a good job of that, if Harden dropped that pass over the top, guys like Max Strus, Kyle Lowry, or Gabe Vincent were the back-side help to stop Embiid off the catch. Clearly, less than ideal.

So an adjustment has to be made. The series is even at 2-2, and Philly has all of the momentum. You can say it’s just about making shots heading back home, but what is the schematic counter to this comfortable Philly offense?

Adebayo was no longer making highlight mixtapes out on the perimeter, locking up a guy like Trae Young 5 steps beyond the three-point line. The switching was eliminated. It was all about guarding your yard, fighting through screens, and simply, going drop.

(And yes, now that the series is over, I can talk about it exclusively without this happening)

Going away from the switching is basically a way to say, ‘I want Bam Adebayo near the opposing team’s best player at any cost.’ And yet, Adebayo didn’t really leave Embiid’s side in games 5 and 6.

Front, deny, contain, repeat. It was a simple “process” for Adebayo and the Heat, all due to the fact they trust Adebayo so much even when facing an MVP caliber player. And yes they sent plenty of doubles, but this base allowed them to operate much looser.

Whenever you hear about things that don’t show up on a stat-sheet with Bam, just watch the clips above for reassurance. That’s essentially three different turnovers that he forces due to his battles down low with Embiid, yet no credit for that is shown anywhere on paper.

His entry pass denial is something I’ve talked about nonstop all season, since I believe it’s probably the most underrated part of his defensive toolbox.

Not only can they not get it over his physical build, but just seeing him in fronting position leads to constant weak-side swings to get the ball away from that action.

He’s an action wrecker. But more importantly, he’s Erik Spoelstra’s mobile key-card on the defensive side of the basketball.

Now, this is still Joel Embiid. You can’t deny him every play, so what happens when that entry pass is made?

For Adebayo, it’s a spin in containing position, waiting for his face-up attack, and just reacting to it all. He keeps his hands active, his feet moving, and makes jump shooters uncomfortable even when measuring 7 feet tall.

Please, just take 1 minute out of your day to watch the clips in the video above to see his contests.

Not only was he forcing misses, the shots from a guy that finished second in MVP voting weren’t even close. (His injuries were also a major factor, but Bam deserves most of the credit here.)

In the two games that Miami shifted to drop, which included games 5 and 6, Bam held offensive players to 34% shooting, while also limiting Embiid to 11 of 29 shooting throughout the entire series.

Those numbers aren’t normal, but we accept them as such whenever discussing the game of Bam Adebayo. This Heat defense as a whole deserves an enormous amount of credit, but the Heat exploding in the final two games of the series to clinch their way into an Eastern Conference Finals appearance was spearheaded by two people: Bam Adebayo and Erik Spoelstra.

I would like to mention as well that it wasn’t all about drop coverage and fighting through screens. In the limited minutes that Adebayo played when Embiid was off the floor, Miami went right back to the soft switching.

Bam’s guarding Paul Reed, yet quickly switches onto Maxey. But Maxey does what every offensive player does when that switch is made: swing it right back to that weak-side away from Bam.

Harden begins to take Oladipo off the dribble, but Bam is there at the nail. He’s able to do that freely since his recovery speed on close-outs is a personal advantage of his. Now Harden fumbles the ball, picks it up, and starts over again doing the same exact thing as Bam recovers to Maxey.

But well, Bam is coming right back again. Harden crosses inside, Bam swipes perfectly to strip the ball, and it heads in the opposite direction for a Herro lob and a Bam (semi) dunk.

It’s clear that he dominates the defensive side of the ball with his complete physical gifts to be able to swiftly cover every inch of the floor, and every player on the floor.

But as much as this is the focus, don’t overlook his defensive IQ and overall reads on that side of the floor.

The 76ers set up a flare screen for Niang to fly off, as Strus elects to blitz Harden and recover. But Bam is sitting there lurking like a corner-back in the flats, and picks it off for a dunk due to the lazy Harden pass.

Should I say it again? This type of stuff is special. Jimmy Butler has carried them to the finish line in this series. Tyler Herro has been the focal point of the offense in terms of grabbing a hold of the defense’s attention. Role players like Max Strus, PJ Tucker, and Gabe Vincent keep coming up big whenever they’re needed.

Yet, in my opinion, Bam Adebayo was the story of this series. He was 5 of 5 last night from the field, yet that doesn’t seem to matter. All of the talk was about this overwhelming offensive big man looking to dominate the interior, and Bam showed up big.

And now, he’s going from dominant force in Embiid, to potentially a dominant force in Giannis Antetokounmpo. Yet, nobody on this Heat team feels some type of way about that match-up. Bam can handle it, and Spo will put him in those spots to be successful. 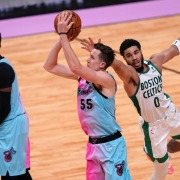 How is Duncan Robinson Being Defended? 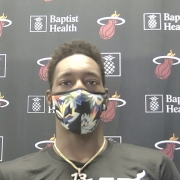 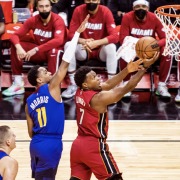 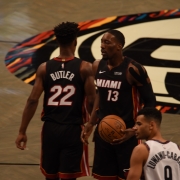 Some Takeaways from Adam Simon Press Conference on Draft
0 replies