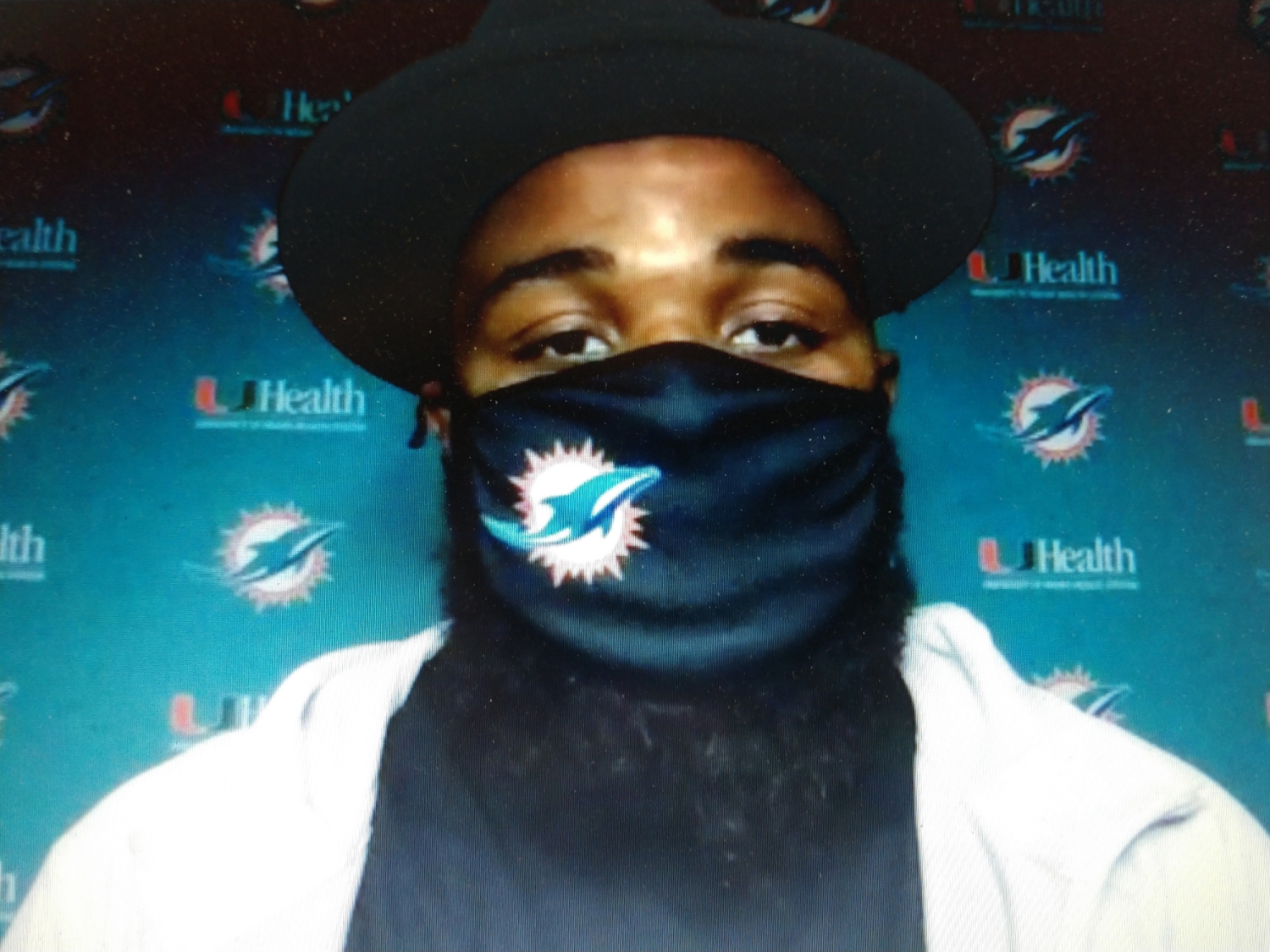 First thought on the Miami Dolphins’ season-opening loss at New England, you’ve just got to tip your hat to Bill Belichick.

The Patriots coach let the GOAT quarterback walk, shrugged off eight players opting out of the season and he simply schooled former pupil Brian Flores’ team all day long in a 21-11 clinic Sunday at an empty Gillette Stadium.

The Dolphins gave themselves a chance with a big-time strip of N’Keal Harry by linebacker Jerome Baker to force a turnover at the Miami goal line, followed by an 80-yard touchdown drive to cut the deficit to 14-11 in the fourth quarter.

That was the high-water mark for Miami. Cam Newton and the Patriots offense then asserted their will as they did all day with a 75-yard scoring drive of their own.

Brian Flores the man of the moment for Miami Dolphins this season.

Any hope of another Miami Miracle was stifled when Ryan Fitzpatrick’s third interception of the day put the cap on a sobering opener.

So, Belichick moves a win closer to Don Shula’s all-time record, now 42 behind with 305. And the Dolphins move another game closer to Tua time.

That won’t come at next week’s home opener against Buffalo. Nor should it.

But Fitzpatrick’s 44.6 passer rating with no touchdowns and three picks wasn’t up to the standard he exhibited in leading the Dolphins to five wins over the final nine games last season.

“I would say their secondary played better than I did today,” Fitzpatrick said.

That couldn’t be blamed on lack of protection. The rebuild offensive line, with four new starters including rookies Austin Jackson (left tackle) and Solomon Kindley (right guard) was arguably the most encouraging aspect of the Dolphins performance.

There was one sack on the final drive. But Fitzpatrick wasn’t running for his life as was often the case for Miami quarterbacks last season.

“I didn’t really get touched a whole lot back there,” Fitzpatrick said. “Just in terms of their mood and mentality and the way they were in the huddle, I thought that was all really good to see. Definitely a different vibe out there with no fans, but those guys were into it, and from what I can tell I thought they did a nice job.”

The line’s performance on run blocking left room for improvement, with a 3.2-yard average and 87 total yards.

The Dolphins did get unexpected production from second-year back Myles Gaskin, with 40 rushing yards on nine carries as well as four receptions for 26 yards. Veteran offseason acquisition Jordan Howard contributed only seven yards on eight carries in a forgettable Dolphins debut.

Miami receivers had trouble getting open against the Patriots secondary, aside from DeVante Parker, who had four catches for 47 yards. But the Parker injury factor reared again when he left in the second half with a hamstring strain.

A bad hammy in Week 1 with a notoriously brittle No. 1 receiver doesn’t bode well for the weeks ahead.

On the topic of bad, there was the cringe-worthy showing of the defense, which seemed befuddled and unprepared to deal with quarterback Cam Newton’s running and sleight of hand on the read-option.

Dolphins defenders were reacting a step late rather that anticipating all day.

Cam Newton celebrates his first win since 2018 by trying to fight the entire Dolphins organization pic.twitter.com/EhCHhqXpFC

In addition to Newton rushing for a game-high 75 yards on 15 carries, including two touchdowns, other Patriots runners sliced through the Dolphins with alarming ease on the way to 217 total yards, averaging 5.2 a try.

Dolphins frustration was evident in a testy encounter with Newton after the game.

As much as the Dolphins concentrated on beefing up the defensive front and linebacker corps with draft picks and signings, the Patriots were still superior up front. That’s been a New England staple, and the Dolphins haven’t closed the gap.

Here is Cam Newton’s answering questions on what unfolded at the end of the game with a couple Dolphins players: pic.twitter.com/T4nQctEvO5

Another running QB next week

At one point Flores could be seen chewing out his defensive unit on the sideline. They are certain to hear a lot more this week as they prepare for another running quarterback, the Bills’ Josh Allen.

Baker had an interesting day, good and some bad. In addition to the forced-fumble on Harry, the third-year linebacker had a sack and was credited with 16 tackles, but also committed two major penalties. Rookie safety Brandon Jones had 10 tackles but was called for a roughing-the-passer penalty that was questionable.

This Miami Dolphins season is about more than football

Christian Wilkins continued to emerge as a force on the defensive line. He had a sack, two tackles for loss and batted down two passes at the line.

But none of that added up to an effective answer to former MVP Newton in his first game as successor to Tom Brady in New England.

“Cam is still Cam, former MVP,” Wilkins said. “We definitely respected his talent on the field. … Today we got a little sloppy, we got a little undisciplined. Also, we’ve got to come together and play better defense.”

And, oh, my, how Belichick and his coordinators coached rings around Flores and Co.

“We’ve got to do a better job as a team. We didn’t do enough to win today,” Flores said.

Five Reasons to Like the Canes Win Over UAB