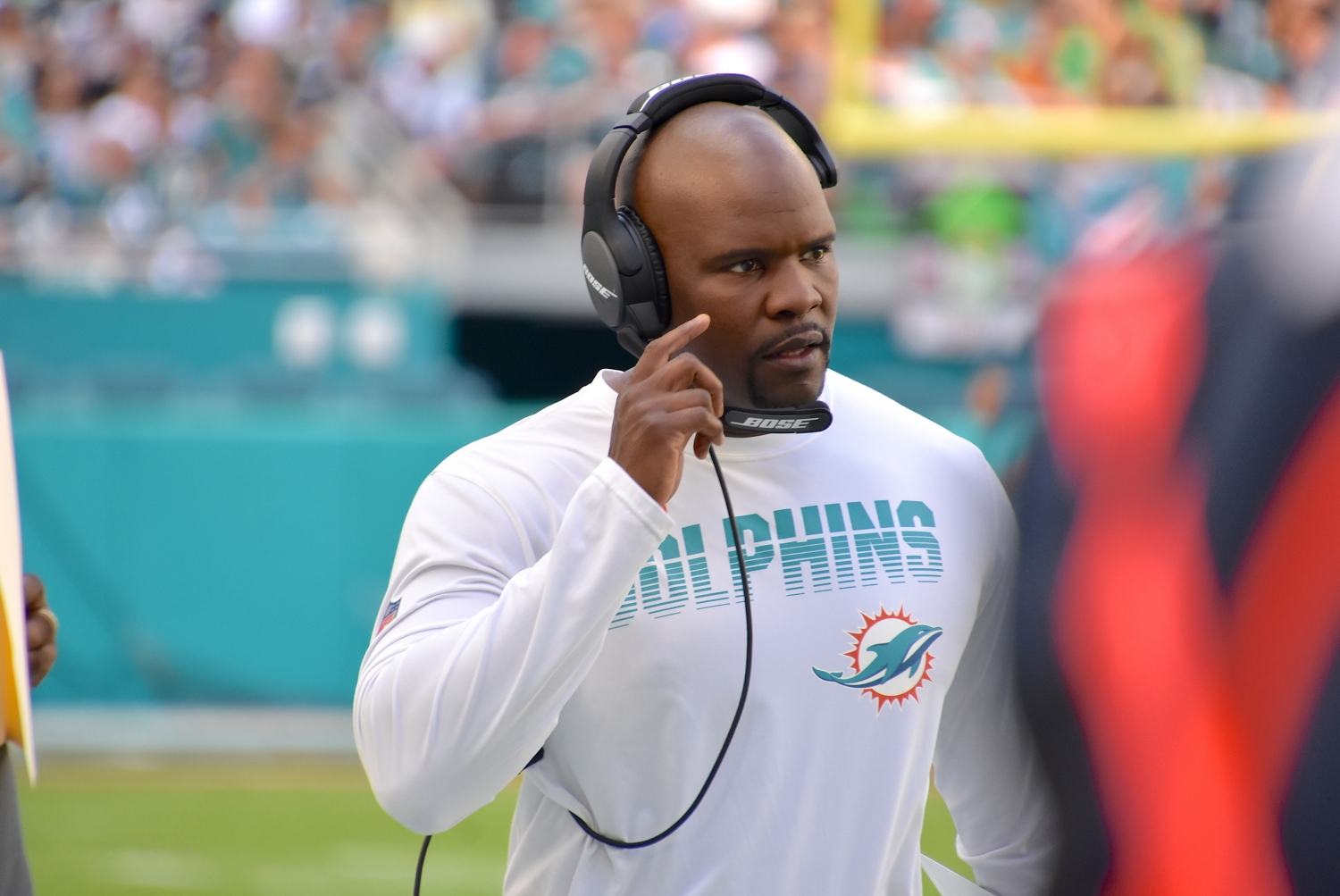 Some already recognizable by a single name.

For the Miami Heat, bound for the Eastern Conference finals, there’s Jimmy (Butler, the veteran exception, spearheading this run in his first season in Miami), Bam (Adebayo), (Tyler, we didn’t have to wait for another) Herro.

But the pivotal character in this certain-to-be most unusual Dolphins season isn’t Tua Tagovailoa immediately emerging as the team’s first star quarterback since Dan Marino retired two decades ago, though it would be a welcome development.

Coach Brian Flores is the Man of the Moment for Miami in 2020 — the man on the spot.

Will Flores be the first to cast an enduring name as Dolphins coach since Shula? Or will he come and go in the blink of a Gase?

However it plays out, Flores is a fascinating figure — a man of action, a man of principle, a man of the times.

For now, might as well call him “Sir” and get out of his way. Because Flores is coming straight at you and not yielding.

“If my father was a solider, but the cops killed my brother, do I stand for one but kneel for the other?”

Damn good question. Playing the black national anthem before NFL games is nothing more than an empty symbolic gesture.

Flores has been outspoken about racial inequality in the country and relates it to his experience growing up as a Black man of Honduran descent in Brownsville, Brooklyn, one of the roughest parts of New York City.

He was fully involved in the powerful video Dolphins players released Thursday, featuring verse about racial issues and explanation of why the team intends to remain in the locker room before Sunday’s game at New England during the playing of the national anthem and the Black anthem “Lift Every Voice And Sing.”

This Miami Dolphins season not just about football

He is similarly principled in his approach to running a football team. Ultimately, that’s how he will be judged here.

This second season at the helm should start to tell about the direction of the rebuilding collaboration between Flores and general manager Chris Grier.

But make no mistake, this is Flores’ team. Through an extensive roster makeover since he was hired in 2019, the coach has gotten the type of players he wants to mold under his philosophy. Those who haven’t fit or bucked the program have quickly been shown the door.

Those have included accomplished talent such as Minkah Fitzpatrick, Kiko Alonso and Kenny Stills.

Some of Flores’ methods have been eyebrow-raising, such as the practice-field stream of Jay-Z songs to get under Stills skin and motivate him. It didn’t go over well, and Stills was traded soon after.

It also remains to be seen how Flores’ in-your-face, no-nonsense approach will endear him in the locker room over the long haul.

“I coach guys hard. I’m demanding. I’m still that way and I’m going to be that way,” Flores said this week.

It should be noted, though, that he has made an effort to get to know his players away from the field and taken an interest in their lives. Also, several veteran free agents who worked under or were well acquainted with Flores on the Patriots elected to sign with the Dolphins this offseason.

Still, he is still finding his way as a head coach. Some decisions have been head-scratching. Certainly, some of the personnel decisions by Flores and Grier have been questionable.

They quickly discarded injured fifth-round pick Curtis Weaver, an edge rusher with potential, when they could have kept him for the future.

Oddly, they drafted a long snapper, Blake Ferguson, in the sixth round when they could have taken another promising edge rusher and South Florida product, Jonathan Garvin, a former Miami Hurricane who went in the seventh round and earned a job with the Green Bay Packers after an impressive training camp.

Then there was the failed experiment with quarterback Josh Rosen, who they acquired for a 2019 second-round pick and a 2020 fifth-round pick, only to release him this summer.

An interesting viewpoint on that was presented by Kyle Crabbs of thedraftnetwork.com, who argued that if the Dolphins hadn’t traded for Rosen they probably wouldn’t have been in position to draft Tagovailoa at No. 5 this April.

That is partly predicated on Rosen’s three ill-fated starts. Had Ryan Fitzpatrick been in there instead, particularly for the Washington game in which the veteran nearly completed a remarkable comeback in relief of Rosen, the Dolphins may have finished with at least one more win in 2019. That would have given them the No. 8 pick and Tua would have been out of reach unless they traded up.

Flores’ view: “You don’t hit on every player, on every trade, on every draft pick. Show me a team that’s hit on every one. And I’ll applaud that team.”

We will begin to find out Sunday if Flores/Grier made the right choices in the 2020 draft and free agency.

Draftees Austin Jackson (left tackle) and Solomon Kindley (right guard) are already starters on the offensive line and Robert Hunt is a prime backup at guard and tackle.

On defense, cornerback Noah Igbinoghene and d-linemen Raekwon Davis and Jason Strowbridge are expected to have immediate situational roles.

Versatile receiver Malcolm Perry, a seventh-round pick who was a quarterback at Navy, has gotten favorable reviews. They picked up a similarly intriguing player, Lynn Bowden Jr., in what amounted to a swap with the Raiders for 2017 second-round pick Raekwon McMillan.

No doubt Flores has more talent available in year two. It’s up to him to fit the pieces together and make them work.

Eventually he’ll decide when the time is right to unleash Tua.

Flores earned himself some capital last season by coaxing five wins out of a roster that was stripped down and constantly churned until a team that started 0-7 went 5-4 over the last nine weeks.

Fitting that it begins Sunday in New England, where Flores made his mark as a Super Bowl champion defensive coach and where 2019 ended with a 27-24 Dolphins win that mark the conclusion of Tom Brady’s remarkable run with the Patriots. Remember, the Patriots overran the Dolphins 43-0 in Week 2.

Five things to watch for Dolphins vs. Patriots

Because COVID canceled the preseason, we’ve never known less about a Dolphins team going into the opener.

Maybe some of these Dolphins rookies will make names for themselves in the NFL quicker than Tua. If so, they may help keep Flores’ name relevant in Miami for quite a while.

Flores, Dolphins once again at the forefront of change

Heat’s Goran Dragic, on a Tear, is Hardly Done
Scroll to top